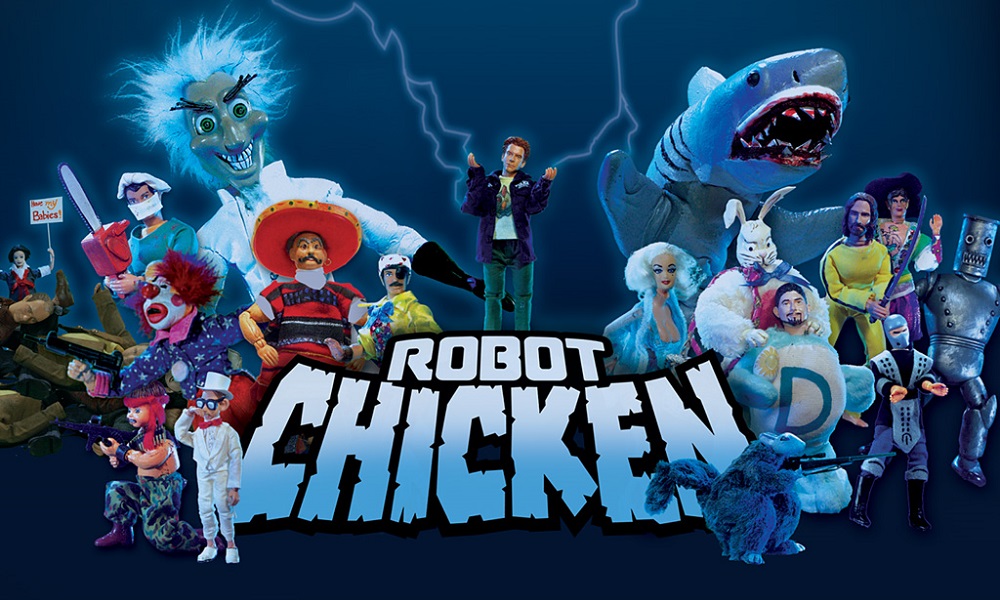 As you may expect, Robot Chicken’s seventh season runs exactly, precisely the way that seasons 1-6 do: reliably demented StonerVision drawing upon Generation X’s vast reserves of pop-culture minutia to make us laugh any way we can. That gives it an endless array of topics to cover, and their staff of writers turns cartwheels to… well to keep things exactly as they have been for the demented stop-motion series. The good news is that they’ve lost none of their snap over the years, and this most recent collection remains as fresh and outrageously funny as previous seasons of the show.

Of course, “funny” is in the eye of the beholder, and if you aren’t on the show’s sick little wavelength by now, there’s nothing for it. Robot Chicken basically acts as a filthy play-time for grown-ups, with jury-rigged action figures playing out various demented sketches that play on our nostalgic expectations to hysterical effect. Each episode runs about 15 minutes, making it easily digestible in small doses and large alike. And if you can spot which toy line the figures come from, the comedy practically writes itself.

It also pays to get a number of spot-on guest voices to get into the act, in addition to a talented stable of regulars. A Punky Brewster-based sketch, for instance, becomes a lot funnier with Soleil Moon Frye actually voicing the character, and the show runners know how to deploy their guest stars to maximum possible effect. (Freshly minted Oscar winner J.K. Simmons scores a season high point as Halo’s Master Chief.) And yet those cameos never feel like a stunt: just the best way to mine a few more giggles from us before zipping on to the next sketch.

That speed on its feet as always been one of Robot Chicken’s key to success, a technique they liberally borrowed from Monty Python, but which serves them no less well here. Whenever the bit runs out of gas, they just change the channel to another one, in keeping with our blip-vert pop culture and letting it feel fresh despite being relegated to the relative shopworn confines of a variety/sketch show. It usually involves a movie, TV show, toy line or the like (some of which can get pretty obscure) and applying a bit of NSFW logic to their familiar tropes. 80% of the time, it scores big, and even when it doesn’t, the bad bits are over too quickly to care.

That makes it reliably entertaining at worst, and at times, it tickles the fringes of genuine greatness. Listening to the DVD’s extras, you quickly start to understand why. The writers and show runners clearly adore each other, and feed off of their iconoclastic energy to avoid slipping into self-importance or boredom. They love what they do and it shows… whether or not you choose to enjoy it in an altered state of consciousness. It may just be a goof, but it finds its own energy, and while it lacks the political savagery of South Park, it creeps closely behind it in its spot-on send up for our pop-culture hang-ups. And it does so without ever emulating any other show. Robot Chicken has its own unique way of looking at things, which you can’t easily replicate anywhere else. That makes it one of the nicer (if dark and quite raunchy) corners of television these days. If the Season Seven DVD is any indication, it’s not going to slow down for quite some time.

The disc, surprisingly wasn’t made available on Blu-ray. Only DVD, which makes one wonder if it’s not all part of an elaborate prank. The shows themselves are presented with resolute straightforwardness on two discs, along with a consistently amusing audio commentary for each one. The extras are just as amusing, consisting of a number of behind-the-scenes docs – including one very funny one where they put that “sugarless Gummi Bear” urban legend to the test – and a fair number of cut scenes. All of them are as amusing as the show itself, and while its stoner credentials are on full display, you can watch most of these cold sober and still gain a huge number of laughs from it. That helps make up for such short running times for each episode. It’s hard to hate goofballs like this, as this very funny collection makes clear.