The Jack the Ripper murders have captivated the world for well over 100 years as modern day investigators using the latest in technology seek to unlock the mystery of the killer’s identity. Whitehall Mystery takes 2 – 4 players back to the dark, grimy streets of London’s Whitechapel area circa 1888 for this engrossing mystery board game pitting the killers vs. 2 – 3 investigators. 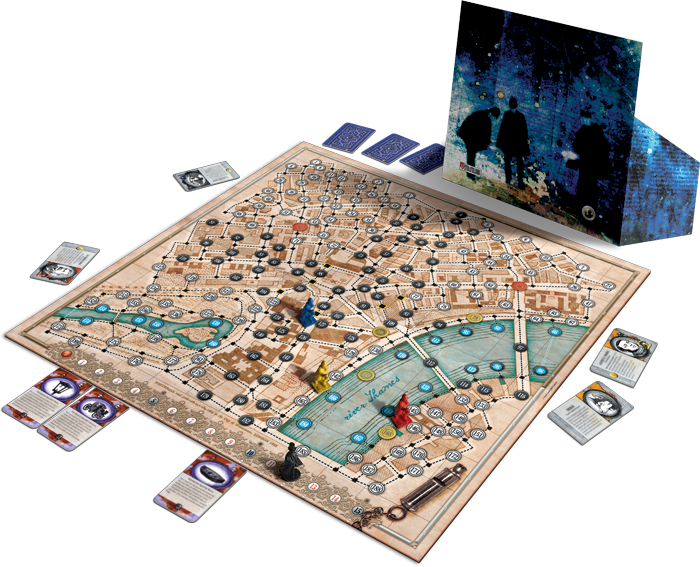 The gameplay is similar to that of Letters from Whitechapel and is written by the same authors so a familiarity with that game will give you a leg up. The game board in Whitehall is smaller than Whitechapel’s although there are nearly as many move spaces creating for a maze-like, claustrophobic setting not unlike those deadly streets of London.

One player plays the killer and begins the game by selecting four spots on the map to hide body parts which remain hidden to the investigator players. In fact, as you may have guessed if you had played Letters from Whitechapel, all of the killer’s moves remain hidden. His goal is to skulk around the city and get to each of the four locations within 15 moves. Every time he reaches one of his spots his move count renews to 15. The killer must reach all four spots without being caught in order to win the game. Jack’s (the killer) movements are kept secret behind a special screen which you might be familiar with from other hidden movement games.

Meanwhile, on his trail are our investigators, 1 – 3 players which reduces by two the number of players from Whitechapel. Each turn the murderer moves one space and writes it down, then each police pawn moves either 0, 1 or 2 spaces, and then each man can either “Check for Clues”, which forces the murderer to place a nicotine-coloured disc on any spaces near the bobby that they’ve passed through, OR the bobby can end their turn by “Arresting” a designated circle. If the killer’s on that circle right now, the police win the game. 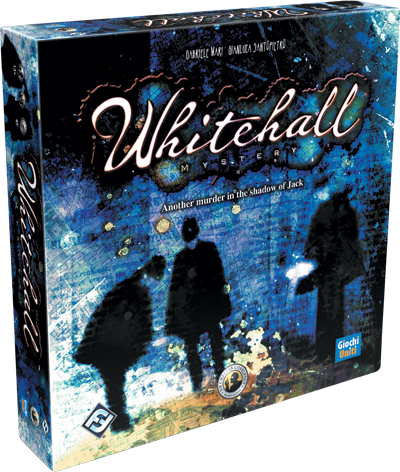 The killer and investigators all have special movement cards that they can utilize. One can employ a police dog which can sniff out clues while the killer can move via carriage or boat to avoid detection. The investigators work together (or not) to try to deduce the killer’s movements and uncover enough clues to eventually make an arrest and win the game.

Whitehall is a less complex version of Letters from Whitechapel. The rules have been stripped down to the basic elements but don’t think for a moment that this makes the game any less fun or engrossing. It doesn’t. To the contrary it removes some of the extraneous complexities and makes for a different but fun and fluid game to play. While it’s possible to finish in an hour the game can definitely run 2 – 3 hours depending upon the skill of the players, particularly the one playing the killer.