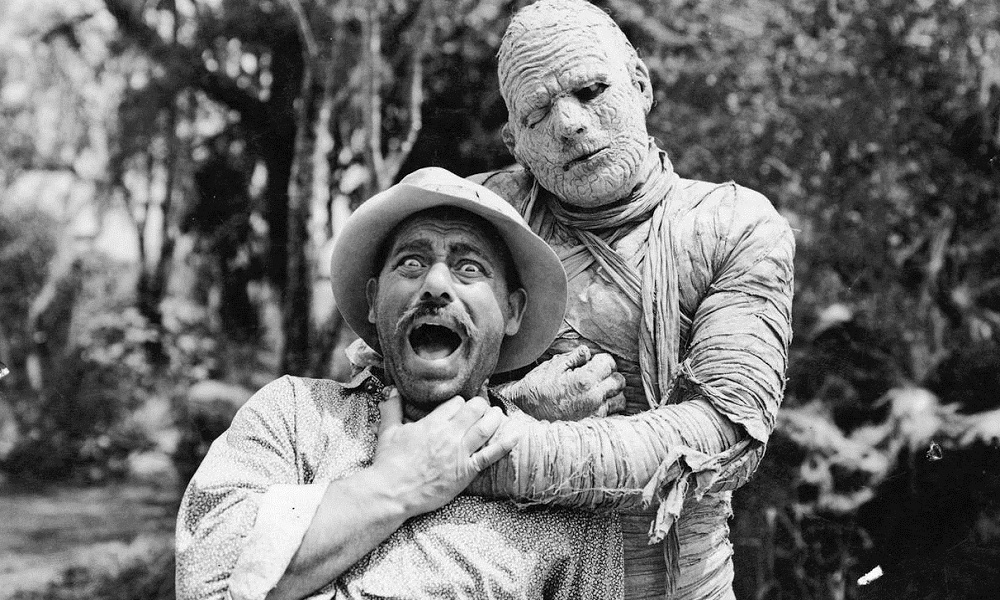 “The Mummy’s Tomb” is a direct sequel to the “Mummy’s Hand”. The second sequel brings two major changes to the series. First up is that the action moves from Egypt to the United States and would remain there for the rest of the series. This is a key change as it brought the horror home to everyday America whereas earlier Universal Horrors typically took place overseas. The other key change is that Lon Chaney Jr. would step into the role as the Mummy, Kharis, giving the series more star power and name recognition. 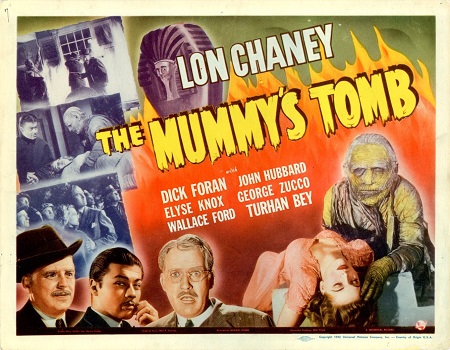 This film takes place 30 years after the last one. Universal was now churning horror films out like a production line, fast and cheap and it was a successful formula. Nearly the entire first 12 minutes of the movie re-uses footage from The Mummy’s Hand as Steve Banning, now an old man, relates the events of discovering Ananka’s tomb and fighting the Mummy Kharis, to his son, John and his fiancée Isobel.

Both High Priest Andoheb (George Zucco) and the mummy managed to survive their apparent deaths in “The Mummy’s Hand”. Andoheb passes on the secret of Kharis and the Tana leaves to his acolyte, Mehemet Bey before finally passing away. Bey, with Kharis under his control, heads to Mapleton, MA to exact revenge upon Banning and his family for desecrating the tomb of Ananka. The mummy kills the elder Banning and his daughter, Jane.

Steve Banning’s old friend Babe Hanson (renamed from Jensen for some reason) arrives after the murder of his partner claiming it was the mummy. The local sheriff thinks he’s nuts until mold is found on the victims which a local professor confirms as being from a mummy. The formula of these films always finds the villain becoming infatuated with a woman and this one is no different. Bey uses Kharis to kidnap Isobel and intends to make her his brides as a Priestess of Karnak. Banning gather’s the local townsfolk (complete with torches) to hunt down and kill Bey and The Mummy and rescue Isobel.

Chaney Jr., was a welcome addition as Kharis. He was physically more imposing than Tom Tyler or Boris Karloff and that notion of the mummy running amuck is drawn from his three turns as the monster. By this time, makeup guru Jack Pierce had perfected the process of creating the creature to a fine art. He essentially created a suit that Chaney could quickly put on and remove. Having been through Pierce’s laborious makeup process for The Wolfman, Chaney was having no part of it for these films and the low budget also forced Pierce to cut corners and time.

The new location and Chaney in the starring role boosts The Mummy’s Tomb over The Mummy’s Hand by a good notch. It’s short and formulaic but it’s good fun.