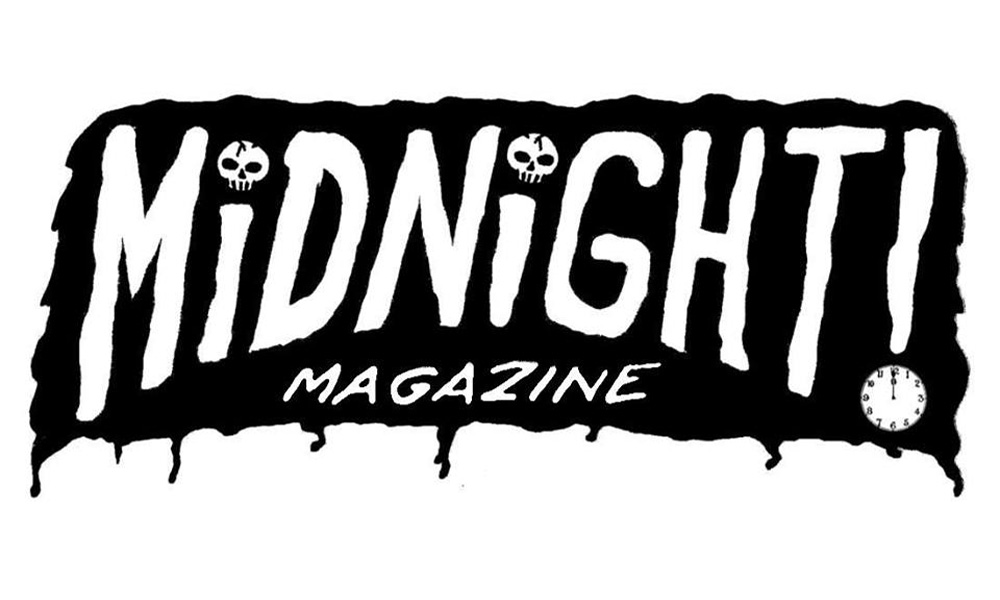 Thirty years ago I produced my own fanzine which covered independent and small press comic books. It was a great experience and introduced me to a wonderful fraternity of fellow fanzine publishers. Today that same spirit lives on as many fans have taken to the internet to produce e-zines, which are far easier and cost effective to do than traditional printed zines. Still, there is something about holding an actual magazine in your hand that you can touch and flip through the pages. One such new printed zine has just come across my desk and I am excited to bring you a look at the first issue. 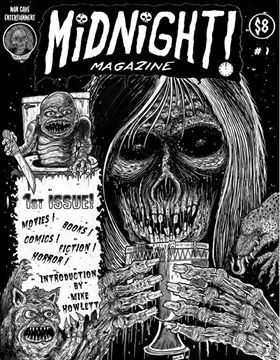 Midnight Magazine bills itself as an all-in-one horror-themed zine that covers movies, books, comics, and tops it off with a dose of fiction. The 36 page zine is black and white with heavy stock cardboard covers. Editor James Eric Wright opens the first issue with a quick overview of how Midnight Magazine sprang to life…so to speak. The first thing you notice about the magazine is that it does take a heavy fan approach to its content. These are not stuff writers going through the motions of writing an assignment they have no interest in, but rather these are passionate, hardcore fans writing about things they love.

This is perfectly illustrated in John Shatzer’s recollection of going to see “Killer Klowns from Outer Space” (a favorite of my wife’s) back in 1988. As John points out, it was a different era. You couldn’t just open your smart phone and see what the theaters in your area were showing. You had to either find those things called newspapers, or call the theater and listen to an incredibly monotone voice recording ramble on for ten minutes as they listed every show and every time on their daily schedule. I won’t spoil the hilarious payoff to John’s story but this is the type of personal fan tale that makes Midnight Magazine unique. I remember seeing this movie with my wife (who was just my girlfriend then) at a local drive-in.

Another fun piece is Mike Howlett’s book review of the 1981 horror novel “Gila” by Les Simons. What lends to the fan approach is that rather than being typeset the review is written by hand on lined notebook paper as if it was written for a class in school. What a novel approach to reviewing…umm…a novel.

Other articles include Kimberlee Jandreau’s fond look back at Charlton Comics’ “Ghost Manor” and underrated horror comic of the 60s and 70s at a time when horror was taking a distant backseat to superhero comics. There is also Rick McKinney’s review of an early 1970s low budget grindhouse film “Messiah of Evil” a film which I admit I had not heard of previously. I also enjoyed Dr. Rendevil’s look back at two horror comics froom Marvel, Supernatural Thrillers #1 and Masters of Terror #1, both of which featured the muck monster called “It”. As a huge fan of Marvel’s old black and white horror magazines this piece brought back great memories.

Midnight Magazine also features a few short prose stories. I tend to read fiction last, if at all, in magazines where both fiction and non-fiction are combined. If I am going to read fiction I generally prefer it in a full fiction publication like Weirdbook, but hey that’s just me.

Midnight Magazine was a lot of fun and reminded me a bit of the long-running Scary Monsters Magazine with its editorial approach and I can’t wait to see more.  The magazine runs $8 and you can get more information by checking out their Facebook page here: https://www.facebook.com/ManCaveEntertainment

One thought on “Review of Midnight Magazine #1”