This book is the sequel to The Lost Level. Although Brian Keene is one of my favourite authors, I had the Lost Level for ages before reading it, mainly because it’s not a horror novel. When I did finally get round to it, it blew me away. I absolutely loved it, so to say that I had high hopes for this book is an understatement. 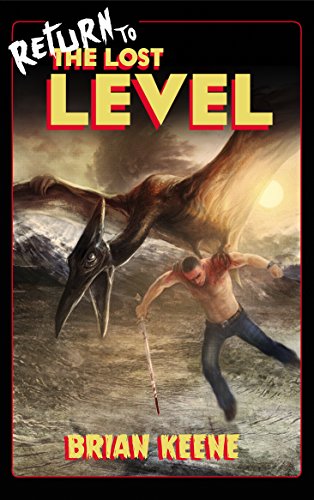 When I started reading this book, I got off to a bad start. One of my favourite characters from book one was dead. He hadn’t been killed in between the books. He had died in book one and I had completely forgotten about it, none-the-less, I was pretty devastated but I got over it and moved on. The book starts off pretty much where we left off. It’s not directly afterward but not a lot has happened and Aaron, the story teller, catches us up pretty quickly. The books in the series are supposed to have been written down by Aaron on whatever scraps of paper he comes across in the Lost Level, which are limited.

For those of you unaware with Bryan Keene’s Labyrinth mythos, he describes as an interdimensional pathway of energy, running through space and time. It touches and connects everything in the universe. The Lost Level is a dimension that’s different from all other realities and time lines. It’s where the flotsam and jetsam of space and time washes up.

You all know they type of story. A world with dinosaurs, Nazis, giant robots, tribes, snake people and so-on. Yeh, that kind of book and Keene does it really well. As I said, I tend to stick to horror but I really enjoyed something a bit different that could still bring me the types of intense moments that I normally only get from horror stories.

This book was different from the first in the fact that Keene had to introduce us to the world and the characters in the Lost Level, whereas in this book, the action and story start pretty much straight away. Aaron lives in a village with his love Kasheena, who he met in the first book. The village is attacked by the Anunnaki (snake-type people) and most of the villagers are captured and taken, while others are killed in the fight. Those that survive, go on a kind of Lord of the Rings style walk to get Kasheena and the others back. A few new characters are thrown into the mix but don’t really play a massive part in the overall story line. This one feels shorter than the first book but I could be wrong. There is a little short story that’s linked to the books that takes up the last ten percent (I read the Kindle version) of the book. The short was originally released as a chap book. It’s called the Chinese Beetle and it was okay but I’d have preferred an extra ten percent of novella to be honest.

Overall this book was a fun quick paced read and I really enjoyed it. It wasn’t as good as the first book in my opinion but close to it. I had originally thought it was going to be a trilogy but Brian tells us at the back of the book that there will be at least two more. The next book is a prequel to the Lost Level and will have links to books one and two and the fourth book will be set directly after book two. A series well worth checking out.