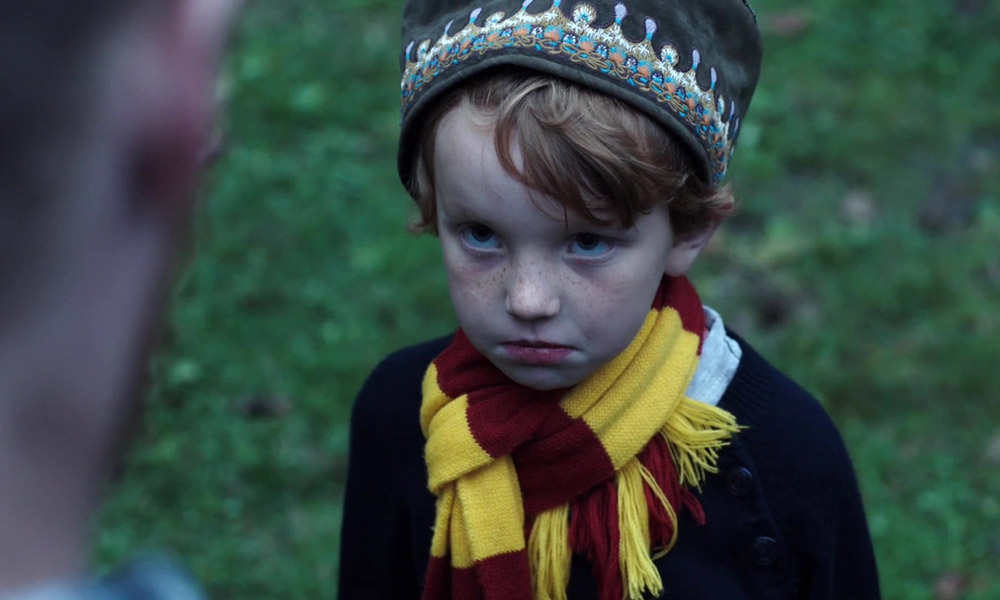 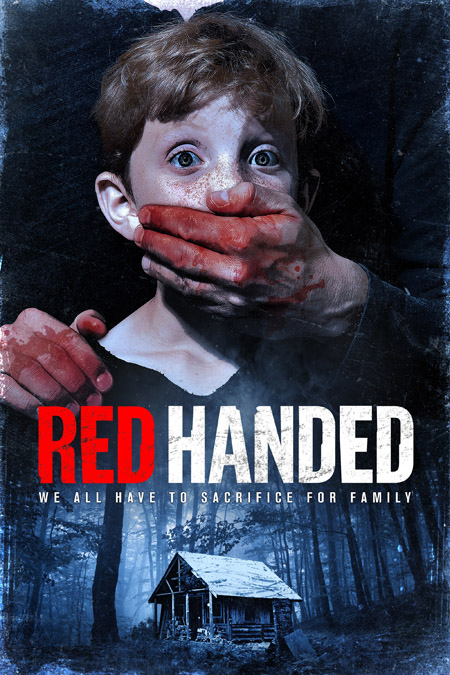 Duffy (Christian Madsen), travel to the family farm to lay his ashes to rest. Little do they suspect; their trip will be drenched in family tragedy.

Red Handed opens with a story about the Canaanite god of Moloch, whose worship demanded sacrifice of the first-born children of his followers, by way of a fiery and gruesome death. This helpful history of text plays over several pictures as we start our visual play by reading.

I admit, I have heard of Moloch, having a background in Sunday School and formal post-secondary school study in the Bible and its history and literature, yet I found this text to be hard to reading and boring. It lasts maybe a minute but starting a movie with what amounts to a lesson in ancient gods, though even a brief one, is a way to put off an audience. The textual narration is of course followed up by a vocal narration by the very soon to be dead father of the main characters. A move that is even more pointless than the textual opening, as it’s the only vocal narration we get in the movie and its forgettable nature doesn’t add anything except perhaps warn of the haphazard way this film is put together.

Early on we learn that the father Lou is estranged from his brother Reynolds (Michael Biehn) and almost estranged from two of his sons. One son (Pete) is more-or-less estranged from his other two brothers and father. The father is lured to his death by the alluring and seductive Rachael (Caroline Vreeland) in what seems to be payback for what happened to his son Pete.

The brothers come together and contact their uncle Reynolds who invites them to the family house and farm which that half of the family had not visited since a strange incident that tore the two brothers apart.

While on the family farm, we learn that one of the brothers was institutionalized at a young age and this is the reason for his estrangement from his brothers and father. While on the farm Gus’ son, I think he’s his son, goes missing. Gus and his two brothers look for the little boy.

Red Handed is a film that feels incomplete and hacked together. Some characters appear on screen and disappear as if they were just written in to give explanation to a scene. That feeling of being shoe-horned in for a quick explanation and never to be heard from again.

The actions of the characters seem inconsistent and their behaviors and don’t create either connection or have identifiable characteristics making them sympathetic to the audience.

While Gus takes Duffy’s girlfriend and his son out to meet some kids, Gus’ wife stays at home and seduces Duffy. Meanwhile Gus walks off with the beautiful Rachael to have a literal roll in the hay, leaving his kid with his brother’s girlfriend and some strange locals they met. Not a hint of subtlety or even subterfuge about what is going to happen next, we can guess and we are unimpressed.

The son goes missing and the brothers come together to look for the missing child as the rest of the cast seems to disappear. Nobody questioning them or eliciting the help of the female characters to find the child. No police are called, the brothers are just supplied guns by Pete, and they take off on a meandering search mission of mediocrity.

Look, if my non-existent child went missing, I am fairly certain I’d call the police and even more certain that even though I wouldn’t go all Bryan Mills or John Wick on the locals my child was last seen with, I would probably be kicking in some doors and giving those people excuses to call the police on me.

The movie is shot in HD with a lot of pristine pictures of the Oregon coast and countryside, which make some great scenery, but some shots are just too overused. For instance, this movie makes use of too many drone shots. Obvious lift and pan shots that offer nothing in the way of visual storytelling and though contain beautiful images are out of place and hacked into the film to possibly create a sense of dread in the viewer. Dread that the creators are padding the run time and we the viewer are going to have to sit through more of this movie.

The views of Oregon are nice and staring at the girls in this film is nice but the direction is poor, editing is poor, script is bad, though it shows some promise, but like a first draft it is in need of several re-writes and revisions, it lacks some continuity or logic. Some of the acting is okay, but a lot of it isn’t.