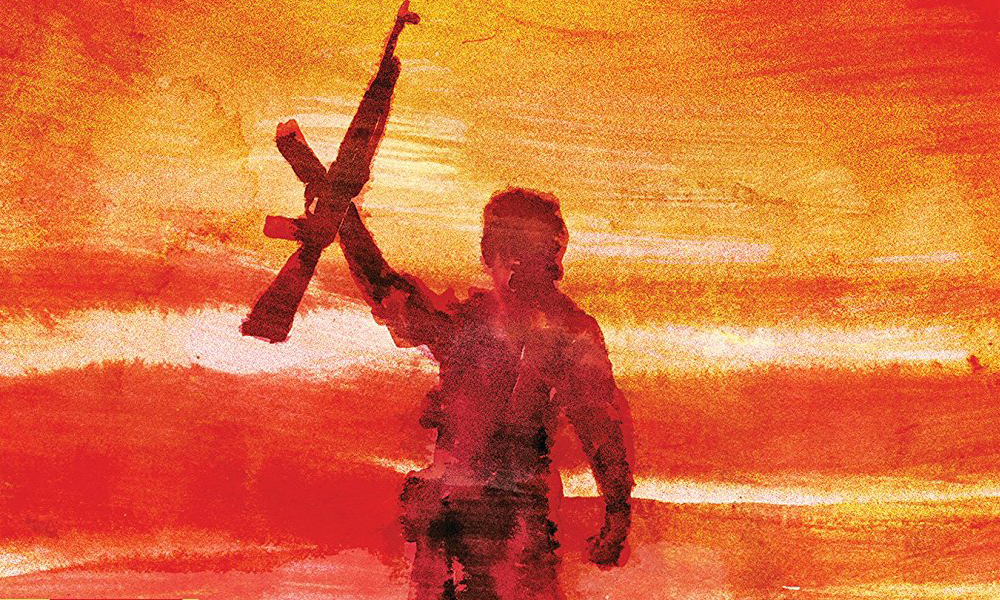 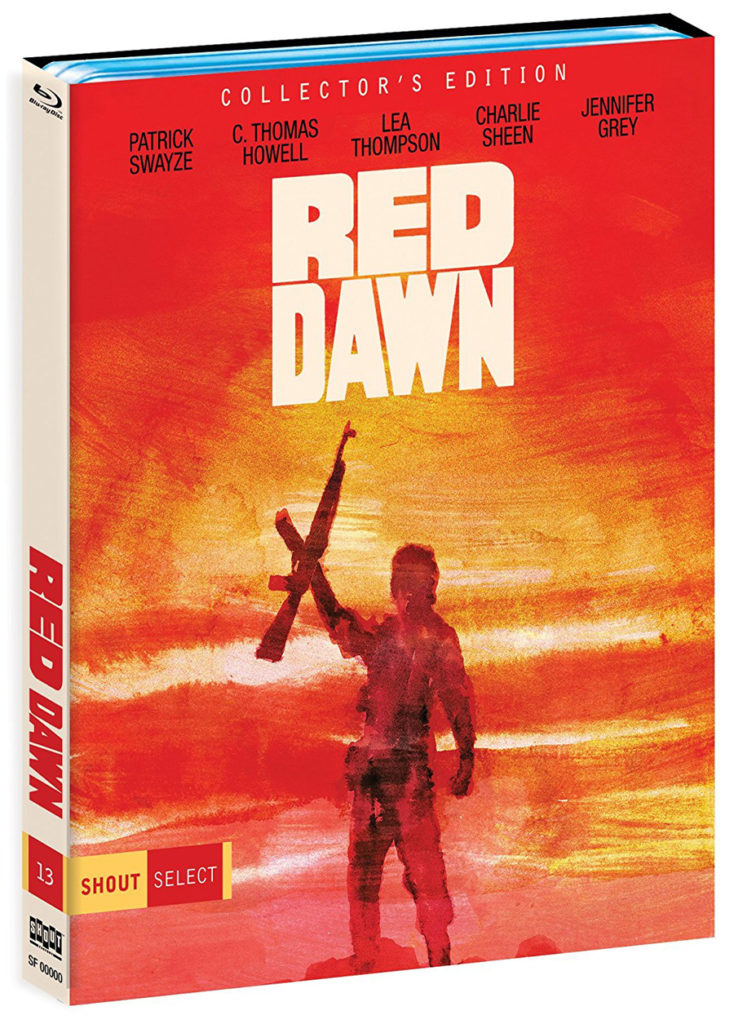 As a child of the Eighties, Red Dawn fell right into my wheelhouse. I was nine years old and the Communist threat loomed over our heads. I won’t lie to you, I played with toy guns, had surplus Army gear given to me, and loved running around playing war. So that fateful day when Red Dawn came on cable TV, it was a very realistic portrayal of what life might be like for me and my friends. I’ll go a few steps further, my name is Robert (C. Thomas Howell’s character), my best friend’s name was Matt (Charlie Sheen’s character), and I knew I could reIy on my brother if the shit really hit the fan (Patrick Swayze and Sheen’s relationship in the film).

I haven’t watched Red Dawn in quite some time. It may sound strange, but it stirs up a lot of emotions for me. Something happened to me, my friends, and even with my brother while we watched the film over and over again. We sawed off our pop guns to make sawed off shotguns, started wearing berets, and numerous white bed sheets found their way outside when the snow started to fall. In short, we believed it. We believed that it could happen and we needed to be ready. With that fantasy seeming like a reality, an emotional attachment developed for the characters of the film. When they start to fall, it hits me hard, more than I would like. When they are betrayed by one of their own, I never feel Jed’s (Swayze) hesitation, only Robert’s reaction. All those things are still there for me. Like an alternate universe where I didn’t go to school anymore, but fought for my freedom and the lives of the people around me. 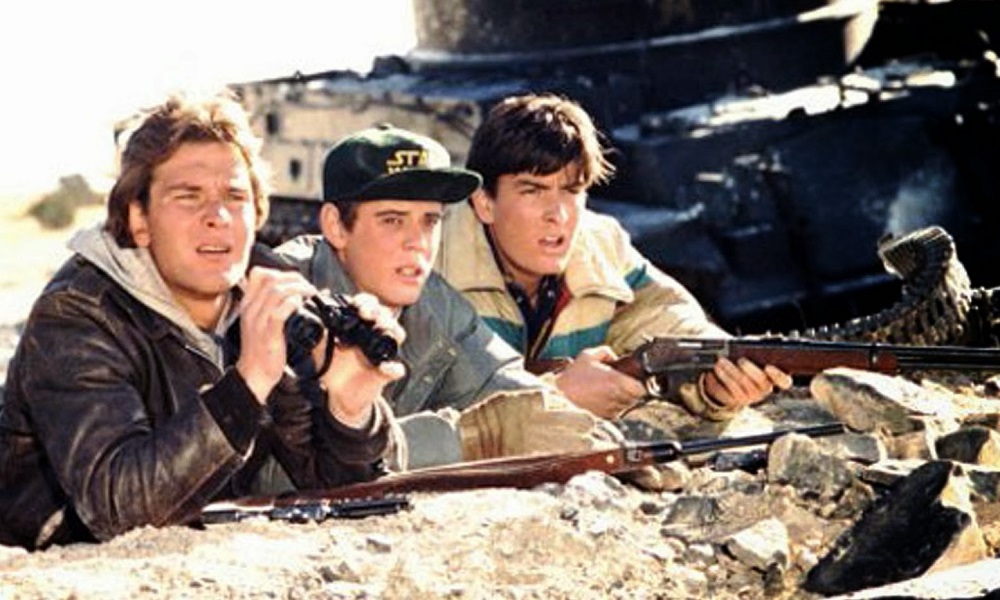 I am thirty years older now and watching Red Dawn today is only a slightly different experience. The heartache is still there, but the brilliance of the story has set itself apart now. Red Dawn may be considered a work of fantasy in hindsight, perhaps only because it never happened, but the story is about the loss of innocence. These high school students each fall from innocence in a world they did not ask for. Jed goes from gas station attendant to leader, thus reclaiming his leadership role he once had as high school quarterback. Robert goes from pure innocent to embracing the darkness as a means to cope with what has happened to him (the loss of his parents). What may be the greatest bit of storytelling lies with the film’s chief antagonist, Colonel Ernesto Bella (Ron O’Neal), who was once an insurgent himself. Bella’s loss is that he has become what he spent so many years fighting. His letter home may be one of the best humanizing moments of an antagonist ever put on screen.

In the thirty years that has passed since the film’s release, it has been one that I never picked up on VHS or DVD. Shout! Factory’s Shout Select release is a stunning transfer that, outside of the age of the principle actors, looks like it was shot yesterday. All of Ric Waite’s stunning cinematography appears as if you are looking out the window in Las Vegas, New Mexico (the film’s real world location). The setting feels even more real when you watch the concentration camp scene in this transfer. The bleak fire lights, the soft glow of the drive-in screen, and the cold steel of the chain link fence pop like they never did before. This may sound like a downer, but in contrast to Swayze’s quiet reflection looking out over the mountains before his brother interrupts, it shows the range of emotions that Waite painted with his palette.  This is a fantastic transfer and perhaps the best, thus far, in the Shout Select line. 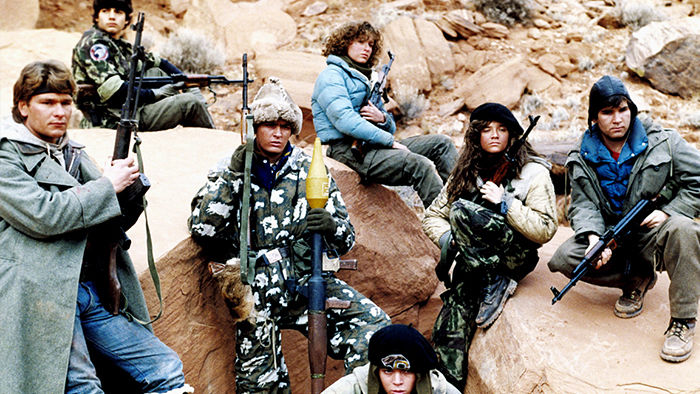 Shout! Factory compiled a new “Look Back” with a wide variety of behind-the-scenes participants. Doug Toby, who played Aardvark, is one of the on-screen actors who is present.  Now, if you wonder where the others are, the archival special features are also included from the 2007 home release of the film. There you will find Swayze, Howell, Sheen, Thompson, and director John Milius. Sadly, Jennifer Grey did not participate in either segment. Doug Toby’s stories about the production of the film and his fellow actors is a fascinating look at the whole Red Dawn experience. He speaks very well of all those involved, but it is the Wolverine’s preproduction work that what you will want to learn about.

The archival features are a great collection of stories and anecdotes about what went into the making of the film. The production crew and actors are filled with great memories about making the picture. Several residents of Las Vegas, New Mexico, who worked on or acted in the film, also chime in with their stories. The one thing they all agree on is that no matter what film comes to town now to shoot, it will never be as big or as much fun as Red Dawn. The biggest loss is that there are no deleted scenes here. After watching both the new and (now) retro look-backs, there is mention of at least two scenes that didn’t make the cut of the film. One is Thompson’s romantic involvement with Andy (Powers Boothe), which had a scene that survives in the trailer, and the other is Matt’s return to the camp after witnessing his father’s execution. I’m sure they don’t exist anymore, but what a find they would have made for this Collector’s Edition.