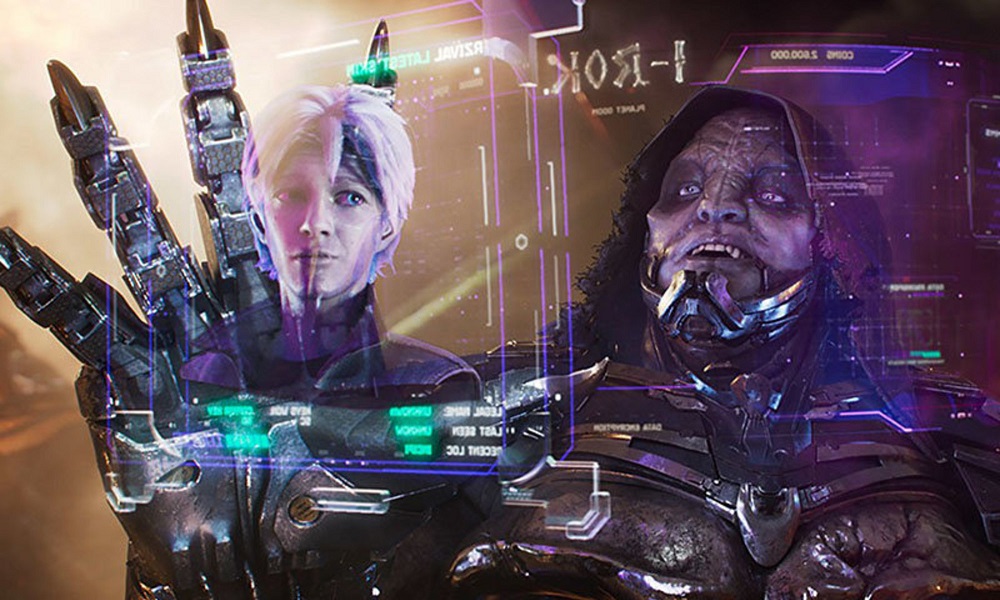 CYBERKITSCH: A REVIEW OF THE READY PLAYER ONE (2018) D.V.D. SANS SPOILERS

“We live in our fantasies and endure our realities.” — Robert Anton Wilson

Based upon Ernest Cline’s best-selling 2011 SF novel, Ready Player One takes place in a year 2045 in which a utopian virtual reality provides an escape from and a substitute for a dystopian real world of worsening economic, energy, and ecological crises.  The OASIS (Ontologically Anthropocentric Sensory Immersive Simulation) is “a whole virtual universe” in which one “can do anything, go anywhere,” and be anything “without going anywhere at all.”  It functions as both a massively multiplayer online role-playing game (MMORPG)—its original purpose—and a global virtual society with the world’s most stable currency.

So it’s used for work and play and is “the world’s most important economic resource.”  And it was created by James Halliday, an on-the-autism-spectrum video game designer who preferred the fantasy worlds of role-playing games, video games, and imaginative fiction to the real world.  (In fact, the OASIS is supersaturated with pop culture elements, especially from the 1980s.)  Before he died, Halliday hid an “Easter egg” within the OASIS and left a video to publicly announce that the first gamer to find his egg “will inherit [his] half-a-trillion dollars worth [of company stock] and total control of the OASIS.”

(“Oompa Loompa, do-ba-dee-doo, I’ve got a perfect puzzle for you.”) 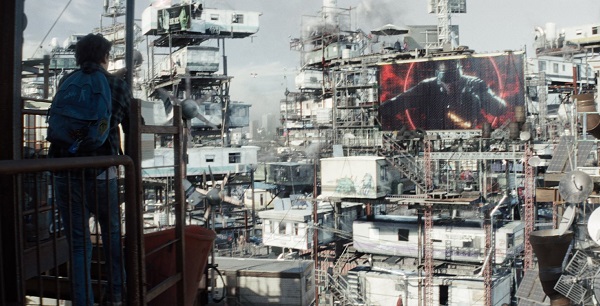 The cyberpunk subgenre of SF (science fiction) is a “combination of lowlife and high tech”; and the protagonist, 18-year-old Wade Watts, resides in a Columbus, Ohio slum in which mobile homes are stacked in scaffoldings but its denizens have access to the OASIS.  One of the generation of “Missing Millions” who live more in virtual reality than in the real world, he’s an orphan with a Stan Lee-style alliterative birth name and the OASIS avatar name of “Parzival.”  After all, Percival is one of the Arthurian knights who finds the Holy Grail, and Wade has dedicated his life to finding James Halliday’s Easter egg.

Also dedicated to winning Halliday’s contest is “corporate asshole” Nolan Sorrento, the CEO of IOI (Innovative Online Industries).  IOI, which manufactures virtual reality equipment for accessing the OASIS and has an indentured servitude program for those who fail to pay their debts, is “the second-largest company in the world [behind Halliday’s company], with designs on becoming the first.”  Sorrento is willing to do anything, including ordering and committing murder in the real world, to win the “war for control of the future.”  Thus Wade’s quest leads him to join (eye roll, please) “the rebellion” against IOI. 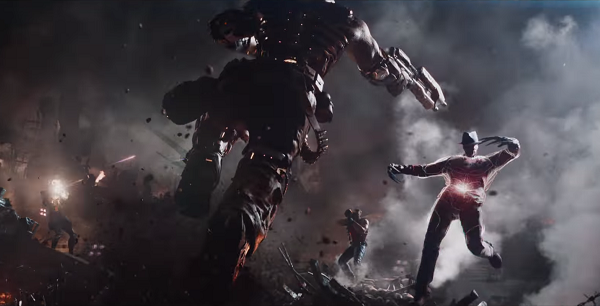 So, like good SF should, Ready Player One imagines the human consequences of an imaginary technology (the OASIS) and is a caricature of and extrapolation from the modern world.  (It deals in current concerns about the economy, the environment, and the Web, especially social media like Facebook.)  But it missed the obvious opportunity to brilliantly satirize this world.  And it answers cyberpunk’s philosophical questions, “What is real?” and “What does it mean to be human?,” with syrupy, simplistic messages that “reality is the only thing that’s real” and about “connecting with someone, connecting with the world.”

Ironically for a cautionary tale about escaping and neglecting the real world for fantasy ones, Ready Player One doesn’t have much of an emotional core, either.  Tye Sheridan’s hapless nerd Wade Watts isn’t as likeable and sympathetic as Tobey Maguire’s hapless nerd Peter Parker in the original Spider-Man (2002), and his interactions with the other “High Five” rebels—even his best/only friend Aech and the girl he loves, Art3mis—feel rather flat.  His internal journey of learning to connect with the real world and its people, a journey his idol James Halliday regretted not undertaking, just doesn’t feel genuine.

And the story of his external quest, despite having all the elements of Joseph Campbell’s “hero’s journey” monomyth, has no feeling of mythic weight as do the “Star Wars” and “Matrix” movies.  Instead, it’s as light and fluffy and sickly-sweet as cotton candy.  (In like manner, its Category 5 hurricane of CGI effects creates the same feelings of sensory overload and nausea that eating far too much candy in one sitting does.)  And this is really a shame, because with its premise, budget, and director, Ready Player One had the potential to be one of the greatest SF movies of all time.  Instead, it’s a mediocre one.

D.V.D. EXTRAS:
⦁ “The ’80s: You’re the Inspiration” (5:38):  In this featurette, Ready Player One’s director/producer Steven Spielberg, author/co-screenwriter Ernest Cline, co-screenwriter Zak Penn, and actors Ben Mendelsohn, Simon Pegg, and T.J. Miller reminisce about 1980s pop culture, to which Spielberg contributed greatly.  In fact, Spielberg declared “I can’t celebrate myself!” and kept references to his own movies—the ones he just produced as well as the ones he actually directed—to a minimum.  (But that was detrimental as well as unnecessary because audiences don’t associate him with the movies he produced but didn’t direct, e.g., Gremlins (1984), Back to the Future (1985), and The Goonies (1985).)
⦁ “Game Changer: Cracking the Code” (57:19):  This featurette is the longest and covers several topics.  It covers Ernest Cline’s novel (inspired by “the Atari game Adventure, which was the very first video game to have an ‘Easter egg’ in it” and “Roald Dahl’s … Willy Wonka books”) and his and Zak Penn’s screenplay (which is “respectful of the material”—too respectful, actually).  It covers the casting for the movie, something Steven Spielberg believes “takes intuition and instinct.”  It covers the visual design, which was of “two different looks for two different worlds”: the virtual one of the OASIS and the real one of 2045 Columbus, Ohio.  And it covers the “two very distinctive phases of production”: the more than half of the film that “takes place in the OASIS,” which was shot first “in a motion capture studio,” and the less than half of the film that “takes place in the real world,” which was shot next.
⦁ “Effects for a Brave New World” (24:38):  And this featurette, the second longest, is about Ready Player One’s visual effects.  Digital Domain “did all the live-action real-world content,” and Industrial Light & Magic did all “the OASIS content.”  ILM had to create “a virtual world [that couldn’t] look like a cartoon world [and had to] be almost as realistic as the real world with just enough of a difference that the audience knows when [it’s] a digital universe.”  As with everything in the fictional OASIS, every “character, prop, vehicle, environment” in the movie was created virtually.  And like an OASIS user, director Steven Spielberg entered that virtual reality, where his avatar used a virtual video recorder to “do actual shots [and frame grabs] walking through the virtual set.”  A movie about VR made using VR …
⦁ “Level Up: Sound for the Future” (8:02):  This featurette is about Ready Player One’s sound design.  Steven Spielberg wanted to make the movie “not just a visual banquet but also an [auditory] one … to give the maximum immersive experience to an audience.”  And as with the visual effects, the sound effects had to be not quite realistic, appropriate for “a world in which anything can happen.”
⦁ “High Score: Endgame” (10:04):  In this featurette, Steven Spielberg explains that because he “really needed” John Williams, who’s scored “the vast majority of [his] movies,” “to do The Post,” he was “unavailable to do Ready Player One.”  So he had to use instead “the only composer [he] knew aside from John [who] could pull off a stunt like Ready Player One”: Alan Silvestri.  And Silvestri “had a small window of availability, just enough that he could do [the] film.”  “There was a little bit of a mutual fanboy thing going on” when Silvestri met Ready Player One author Ernest Cline, and Cline “felt like [his] heart was gonna just fly out of [his] chest” having Spielberg direct a movie based upon his book.  Gee …
⦁ “Ernie & Tye’s Excellent Adventure” (12:00):  And in this featurette, Ready Player One’s author Ernest Cline and star Tye Sheridan (who plays Wade Watts) totally geek out at Cline’s home in Austin, Texas.  They geek out about “the movie tie-in edition” of the novel becoming “number one on the New York Times bestseller list.”  They geek out over Cline’s Delorean, modified to resemble the one in Back to the Future.  They geek out about how Cline’s life changed over the course of 48 hours back in 2010 because “the bidding war over the book rights in the publishing world [led] the very next day [to] a bidding war over the film rights.”  And they geek out about how Steven Spielberg was the one to direct it.