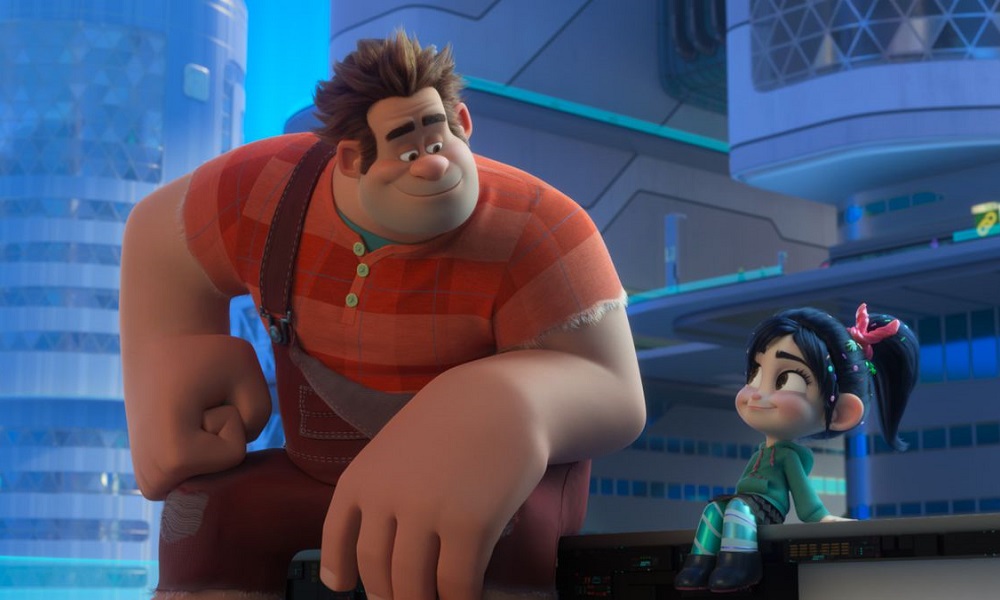 The original Wreck-It Ralph is one of my favorite animated films of recent years, which always makes the prospect of a sequel a little daunting. Certainly, there’s strong appeal to returning to the world of Ralph (voiced by John C. Reilly) and his friend Vanellope (voiced by Sarah Silverman): pixelated characters who jump between the various arcade games in the fun center they call home. But can the filmmakers justify the exercise with a strong story, or will they content themselves with a victory lap that simply rehashes the first movie?

Ralph Breaks the Internet falls somewhere in between: clever and funny, but also a trifle wandering. It can’t meet the standard set by its predecessor, but it makes a game effort, and in the process comes up with some fun new concepts of its own. It expands on the original idea of taking Ralph – a villain in his game who breaks things with his mighty fists – into an unfamiliar environment and letting him crash around in it. In this case, he and Vanellope venture online when Vanellope’s game breaks down: they need a rare part to fix it, or else Vanellope and all of her Sugar Rush buddies will be left homeless.

The film’s most potent achievement entails its vision of the Internet. Traveling through the WiFi signal brings Ralph and Vanellope to a giant gleaming city, with different buildings representing different websites. The biggest represent popular pages like YouTube and Facebook, while smaller ones cut a less prominent profile. The bowels of the city contain the rubble of discarded sites like MySpace, as well as the criminal dark web which looks sketchy indeed. Human surfers appear as little square-headed avatars moving perkily from place to place.

It’s a heady concept and there’s plenty of fun to be had just watching our heroes bungle their way through their new surroundings. Ralph’s propensity for inadvertent damage makes for some fine physical comedy, and the writers give Vanellope a restlessness that moves her into some interesting places (specifically an online game of the Grand Theft Auto mode.)

The filmmakers gird the basics with more subtle commentary as well. Some of it involves the Internet’s uglier traits: the concept of trolling hits Ralph like a brick, as does the empty rush of online fame. But the best elements touch on something more universal. Ralph feels threatened by Vanellope’s new interests, and has to learn how to let his friend grow… even if it means growing apart from him. That gives the story some weight and keeps the lighter concepts from simply floating away.

That’s a bigger danger than it appears. The film struggles for focus sometimes and the storylines often get lost in a wandering structure that makes it feel more like a sketch piece than a genuine plot. Certain concepts are left woefully underused, while others (like the much ballyhooed Disney princess hangout) begin brilliantly but fall increasingly flat as the film returns to them more times than it should. The Internet encourages such a wandering attention span, of course, which adds a certain irony to the film’s ADHD, but capitalizing on the notion may be expecting too much from any picture.

Of course, none of it’s fatal to the movie, and while it takes its time getting to where it wants to go, it certainly delivers a lot of entertainment in the process. Reilly and Silverman have a great deal of affection for these characters, and their enthusiasm at returning to them shines through in every seen. Directors Phil Johnson and Rich Moore don’t always strike home with their notions, but they diligently milk the most out of them, and while the ideas are sometimes unfocused, they often become quite funny. They also don’t get too precious with the characters, leaving earlier figures on the sidelines in favor of new personalities with a little more juice. (Gal Gadot’s car thief queen is a scene-stealer.)

That’s enough to make Ralph Breaks the Internet agreeable Thanksgiving fun: an expansion on the character that might not have been necessary, but certainly feels worthwhile. It flirts with the greatness of its predecessor fitfully at times, but the spirit lingers, and with a few funny jokes and the gorgeous visuals, it makes the shortcomings all the easier to forgive.