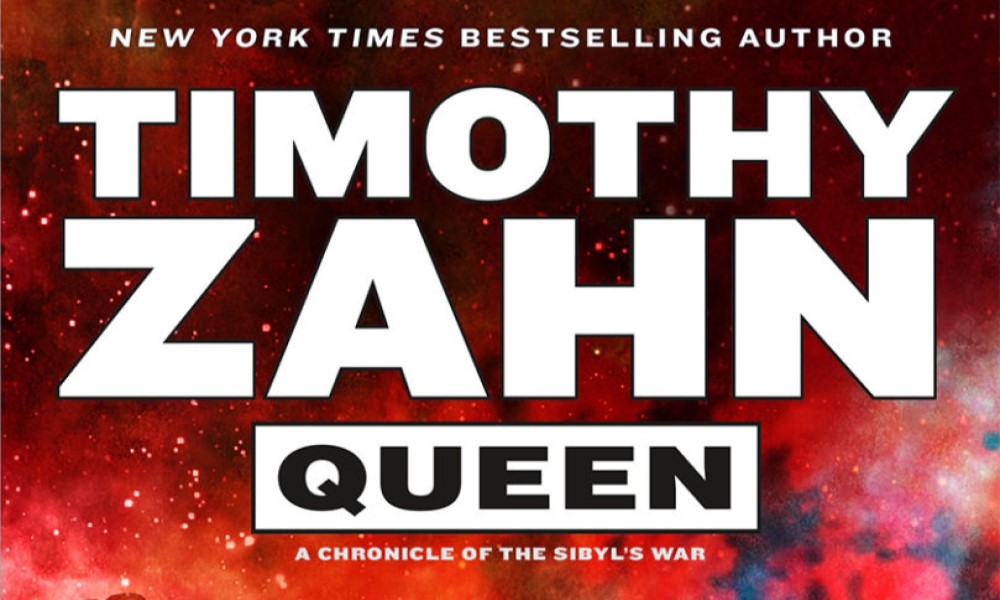 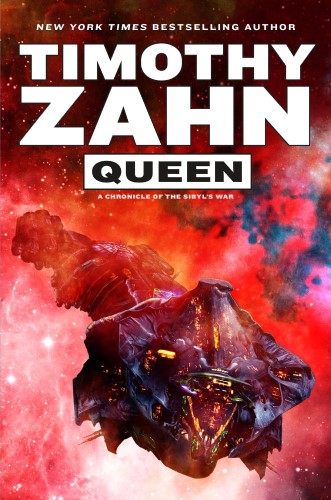 Let me start off by saying that I know Timothy Zahn—pretty well. When I was running the STAR WARS: MEN BEHIND THE MASKS promo, he was doing his STAR WARS BOOKS. Our timing at shows was similar so he often had his dinner with me, my wife, and whatever Star Wars guests were with us.

In any case, QUEEN; A CHRONICLE OF THE SYBIL’S WAR is a pretty typical Timothy Zahn book—albeit the third in the series (probably the last, the way the book reads). It’s a good—no, very good book. Written in Tim’s usual style which means the story moves along quickly and without internal complications.

The story concerns Nicole—a girl of the Philadelphia streets who has been transported to a space ship (the FYRANTHA) and who, in the previous two books, has become the ‘Protector’ of the ship.

She’s not quite sure of that.

The ‘Shipmasters’ seized the ship sometime earlier—and need humans to do repairs, upgrades, and other quite normal—and quite abnormal—work. It seems that only humans are capable of such things so the ‘Shipmasters’ have been pulling humans via teleport for some time—but when they grabbed Nicole, they got a bit more than they expected. Her skills have allowed her to beat the Shipmasters at their own game—and she has taken control of part of the ship, including all instruments and their ‘Wisps’, mothlike creatures who are able to carry humans and other aliens across the various heat sinks that are all over the ship.

The ‘Shipmasters’, meanwhile, have grabbed some of the Koffern, a warrior race from another part of the galaxy and are using them to hunt down Nicole and her people.

The Koffern are large and mean—and at least a match for the humans barehanded—but they had weapons given them by the ‘Shipmasters’. Weapons safe for use in the ship and more than able to take a human sown and make him a prisoner.

The Koffern are Nicole’s first problem. She has to find a way to get them out of the way so she can do what the ship wants and free it to its own control and purposes. To make matters more difficult, the ‘Shipmasters’ have realized just how good the humans are in war (through public battles in one of their ‘arenas’). This means that they will find a customer to whom they can sell all the inhabitants of Earth for use in various wars and battles.

All they need is control—and time.

Nicole plans to give them neither. She plans a way to take the Koffern down using the ships own mechanisms—and succeeds! The Koffern, and most of the shipmasters, end up imprisoned!

Now she has to find a way to fix the ship—and quickly, before the Koffern’s people, called by those on the ship turn up to take over.

Can she do this? Well, without spilling too much, this is the third (and apparently final) book in the series—one would normally assume that Nicole would triumph and the ship would regain control of itself.

But this is Timothy Zahn, a man who has a history of doing things a little differently. So, one has to wonder, will Nicole pull it off? Or will something happen to foil her.

There’s really only one way to find out—QUEEN A CHRONICLE OF THE SYBIL’S WAR comes out this month—give it a read and find out how it really ends or, even more dramatically, read all three books in this series and know the full story of the ‘SYBIL’S WAR’.

Whatever you do, you’ll find that you’ve had a good read from a great writer!