Priest of Bones by Peter McLean, published by Ace, is the first book in a series called War for the Rose Throne. I have no idea what the Rose Throne is, but perhaps that will be revealed in the second book? I’m pretty sure it’s intended to be a series. The ending suggests there’s more to tell – and, as I said, the Rose Throne was never mentioned. 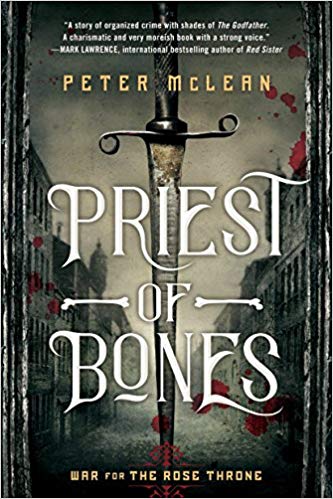 Tomas Piety is the narrator, and he used to rule the streets of Ellinburg (the part known as the Stink), until he was conscripted into the war. Now that the fighting is done, he’s returned home with his crew of loyal soldiers, ready to return to business as normal. However, in his absence, the Stink and its businesses have been secretly taken over by foreigners known as the Skanians. That’s the set-up, and the rest of the novel involves Piety and his Pious Men fighting to regain control over their old stomping ground whilst leaving an impressive body count in their wake.

Overall, I thought Priest of Bones was a decent enough grimdark fantasy novel. Definitely, if you love mobster/mafia type of murdering, intimidation, and battles over businesses, this would be right up your alley. Instead of tommy guns, McLean gives us swords and axes; instead of petty criminals, we have soldiers returned from war; instead of hitmen, we have assassins called Queen’s Men. Hey, there’s even a wedding, and the governor of Ellinburg is referred to as the Godfather. What more could a mafia-loving reader want in a fantasy novel?

Well, me, not being a mafia-loving reader, wished for more. Throughout the novel, “the war” that Piety returned from is referred to only vaguely. I have no idea who the enemy was, how long they were gone, or what the war was over – territory, resources? Were they the invaders? Were they the defenders? Normally, I wouldn’t feel the need to know such details, but McLean mentions the war quite a lot. The soldiers are shell-shocked and dealing with PTSD, haunted by a certain battle known as Abingon. This war-time trauma and the traumatic childhoods of Tomas and his brother, Jochan, are the most interesting bits of the book, but their childhood backstory doesn’t come into play until the last quarter of the novel, and virtually nothing is learned about the war that haunts them. I felt this was a massively missed opportunity to elevate Priest of Bones into something that could cross-over into mainstream markets.