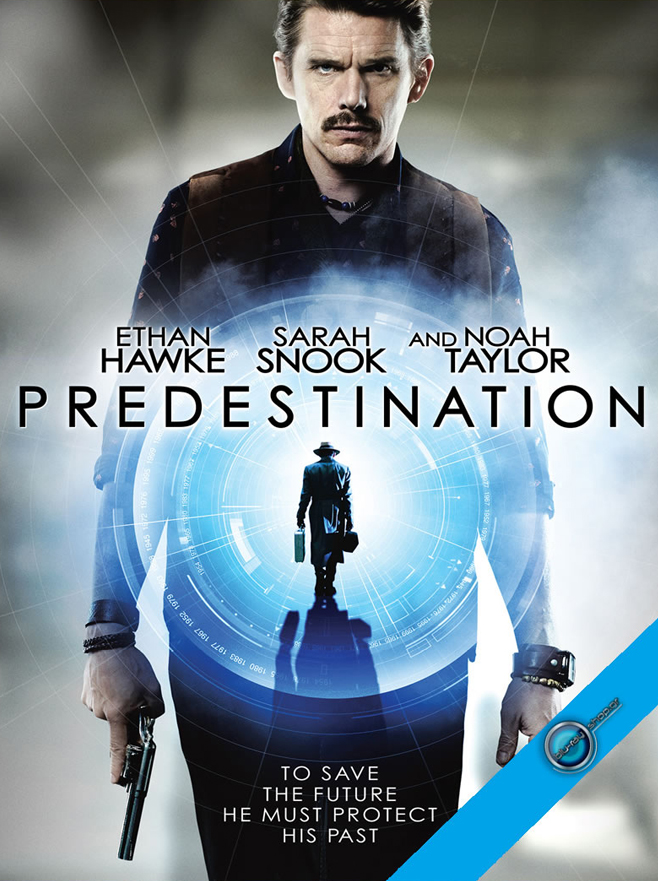 Whenever one writes a review, it is tradition to give the reader a run down of the film’s plot. The Spierig Brothers’ Predestination makes that insanely difficult, because it spoils the hell out of the movie, a fact that is further illustrated in the special features were the cast also tries to describe what the film is about. I found two synopsis’ on the film and one spoiled the it completely. So here is the “safe one”, Predestination is: “The life of a time-traveling Temporal Agent. On his final assignment, he must pursue the one criminal that has eluded him throughout time” (IMDB).

The film is actually based on a short story by Robert A. Heinlein called “All You Zombies”. No, this is not another story set in the zombie genre. In fact, it is a term the narrator uses to describe the regular people in the world. Much like that of Tom Hiddleston’s vampire in Only Lovers Left Alive (2013). Ethan Hawke plays an a Temporal Agent on the hunt for the “Fizzle Bomber”, an individual who will wreck havoc through New York City in 1975. Hawke is now in that present and  undercover as a Bartender, who starts up a conversation with a lonely fellow.

Where Predestination takes you is not anywhere you expect to go. No more than ten minutes into this conversation between the Bartender and this fellow, your head starts scratching. What does this have to do with the movie? Is this guy the “Fizzle Bomber”? I am getting ahead of myself. In the beginning of the film, we see Hawke’s character try and stop the “Fizzle Bomber”. He fails, only to be left horribly burned. Since this a time travel movie, we bounce all over the place in the story, but the events play out as The Spierig Brothers want us to see them; giving us our final destination.

The film is highly stylized and captures the look of each decade Hawke travels into. In fact, the story, with its twists and turns, might actually make you loose sight of how perfect the production design of this film is. Sci-Fi enthusiasts will absolutely love the “Space Corp” scenes. Sarah Snook is another great surprise. Her journey is another gem in this story and her performance of the “Unmarried Mother” should have made more critics top 10 lists. She is a face that, hopefully, we will be seeing more of.

Time travel movies are an incredible sub genre of Science Fiction. Each and every time someone turns out a new one, we rush to see their vision of what time travel is like. The Spierig Brothers take Robert A. Heinlein’s short story and craft a heartbreaking tale of time travel that will leave you in awe. Many will argue the time paradox problems until they are blue in the face. If you do that, you are missing the point. A film like Predestination is the reason why we love movies.

A Journey Through Time Featurette

Ten-Part Documentary: “All You Zombies: Bringing Predestination to Life”

Where Predestination takes you is not anywhere you expect to go. No more than ten minutes into this conversation between the Bartender and this fellow, your head starts scratching. What does this have to do with the movie?

Where Predestination takes you is not anywhere you expect to go. No more than ten minutes into this conversation between the Bartender and this fellow, your head starts scratching. What does this have to do with the movie?