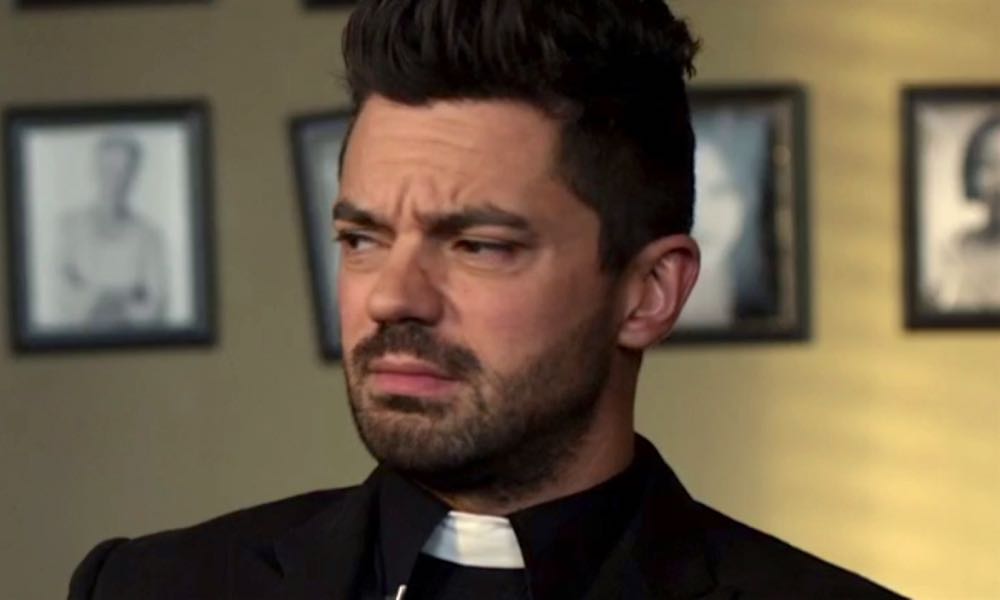 Preacher picked up this week right where last week’s episode left off. Viktor’s men are taking Tulip captive as Jesse continues his search of New Orleans bars for God, and Cassidy continues to lounge at Dennis’ place. This week’s episode slowed the pace a little for the most part, saving the action for the end. Viktor continued to develop the story on two fronts; Eugene’s adventures in Hell and the gang back here on Earth just like last week’s show, and like that show, it had some surprises in store.

Hell is not a pleasant place and this week’s episode provided a better glimpse of the show’s vision of Hell. It’s depicted to be a lot like being in prison is portrayed on TV. In fact, it’s just like it. Something goes on the fritz, and all of Hell’s inmates spill out into the endless corridor outside their cells as their doors open. They all seem to have a pretty friendly rapport, and it doesn’t seem that unpleasant outside of them all being prisoners and it is Hell.

There’s a bully who starts picking on Hitler and Eugene speaks up in his defense drawing the bully’s attention to him. Eugene is subjected to ridicule for his appearance and right when it starts to look like things are going to get worse; a buzzer sounds signaling it’s time to return to their cells. Eugene finds himself locked out his room and Hitler offers to let him hang out in his. He knows who Hitler is and the horrible things he has done and when he confronts him with the knowledge Hitler offers not an argument and quietly admits his guilt without emotion.

Eugene gets to see what Hitler’s worse memory is and oddly it turns out to be a pleasant afternoon in a fancy little cafe in Munich. While Eugene goes unnoticed by anyone, A woman joins Hitler and encourages him to share his artwork with the owner of a gallery seated nearby, but Hitler declines to say his work is not ready yet. Suddenly the vision of the place evaporates Leaving Eugene puzzled by the innocuous nature of the scene he has just witnessed.

Eugene returns to his cell only to find out the problem is still not fixed and the large woman we met last week which seems to be in charge has him follow her to an office. In her office, Flanking her is a foreboding monster of a man who stands silently by her side. He only moves when she makes a point by showing Eugene things could be worse by showing him “the hole” which is a hole in the floor of her office. The hole, she warns, is where she puts inmates that displease her. She warns him being a nice, caring person is not acceptable behavior in Hell.

She sends Eugene to a prison lounge where he rejoins Hitler and the others. Apparently, they all get to hang out in this room while the problem is repaired. The bully is there, and he starts in on Eugene again, and this time it’s Hitler who intercedes on his behalf. I suspected Hitler might have some unique ability in Hell and that is why he was brave enough to stand up to the bully, but that was not the case. The bully punched him in the face knocking him down, and he and the other prisoners start kicking Hitler while he is on the floor while chanting Sieg Heil! Eugene speaks up it seems to stop the beating, but instead, apparently taking the warning not to be a kind person seriously, he joins the others in mistreating his new acquaintance.

Meanwhile back on earth, we find Tulip arriving at an impressively large mansion, the home of Viktor (Paul Ben-Victor). This is Tulip like we have never seen her, she seems genuinely scared. We have been led to think this mysterious man is someone she wronged in such a serious manner it could cost her her life.

Viktor confronts her, and she apologizes but that he says is not enough. He gives her time to wander the house while she thinks of a better way to explain herself, She knows the place and the people. They are distant towards her and aloof. She finally gives in to being Tulip meaning she turns to being impulsive and violent, She gets a gun and finding Viktor she threatens to kill him if he doesn’t let her go. His men tackle and disarm her moments later.

Jesse finally shows up at Dennis’ and Cassidy tries to tell him that Tulip is missing, but Jesse is convinced she is just being Tulip and has gone missing because they’re in a fight. He takes a nap and prepares to go out in search of God again when Cassidy spots the man who appeared in the vision of God back in the church appearing in a commercial on TV. They put two and two together and track him down to a local talent agent who is deaf to anything he doesn’t want to hear. Pretending interest in hiring the fellow, they finally get the agent to admit he doesn’t know where the faux-God is, but they find out he does have an audition tape which he gives them and when they watch it shows the actor was killed right after the audition. He was shot right there on the spot immediately after they agreed to hire him for the part. Jesse remarks they had to kill him to get him to heaven.

Right after that Cassidy brings up Tulip again and Jesse finally realizes she might be in trouble. He tracks down the location of Viktor’s house and using Genesis on everyone he encounters he begins searching the house for her. He meets Viktor’s torture guy who wears ear buds all the time and so Genesis doesn’t work on him. They have a  knock down drag out fight.  This guy is really tough, but eventually, Jesse gets the best of him impaling him on a long metal shaft.

Jesse rushes to rescue Tulip who he finds sitting on a bed with Viktor chatting. The preacher is so fired up he doesn’t consider the situation might not be what he thinks, so he hits Viktor and begins choking him. Tulip yells for him to stop but he continues until she tells him Viktor is her husband. Tulip’s big secret is finally revealed for what it is.

This last scene is followed by a shot of the Saint of Killers as he arrives in New Orleans. He is shown crossing a bridge that leads into town. So much for things going at a mellower pace.

It was not as memorable an episode as the last few. The show couldn’t be expected to continue at the action packed race season two has been going at since it began. It still portrayed a good mix of the dark humor and surreal events this series has become known for, and although it was measurably mellower it still had some important events and developments that added to the series narrative in an enjoyable and entertaining manner.