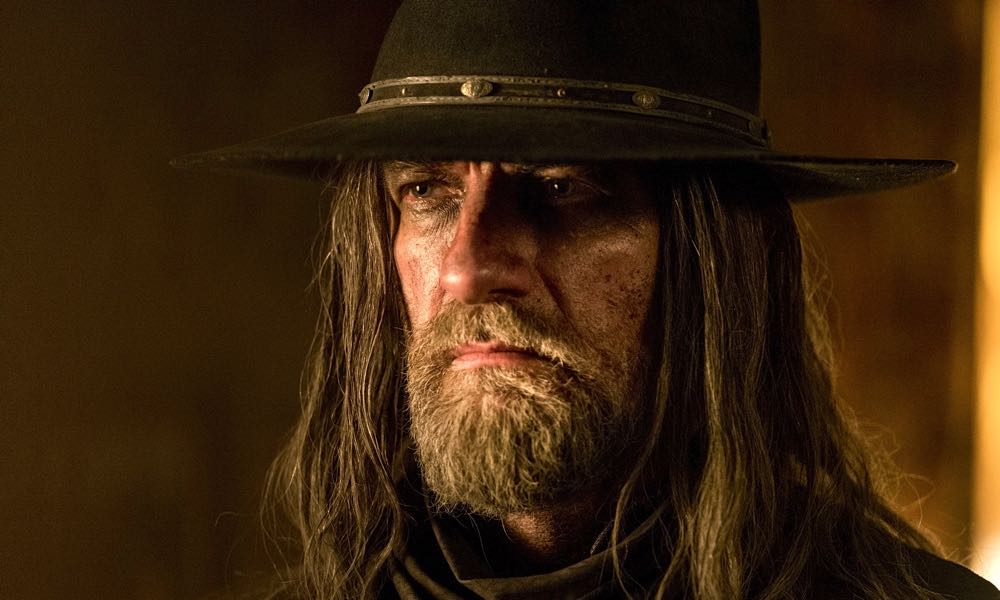 We finally get the moment we have waited for when the Saint Of Killers catches up with the gang.

Sokosha had an interesting way of dealing with exposition; we learn more about the Saint Of Killers by way of a unique and amusing method. It was part of another strong episode that reminded me a lot of what happens when Bugs Bunny has one of his classic situations involving Yosemite Sam. You know Bugs will win, you just don’t know how he will do it.

This time around the show had its usual trademark mix of ultra-violence and dark humor along with a unique concept that contributed to making it a somewhat more than usual tongue-in-cheek episode. There’s more than one revelation this time around, each contributing in its way to help round the story out.

Sokosha starts out with a curious preface that requires a little figuring out of what exactly is going on. An Asian man, (who it turns out is Japanese)is visiting an older couple and spouting a stream of legalese about a contract they are about to sign representing an agreement between them. He then attaches a technological device with a digital readout to the older man. It doesn’t appear to be an invasive procedure, but he’s extracting something none the less. Afterward, he hands the man a check in exchange for what he has acquired.

THe man with the device exits the home and waiting for him outside is an armored truck and two men. He enters the truck’s back door, and they proceed to lock him inside.

We join Jesse, Tulip, and Cassidy where we find Tulip making pancakes. It’s already been established that Tulip has an interesting approach to the culinary arts and this time is no exception. Her pancakes are embellished with various candies, and when she sits down to eat, she nearly empties an entire can of whipped cream onto hers. I finally figured out Tulip’s approach to cooking is the same as what would happen if you had a five-year-old create the menu.

Meanwhile, across town the daughter of Viktor is still pleading for her life and telling the Saint Of Killers she knows where to find Jesse and friends. He agrees to follow her instructions so he can carry out his single minded purpose for existing. She takes him to Dennis’ apartment building but intentionally shows him the wrong apartment. He kicks in the doors of several rooms before he finds the right one, allowing the gang time to escape before he arrives.

The Saint is no joke. As we have seen before, he’s super scary, deadly, super strong, and nearly impervious to injury. He’s an evil gun-toting Superman, kind of like Lobo.

Following Jesse’s lead, they adjourn to the local library to find out more about their pursuer, in hopes of figuring a way out of the situation. Jesse is smart enough to know they can’t just keep running. Things come to a head when Cassidy remembers he has to warn Dennis not to go home. We finally get an explanation of Cassidy’s relationship with Dennis. Dennis is his son. Dennis walks into an ambush; he finds the Saint waiting for him when he gets home. Dennis, it turns out is pretty gravely ill.

The Saint having Dennis as a captive forces Jesse’s hand. He goes to meet the Saint face-to-face and make a deal. Jessie’s armed with knowing more about the killer from what he learned at the library. So do we by way of audio tapes and Viewmaster slides being used by Cassidy and Tulip during their library visit. Jesse knows what the Saint wants, and they make a deal. The saint requires a soul so he can gain entry into heaven and reunite with his family. Jesse explains the whole God missing situation but thinks he can still help him  Jese has an hour to find a soul for the Saint while the Killer holds Cassidy Tulip and Dennis as collateral.

As soon as he leaves, Jesse makes a bee-line for the nearest voodoo shop and asks to buy a soul. He’s told about Soul Happy Go Go and how Japanese have cornered the market with a high tech approach where they purchase small, precise amounts of people’s souls. This explains what we witnessed at the beginning of the episode. Jesse finds the armored truck and gains entry only to find there’s a hitch involved; the souls have to be compatible. As luck (and the show’s creators) would have it the only compatible soul they can find is Jesse’s.

Jesse has one percent of his soul extracted to give the Saint and arrive just in time to prevent Tulip from meeting a grisly doom. It works, and the Saint seems to have a moment of feeling something he hasn’t felt in a long time. Jesse gives him the hard truth after that. There’s no chance in hell he’s going to get into heaven, and the Saint responds by requesting to be sent back to hell.

The thing is having a soul makes the Saint vulnerable to  Genesis, and Jesse has a different solution. He puts the Saint into the back of the armored truck, drives deep into the swamp and sinks the truck in it. Problem solved, at least for now. As I said, Yosemite Sam never had a chance.