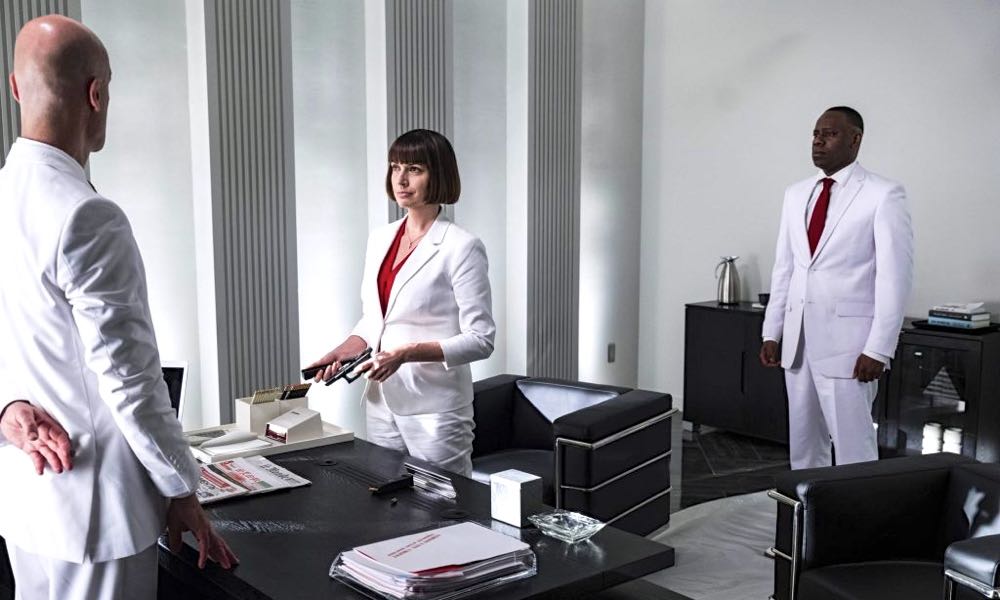 The visit to New Orleans is starting to drag on and is having an unpleasant effect on the three visitors.

Another episode that left me with the impression I had just experienced a pedestrian effort from the show. It wasn’t that nothing occurred, it did, but the series doesn’t seem capable of generating the same degree of energy and excitement that started out its second season. There’s no visit to hell this time around, this week’s story divided its time between Jesse, Tulip, Cassidy, Dennis and the people that seem to be most interested in them, Her Starr and the Grail. That said, even a slightly mediocre episode of this show is still better than what other series can muster.

Jesse is still searching for God, but at this point, his efforts are now watching Youtube postings of people that are seeing images of God burned into their toast and whatnot. Tulip is in a downward spiral, spending too much time at the KIll Zone and avoiding sleep because she keeps dreaming about the Saint of Killers. Jesse is finally forced to use the Word on Tulip to force her to get some rest. We learn Cassidy blinked first in the battle of wills with Dennis and gave in to his desire to be bitten. So now Dennis is not sick, He’s acting perky an more lively that he has ever behaved before. Now he’s an old vampire that needs to be taught the ropes by his father, Cassidy.

We witness a conference between Herr Starr and the two agents (Julie Ann Emery, Malcolm Barrett) that have been spying on Jesse and his friends from down the hall. They are shown watching video from a camera that somehow managed to plant in Dennis’ apartment. Starr is not impressed by their findings, in fact, he’s bored. He orders Jesse and the others killed. An assault team prepares, and they attack Dennis’ place at night all decked out in high tech gear that allows them to see at night and helmets that block their hearing because of Jesse’s powers.

The attack doesn’t go well. The assault team sneaks in and assumes the planned sneak attack gives the Grail the upper hand. The attackers start by shooting Dennis in his sleep, but of course, Dennis is not an ordinary old man anymore. They do manage to pin Cassidy and inflict enough damage on him to kill an average man several times over. The team leader gets into a struggle with Jesse and loses his helmet. Jesse is quick to use the Word on him and has him kill the rest of his men who have survived the attack. Dennis takes out at least one of the attackers too.When the cops arrive, Jesse uses the Word once again, and they all begin to work for him and do whatever he says. The surprise attack is now a war of attrition with Jesse, Tulip, and the others awaiting another attack, which Jesse expects to happen anytime.

After the failed attack, Herr Starr is not pleased and is about to demonstrate his management style and how he treats failure on the two agents in charge by killing them. He’s prepared to carry out the decision on the spot, Starr even has a tarp ready to go on the floor of his office but his gun jams. One agent talks fast while breaking his weapon down and fixing it. She suggests releasing Brad which turns out to be something entirely different than what we are led to believe. It’s a high tech drone that we are meant to assume will kill Jesse and the others, but it lands and explodes elsewhere instead. That’s what this episode excels at, misdirection and innuendo. The whole story is like a magic trick, mostly smoke, and mirrors. The entire deal of convincing us another attack is coming turns out to be misdirection too, a way of keeping our attention with no payoff.

After changing his mind about killing them, Starr seems to want a little entertainment in the form of a hooker he can rape. Referred to as a “yes means no” when his agent places the call to acquire the prostitute for this pastime. There is a mix up however that results in four burly men arriving to rape Starr. He asks them to leave but since their orders are yes means no, they proceed anyway. He is shown being raped and displays no emotion during the experience in the same way he shows no emotional response about anything else. His eyes stay focused on the folder that is Jesse’s file while this is going on.

While they await the second attack, Dennis suddenly decides to celebrate his new lease on life by playing an Edith Piaf record at full volume. It is remarkably effective at creating more tension than there already was. Dennis is wild eyed and dancing around while this is going on

Ironically we see Dennis now treating Cassidy in a case of role reversal after the attack. Tulip is angry at Jesse for using the Word on her. While they wait, the second attack Tulip shoots a man left behind by the police to help clean the crime scene the apartment has become. We are led to believe he is working for Starr, but after the shooting that is never confirmed. It is something that is quickly dropped and forgotten soon after it occurs.

Jesse gets tired of waiting and tells the police they can go. Soon after he is shown having a drink in a bar, and Starr arrives and joins him. Starr begins a conversation with Jesse, and we are left to wonder what happens next for the season’s finale. Bastards.