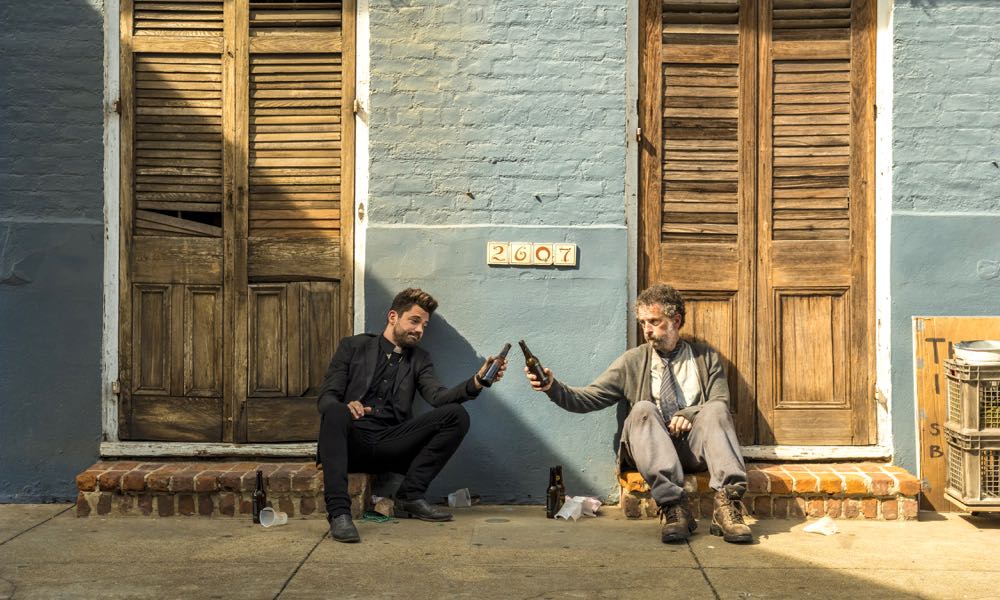 Pig was an engaging study in contrast between some very amusing moments and nightmarish surrealism.

In Pig we finally get to learn a little more about the leader of the men in the white suits, Herr Starr, and how he came to his current standing as the head of the group. Pig was the most amusing episode yet with some genuinely funny moments that got some genuine laughs out of me. The episode was not all fun and giggles though; the humor shared time with some very effective chilling surrealism in the form of Tulip’s nightmares. The question of whether the Saint of Killers is gone for good hangs in the air like the smell of something unpleasant that won’t go away.

The group’s mission to find God seems to have ended for the moment with the gang falling back on some old habits in the meantime to pass the time. The show continues to be engaging using its usual cocktail of dark humor, tender moments and violence. I enjoyed this episode a great deal.

When pigs fly is a phrase that is applied to when trying to express the unlikeness of something occurring and that’s just how this episode begins; with the unlikely event of a pig floating in the air. The event takes place in a  small rural village in Vietnam where the superstitious villagers see it as a miracle and begin praying to the hog in question. The news of the event gets the attention of Herr Starr the head of the group of the men in the white suits we later learn go by the name of The Grail

Herr Starr (Pip Torrens) has an intimidating countenance with a scarred face and damaged eye that makes his appearance somewhat chilling to behold. It’s a look reminiscent of an early twentieth-century Prussian officer that had one saber duel too many. Pig spends some time letting us get to know him better.

The introduction to his story begins with an interview process to join the group of men in white suits called the Grail. Starr is part of a group of muscular, athletic looking men who are applying to join up. He is the least athletic looking of the group of bare chested applicants, and in addition, his torso is adorned with two nipple rings connected by a chain.

As the candidates are tested,  Starr demonstrates a talent to approach each challenge in an unconventional, unique and particular way that works to his advantage. For example, when a much stronger man gets him in a choke hold he begins to engage in auto eroticism as a distraction to beat his opponent. Once his opponent is down, Starr clubs him to make sure his victim stays down. As each stage of the series of challenges progresses he emerges as victorious. In the final stage of marksmanship, his challenger is near perfect. Starr responds by simply shooting the man and eliminating his competition in that manner. He demonstrates a viciousness, ruthlessness, and lack of usually civilized restraint that makes him a deadly opponent.

Once accepted the leader of the Grail begins telling him more about the group. He tells him that Christ had an offspring before he died and they have the direct descendant in a secret location under armed guard in preparation for the second coming and the end of the world. As he is telling Starr he has a bright future with the Grail, Starr pushes him off the skyscraper balcony they’re standing on promoting himself as the group’s new leader.

As far the pig of the title story goes for some reason the floating pig and the locals praying to it was unacceptable to Starr, and he dealt with it by not only killing the pig but everyone else in the village as well. Afterward,  he gets a new assignment to another situation, and that situation is Jesse. It looks like the  Jesse and Starr are on a collision course.

Meanwhile back in New Orleans, the gang has finally finished searching every bar in town for God, and it casually agreed they need to take a break. They find a dive called the Hurt Locker where guys shoot each other for fun and place bets on the shooting victim getting up in a certain amount of time. They run an elaborate con on them using Cassidy as the shooting victim since he can’t be killed, and they take them for everything they got.

Tulip is having recurring nightmares about the Saint of Killers returning for revenge. These dream scenes were very creepy and frightening surrealistic interludes in sharp contrast to the rest of the episode’s events.

Cassidy gets drunk and passes out on the street, he s taken for dead since technically he is dead, and he spends the night in the morgue.

There is a moment where a random French professor explains to Cassidy what Dennis has been trying to tell him the whole time. Dennis is dying, and Cassidy has been a terrible parent. Could he make up for it by giving him the gift of immortality? Cassidy outright refuses and its left at that, but there is some indication he might be changing his mind towards the end of the episode.

Jesse is secretly concerned about selling that 1% of his soul to deal with the Saint.

Pig was one of the best episodes so far this season; funny, touching, creepy and engaging.