Preacher Review: On Your Knees 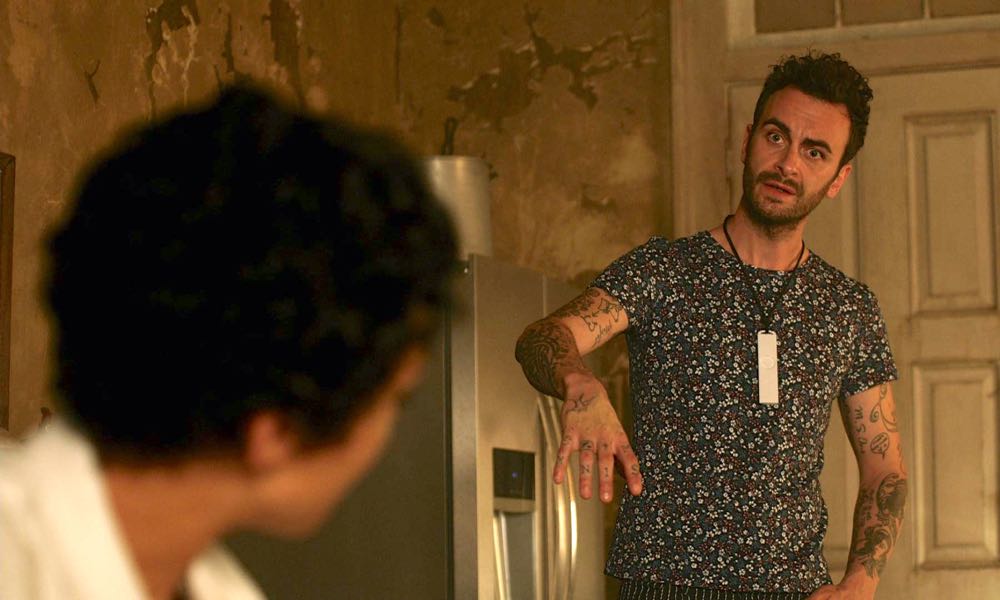 As one might expect in the next- to-the-last episode of the season, On Your Knees was an eventful chapter in the story that concerned itself with every front of the season’s narrative so far. It finished up (for now) one storyline, and went on to raise more questions of what happens next by setting up some promising looking storylines for season 3. In a season filled with the show’s trademark irreverent humor and satire, it seems the series is determined to remain focused on being an indictment of religion and Christianity in particular by pointing out the inherent absurdity of religious belief and examining the underpinnings of the superstitious beliefs that form its basis.

It was a busy week for hell on the show, Arseface and Hitler seemingly pulled off the great escape, and a former inmate returned. Arseface is put through the suicide scene again several times during the process which included the classic flight from prison tropes of crawling through narrow passageways. Each time he is put through it Arseface responds to the situation, in slightly different ways, like variations on a theme. He is confronted with a couple of additional issues from his past too, one involving an old school mascot and the other with his father. When all is said and done, Arseface is forced to shed his guilt and acknowledge that none of his problems are his fault. Hitler is along encouraging him through the entire ordeal. One has to wonder what the repercussions of Hitler escaping hell might be. I suppose we’ll find out sooner or later.

Next, we are treated to the experiences of the Saint Of Killers from his point of view, from when Jesse tricked him into the armored truck and what he went through after that. Included was a portrayal of all the trouble the Grail went through to get him out of the swamp and replacing his prison with an exact duplicate. We find out he was in the truck for weeks; and that he spent a lot of that time fruitlessly pounding his fists on the insides of the doors.

We are also shown a few of his memories, times he spent with his wife and daughter. It seems his wife was the religious one in the family. The Saint tries to change for her, even going through baptism for her sake. He hears her voice over and over again, saying that he needs to stop all the killing and drinking so that they can be together forever.

Meanwhile, we see Jesse sitting in the empty room where he first saw the man-dog who he is now convinced was God. The others are back at Denis’,  and we witness Denis looking for something under a bed Cassidy catches him and throws him out of the room. It turns out Cassidy is hiding the dog from Denis. Cassidy and Tulip are getting concerned about Jesse who hasn’t returned yet and begin discussing what they will do if he doesn’t come back. Just then Jesse returns and is okay. Like always everything they say and do at Denis’ is observed by the Grail spies down the hall.

The Saint, who we later learn is named William, makes a deal with his captors, the Grail, and they release him. He shows up at Denis’ apartment building soon after. He encounters Tulip first, who after getting over her shock, actually attacks him and tells him to leave Jesse alone. He swats her like a bug, bouncing her off a nearby wall where she falls unconscious. The Saint enters the apartment undetected and finds Denis first. We next see Denis lying on the floor apparently unable to move but with his eyes open and looking very surprised.

Next, we see a figure flying past the doorway of the room Jesse is lounging in; it’s Cassidy. The Saint enters the room and Jesse is cocky at first but after realizing he is unable to use the Word starts to put up a fight. The Saint punches him in the throat ending any chance the Word will play a role in the combat that will follow. Jesse puts up a pretty good fight, and Cassidy tries to help but ends up thrown through a wall with only his legs left visible. They are just no match for his supernatural strength.

Tulip joins the fray and begins hitting the Saint with a metal poker, and she puts up a pretty good showing for herself but ultimately fails also. The Saint is about to scalp Jesse when he is interrupted by the Warden from hell in her military style apparel. She calls the Saint by his name William and tells him to stop and that it’s time to go back to hell. The saint is submissive and leaves but not before warning Jesse with the phrase “another time.”

Before she leaves the warden tells Jesse he is lucky to have someone like Herr Starr looking out for him. So it turns out that Starr has connections in hell too, and just like that, the problem with the Saint of Killers is over, at least for now.

While all this is going on, we witness a television broadcast of the pope giving a speech about how God is gone but that there is still hope because of God’s promise to send his son Jesus the messiah to take of things in his absence. Jesse knows the truth about Jesus’ offspring and knows it’s up to him to fill in for the job.

After the fight, Tulip and Cassidy are hauled off in an ambulance with the grail’s trademark on it. We next see them in Starr’s office, and he is telling them everything that’s been going on with the Grail and their friend. Jesse has not mentioned any of it to them. They confront him about it when they see him. Jesse seems to think he has little choice about showing up in Jesus’ place and tells Tulip and Cassidy they can come along too.Tulip asks Jesse what he needs them around for and sadly, he doesn’t have an answer. This is the first time I have thought so poorly of Jesse and that he might be a colossal asshole. The next shot shows Jesse sitting there alone. He goes to the grail offices, and Starr is waiting there for him.. Jesse asks what’s next and in reply Starr kneels in front of him. It was a distasteful moment that made a creepy final scene for the episode.

On Your Knees was an aptly titled episode since there were so many times the act of kneeling came into play. In the Saint’s baptism scene the preacher instructs him to kneel When the Saint has Jesse at his mercy, he says your turn to kneel. It was one of the best episodes of the season. Is the gang splitting up? Is Jesse the new messiah? Can’t wait to see the season finale next week.