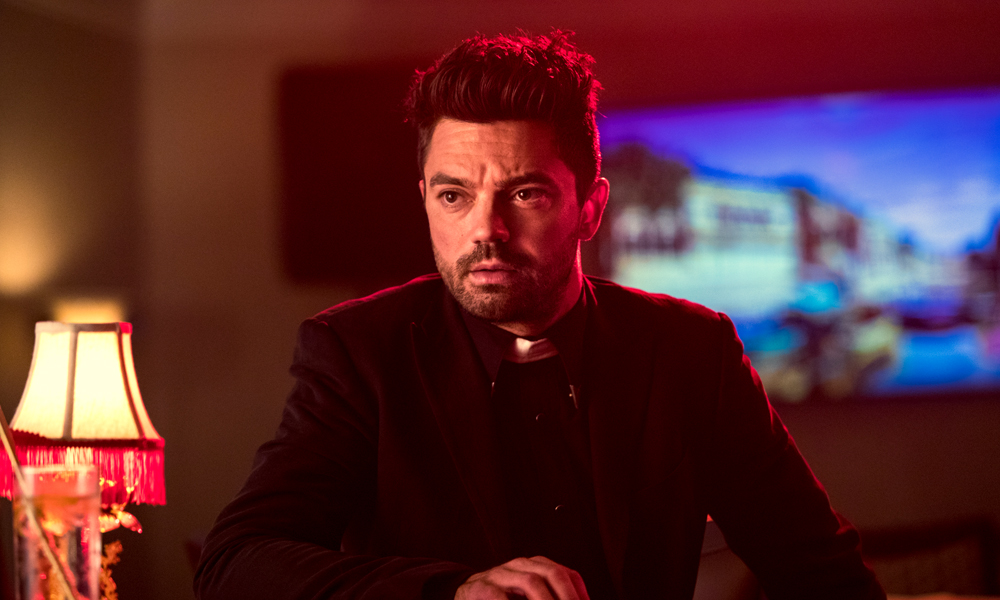 A familiar face returns from season 1 as the subject of a tragic subplot that begins and ends in this week’s episode.

The second episode of season 2 picks up right where episode 1 left off. The show continues at the juggernaut pace started in episode 1. The difference being the series narrative begins to get more complex this time around as subplots begin to emerge. The trio’s oddball odyssey continues surrounded by the mix of violence, loss of life, witty dark humor, and weirdness with no signs of slowing down.

The same qualities that made episode 1 enjoyable are still in evidence here. Preacher’s sense of lurid visual aesthetics is still in full force. There’an added element of more social commentary going on here than in the season premiere. Some of it relates to entertainers, fans and the nature of the relationship between them and the culture of guns in America.

The episode picks up exactly where the season premiere left off, with Jesse trying (and failing) to use Genesis to halt the Saint of Killers as the cowboy advances upon him. The Saint fires and then something happens that left me wondering about a lot of things. Just as he shoots, a passing delivery truck drives into the path of the advancing bullet which hits the driver in the head killing him. The truck swerves and hits the Saint pinning him to a nearby lamp post on the side of the road.

Coincidence or something more? What happened naturally caused me to wonder if  Genesis was involved in what seemed like more or less a miracle that saved Jessie’s life. Before it happened, I had already considered if it was possible the two powers might somehow neutralize each other out. The Saint’s power and that of Genesis maybe being equal in strength somehow. No answers are forthcoming for now, but it sure will be interesting to see what happens when the Saint tries again. 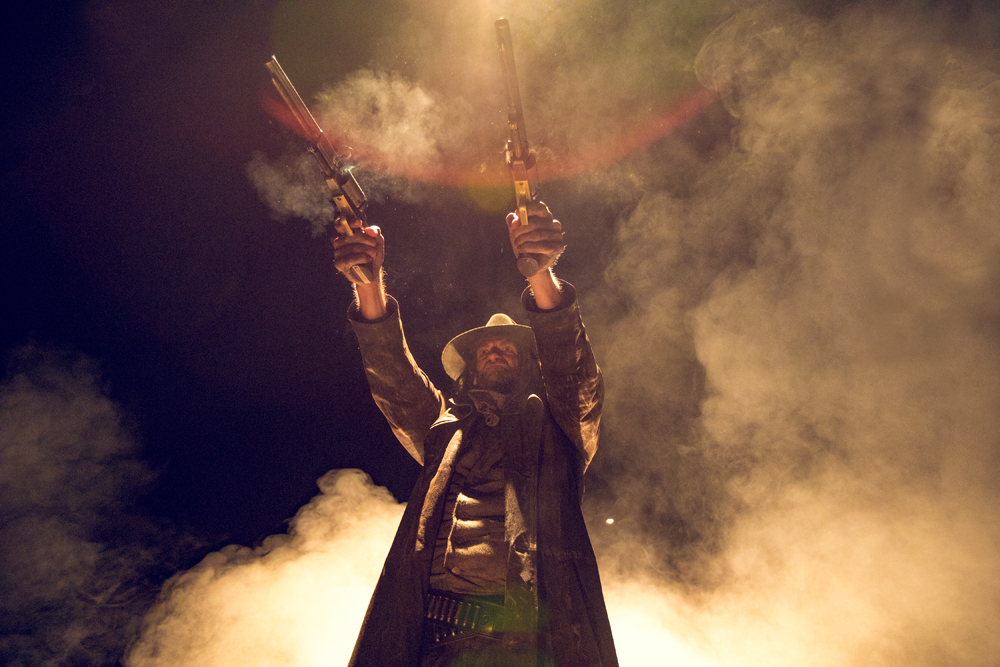 The sound of gunfire brings out a crowd from the motel that happens to be hosting the greater conference of gun aficionados, and they are armed to the teeth with all manner of automatic weapons and what not. They arrive to see the wreck but as they do the Saint recovers from his encounter with the truck no worse for wear and tear.

When Jessie sees the Saint’s not dead after all he uses Genesis to prompt the gun toting crowd into action and they unload a barrage of bullets on the Saint followed by one enthusiastic woman launching an RPG which is right on target. Smoke conceals the Saint’s location for a moment, and the gun happy crowd starts to celebrate and congratulate themselves on a job well done.

The Saint emerges from the cloud of smoke and dust and sheds the bullets that struck him in a shower of metal pellets that fall onto the pavement, and before the crowd can reload or even respond a massacre ensues. The Saint makes short work of the assembled crowd whose futile attempt to escape is in vain. He follows to the motel where Jessie flees and begins methodically killing everyone he sees. The sounds of the Saint’s guns resemble the sounds of cannon, and the bullets he fires sometimes seem to have the effect of artillery shells. He never seems to run out of ammo.

Jesse, Tulip, and Cassidy decide to got to Las Vegas based on Cassidy’s observation that an old acquaintance who may be able to help is there. That old acquaintance turns out to be the angel Fiore (Tom Brooke) who is in a new line of work these days. He is depicted as never having recovered from the death of his friend and fellow angel DeBlanc (Anatol Yusef) and after a lengthy succession of attempts at taking his life without success he finally realizes he can make a living as a stage magician dying over and over again based on the fact that when he dies he reappears unharmed nearby after it occurs. He applies this in the form of a magic act several times a day to the utter delight of enthusiastic fans. A tragic irony he endures as an expression of his infinite sadness.

The Mumbai Sky Tower, the eponymous hotel where the fleeing trio seeks harbor, and his help to call off the contract on Jessie’s life makes the perfect setting for this show’s lurid storytelling. Several things come to light while they are there.The Saint’s ability to track them occurs when Jessie uses Genesis.

Tulip has a past in New Orleans that’s finally caught up her in the form of a very large man. She is keeping it a secret from Jessie and Cassidy. She gets in a knock down drag out fight for her life against a big guy three times her weight, and she takes him down killing him without a gun. Tulip is bad-ass.

Fiore doesn’t help them mostly he says because he doesn’t give a shit, but also because he doesn’t trust Jessie not to use Genesis. Cassidy tries winning him over with a drug-fueled marathon of indulgence, and they seem to hit it off well which is odd considering one’s an angel and the other a vampire. Thre’s also a brief subplot where Jessie and Tulip are going to get married in a cheesy marriage chapel styled after the Indian themed hotel. The brief subplot just dissolves as quickly as it begins.

Finally remembering that God had visited the strip club for the jazz it’s decided they will travel to New Orleans to see if the trail gets warmer there. Tulip is not happy about this development for obvious reasons. New Orleans is the last place on earth she wants to go. The plan had originally been to use Genesis to lure the Saint to Las Vegas where Fiore could call off the contract. When they leave, Jessie uses it instead to tell Fiore to find peace. When the Saint arrives, he tells him where they have gone and asks for a favor to kill him so that he will finally actually die. His final act is loudly booed by the audience.

Mumbai Sky Tower was another great episode. The ability this show has to make such grim and dark subject matter enjoyable entertaining and even amusing is a remarkable accomplishment. It does an excellent job using the morgue humor to help alleviate the discomfort of the reality we all face – our mortality. The show’s creators seem fully committed to the idea that, what the hell, may as well go out laughing.