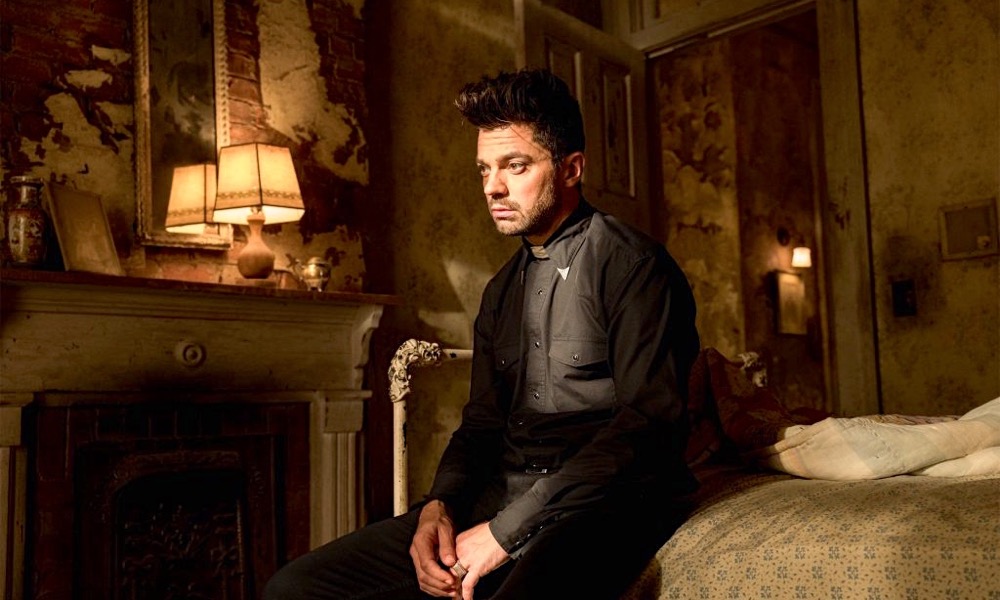 With Holes, the series took a little breather, a  break from the pace the show has established this season to give us a day in the life type edition this time around.

Ever have one of those days where life seems a little bleak and mundane and even bordering on dull? Sometimes you the response you can muster is to shrug your shoulders and get on with it. Sometimes there’s just no cure for a day like that except to wait for it to end. Sometimes you go through the motions and run a few mundane errands or hang around the house taking care of a few things that need doing. On days like this, you can take comfort in knowing it could be worse. It’s just one of those days. This week’s episode Holes had that sort of feeling.

Yes, we pay another visit with Arseface who has apparently adjusted to hell as if he’s doing time in the big house. He is shown doing pull ups and now having a very muscular physique, along with a somewhat appropriate surly attitude towards his fellow inmates, who along with him still sharing the rec room as living quarters and the place where they spend the day and just hang out. The warden, the large woman in the uniform, Ms. Mannering (Amy Hill), and her pet gorilla stops by once in awhile to make sure morale is suitably low and to remind them that friendly behavior will not be tolerated and will earn punishment.

Despite his appearance as a bad ass tough guy Arseface still displays an awkwardness that shows he doesn’t fit in with his surroundings or fellow inmates; it’s all an act to avoid punishment and avoid any unpleasant attention. Hitler despite Arseface joining in stomping him earlier, still treats him in a friendly manner. Hitler’s now somewhat of a gadfly in Arseface’s ear. The warden has explained that repairs are nearly complete, and they found the problem is there is someone extra here that doesn’t belong, and it’s putting a strain on the system.

When Mannerling asks who it is, that doesn’t belong Arseface comes close to raising his hand but resists the impulse. Meanwhile, everyone else there volunteers themselves as not belonging there in hopes of being allowed to leave. Hitler notices Arseface’s near confession, and that’s when he begins to harass him.

Finally, the Warden unceremoniously throws Arseface in the hole and tells him it contains the extrapolator. Once he is in there, he experiences the same events as always except this time Tracy responds to his advances with reciprocal enthusiasm and reproaches him for not saying something sooner. he’s so happy he breaks into song and they sing it together The dream turns into a nightmare when Jesse becomes part of the situation, and Tracy says she loves the preacher. Jesse and Tracy start getting amorous, and Arseface gets upset to the point that he does what he did in reality again, shoots himself in the face with a shotgun. Jessie is shown urging him on to do it.

Meanwhile, back on earth, the gang is still in New Orleans, and we see a flashback of Cassidy visiting his newborn son in the hospital nursery and singing to him. It’s a sentimental scene that is in sharp contrast to him taking care of the old increasingly ill Dennis of the present. These are some tender and heartbreaking scenes, a far cry from Cassidy’s usual drunken buffoonery. Dennis is still insisting on Cassidy biting him, and Cassidy continues to refuse to do it, although he is showing signs of weakening and giving in to relieve his son’s suffering. Dennis is wearing him down.

Jesse is on a mission to see if he can learn more from the CD of the actor’s audition and he goes to the local electronics store and asks the in store geeks for help. These guys are pretty amusing in their portrayal of dorkiness and enthusiasm, but in the end, they can’t help him. There is a close up of the disk as they go to trash it. The disk has an imprint that reads Grail Inc. Jesse leaves the place disappointed, frustrated and angry.

Speaking of the Grail, the couple that lives down the hall from Dennis is shown going about their day. Tulip takes it upon herself to repair all the holes in the walls left in the wake of the Saint’s visit, and when she gets to the apartment occupied by the Grail agents, the woman changes her appearance and lets her in to do her thing. They exchange pleasantries and Tulip extends an invitation to join her for a visit to the Hurt Locker, which Tulip apparently can’t get enough of and has become a regular patron of the bizarre bar.

The episode ends with Cassidy singing to Dennis who notices there’s something odd about how his father is singing to him. A look comes over Cassidy’s face as if he is experiencing some change inside. The episode ends on that note with the inference that Cassidy has changed his mind and is going to grant Dennis his wish.

So there you have it. It was an episode that on the surface seemed pretty uneventful, but that had a lot going on, although not as overtly as we have become accustomed to getting from this show. It did not have the feel of a filler episode. It was still an enjoyable one although it represented a significant shift in tempo and mood from the rest of season 2 so far. With only two episodes left to go, it seems likely this segment served as a set up for a gangbusters finale complete with cliffhanger(s). I think we can expect some exciting developments over the next two weeks.