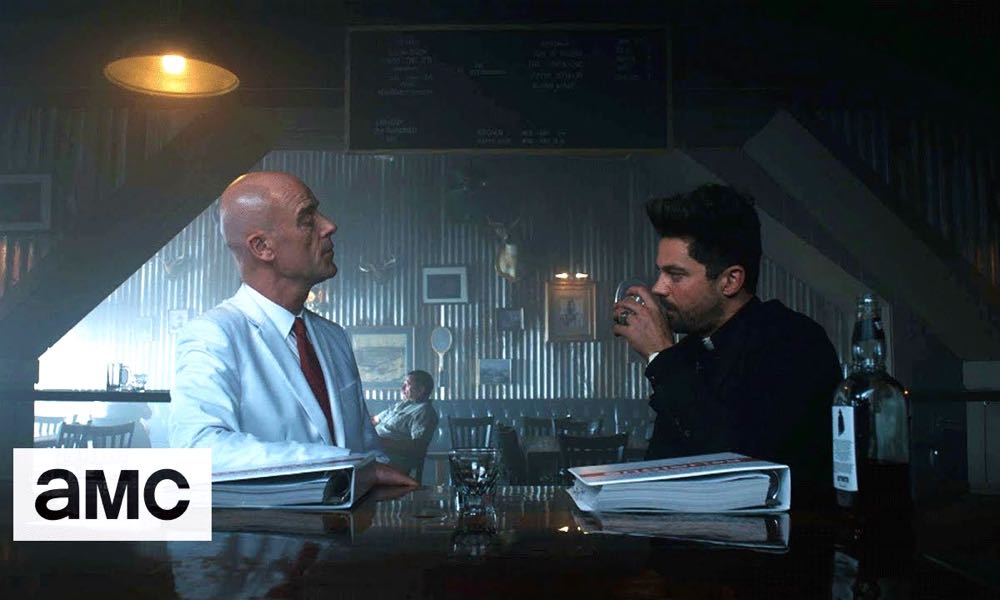 Jesse and Herr Starr get acquainted while Tulip hangs around at home and Dennis and Cassidy party.

After watching Dirty Little Secret, it sure seemed as if I had just seen a darkly amusing indictment of the Christian faith. I don’t know if that’s what the show’s creators set out to do, but it sure seemed that way. Other than some amusing moments that occurred as a result, it was another relatively uneventful episode.

The series seems content to continue its lapse into a mellower phase of storytelling heading into the season finale. The action packed opening episodes of the season seem all but forgotten in favor of a quieter tone the show has established as of late. Once again, there’s no sign of Arseface or depictions of hell this time around, and the Saint Of Killers seems to be a thing of the past, although his memory stubbornly lingers.

Not to say it was a disappointing edition, it was quite amusing if you have a perverse sense of humor like I do. With this series, it’s all the little things they do that keeps it among my favorite shows presently on television. Things like the myriad of interesting camera angles and other touches employed that help makes watching Preacher a unique experience.

Dirty Little Secret had a preface of a man and a woman having sex in a dimly lit room. Evidently, they are both enjoying themselves immensely. It;s a lengthy extended sequence that depicts them using several positions demonstrated by their silhouettes on the room’s walls. It’s when visitors arrive that it turns out to be taking place in ancient times and it’s revealed the man is Jesus. He swears her to secrecy about the sexual intimacy they shared, but one o the visitor’s is observant enough to know what they were up to and promises to keep her secret.

The woman’s home is revisited later in the episode. A baby has been born from that night. The man who promised to keep her secret is there, and when she asks if she can hold the baby, she is killed. All this serves as background relating to the direct descendant of Jesus mentioned in an earlier episode of the show. The descendant kept under armed guard by the Grail.

The episode picks up soon after where it left off last week in the bar with Herr Starr suggesting he might be able to help Jese find God. After he speaks, Jesse’s response is to smack Herr Starr in the face with one of the Grail ledgers and knock him down. He uses the Word on him to see if he does know the whereabout of the Almighty, and evidently, Starr does not.

Starr convinces Jesse he might be able to help with all of his organization’s resources.  We learn just how large an organization it is. Jesse agrees to join him for a visit elsewhere and they leave in a white SUV and go to one of the Grail’s compounds. There they meet the Pope and the Arch Bishop of Canterbury who both claim to know where God has gone and each has a somewhat far-fetched version of what they believe has happened to the Heavenly Father. Of course, both versions conflict with each other and they leave. Jesse recognizes their stories mean they don’t know where God is either.

Herr Starr drops a hint about the direct descendant of Jesus and Jesse is quick to use the Word again to get Starr to take him to meet this direct relative of Christ. When they arrive there is a man who it turns out is an inbred idiot who has the mind of a mentally impaired child, and when Jesse tries to use the Word on him he only seems agitated by it and begins to scream until he is taken away. This scene was quite disturbing.

These scenes, both the one with the church leaders and the other with the drooling idiot seemed like pointed commentary on not only the church of Christianity but on the religion itself, as worthless and laughable.

Meanwhile back at Denis’ Tulip is paid a visit by the grail agent from down the hall in her disguise as Tulip’s neighbor, She is hoping to gain something by getting a closer look an gently probing Tulip with questions, she messes up when she mentions things about Tulip’s past that she shouldn’t know, and Tulip is sharp enough to catch it, but ultimately lets it go when she gets distracted.

That loose floor board gets noticed again and when Tulip goes to fix it she digs beneath the floor and finds the Saint of Killer’s guns and sword where Jesse has hidden them Tulip is shown just sitting at a table she put them on and staring at them. Jesse is busted. I suppose the intent here was an attempt to show the contrast between Tulip’s day and Jesse’s as being sharply different in nature.

WE catch some glimpses of Cassidy and Denis partying down with some women I assumed are prostitutes, Denis continues to display behavior that indicates he is out of control.there are a couple of times he is shown frightening some of the women in attendance.

Like I said beyond Jesse’s experiences there’s not much else going on that’s noteworthy or out of the norm that we haven’t seen before. I suspect they are planning something spectacular for the season finale to make up for these mellower episodes. The search for God continues next week.