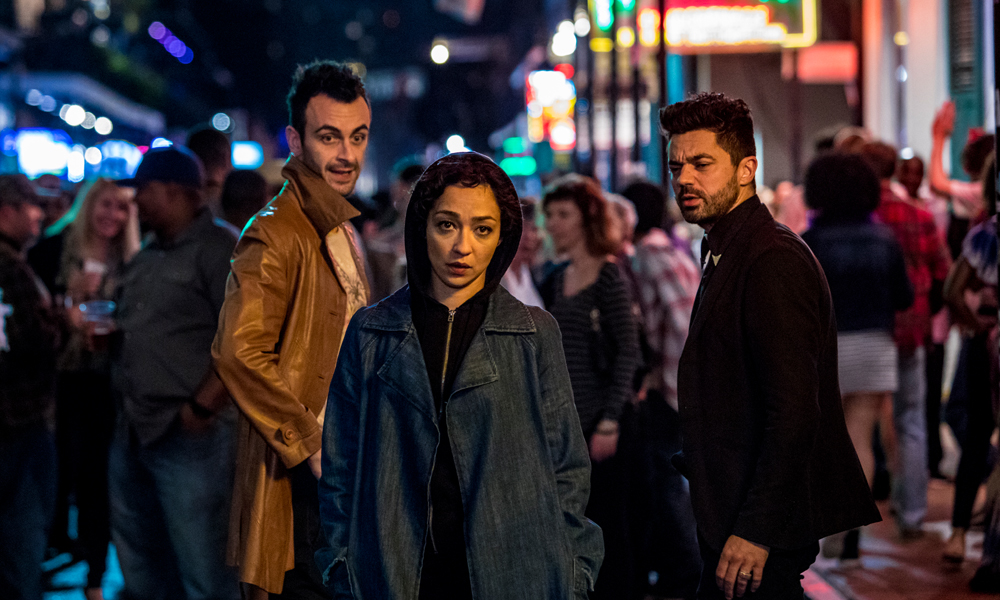 We finally get the backstory on Arseface and what happened to make him such a pariah.

While watching tonight’s episode of Preacher, I found myself wondering why I like it so much. There are the obvious reasons like the visual aesthetic that I adore and the elements of the show like a great cast, the dialogue, the sudden bursts of graphically portrayed violence, the supernatural stuff, and the characters. Also, Preacher has a great sense of humor which it uses well. Continuing to think along the same lines I focused on the dialogue for a minute. I realized it’s not a conversation these characters have, it’s a sort of a chit-chat that sometimes borders on bickering without actually crossing over into it. It’s a device that works well to ramp up the tension a little in anticipation of a fight that never occurs.

All of these things the show uses are readily available from other sources, so it’s more about the way this series blends all of it into an oddly appealing and darkly amusing mix and makes it its own. Only briefly into its second season, this series remains unique, engaging and delightful. It has a way of making a left turn when you expect it to make a right, and that lack of predictability goes a long way towards keeping it interesting. Tonight’s episode was no exception.

The episode opens with a visit with Arseface (aka Eugene). I have been seriously curious about his character and what happened that resulted in his disfigurement and becoming a social outcast. It’s a preface to the episode that nearly upstages the rest of this week’s show.

It begins with a flashback of that fateful day that changed his life and his face forever. The glimpse into the past clears a lot of things up regarding what happened that day. The story surrounding the events provides Eugene with instant redemption for crimes he never committed and shows that the only crime he’s guilty of is that he’s not very bright.

It’s on that fateful day he gets a call from Tracy Loach (Gianna LePera) who we have met as the girl with severe head trauma. For anyone else, this might qualify as a booty call, but that’s not the case with Eugene. As we quickly learn, his relationship with Tracy is strictly platonic. She treats him like a cross between a loyal puppy and a gay friend. She calls him over that day because she’s distraught after hearing the guy she has been dating was spotted getting head from a girl who is only considered a five on the attractiveness scale.

This gossip is devastating news for Tracy not because she is angry he was caught cheating but because the situation reflects poorly on her and may cause her social embarrassed. All of this reveals what this Tracy was like before her head damage occurred. Not only is she super shallow but it turns out she’s no stranger to carnal knowledge herself.  Tracy’s planning on committing suicide with her father’s double barrel shotgun, and as Eugene reads her suicide note, we find out even more about the girl he adores. Her letter includes a litany of guys she’s had sex with, and Eugene can barely conceal his shock while reading it. She makes a casual comment about one affair only being anal, so it shouldn’t interfere with her chances of going to heaven.

He talks her down from the ledge, and she leans on him for comfort. Mistaking it for them having a moment he kisses her. She’s shocked and expresses disbelief he would ever think it would be possible for them to be together in that way. She utters an Ewww at the thought, grabs the gun and blows off the top of her skull. Arseface freaks. Her mother picks that moment to return and tries to enter the room. Finding the door locked and hearing Eugene’s voice, she reaches the wrong conclusion about what is going on inside. Eugene’s in a panic. He considers several options including climbing out of the window. Eugene finally settles on using the gun on himself. The gun misfires and all is well until he decides to look down the barrels. The rest is history.

The scene shifts and we find  Eugene n a drab, featureless room with a strange flashing light fixture in the center of the ceiling.  Just in case we can’t figure it out the word HELL  in large block letters appears on the screen.  The door opens, and a large imposing middle-aged woman in a uniform looking outfit enters the doorway looks at him sternly and tells him not to move. Leaving, she closes the door behind her. 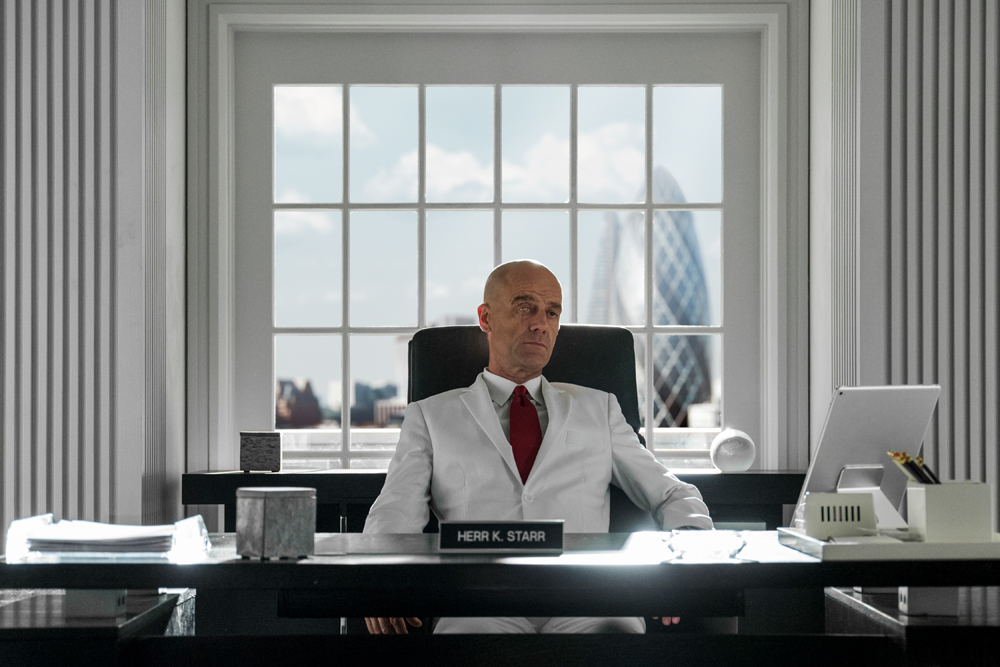 The next scene is standard shots of New Orleans French Quarter which if you believe what you see on TV is always in full Mardi Gras party mode. The first place they ask a man beckons for them to follow.  After following a winding path through a restaurant, they end up in a basement where behind a curtain is a large man in a tight fitting Dalmatian suit and a woman seated next to him holding his leash Their guide begins rattling off prices regarding different levels of participation. Cassidy starts reaching for his money but Jesse says no not interested in that, so they leave.

Tulip feigns illness, and Cassidy says he is not going to any hotel because his friend Dennis (Ronald Guttman) would never forgive him if he didn’t stay with him. So Tulip and Cassidy head to his friends leaving Jesse to wander the streets and bars in his search for God alone.

Tulip is noticeably nervous on as they walk along and she, not that pleased to run into an old acquaintance who recognizes her. Even Cassidy notices she seems jumpy and distracted. When they arrive at his home, Dennis does not seem pleased to see Cassidy. He makes a lengthy statement in French, but neither Tulip or Cassidy speak it. They follow him in and proceed to make themselves at home. Cassidy attempts to start up a conversation with their host who obviously has no interest in being sociable. He stays stubbornly focused on watching the Three Stooges on an old black and white TV.

Jesse wanders the city asking people if they have seen God. He rambles around drinking until a bartender wakes him up and says it’s time to go.  He gives Jesse a tip to see a local singer that might be able to help. The show takes on a noir feeling at this point. The singer Lara Featherstone (Julie Ann Emery) seems like something out of one those old movies. She is enigmatic and mysterious. She agrees to meet him outside, he agrees but he sees her get in a taxi and leave. Almost immediately he hears a crash. He sprints around the corner in time to see her get snatched by a group of men in white suits with white masks. He assails them and in an excellent fight scene kicks all of their asses.

They go back to her place, and she makes a big show of leaving town with her baby. She shows lots of interest in Genesis and insists on knowing how he got the men to stop the truck. He demonstrates Genesis for her and puts her in a taxi. Soon after we see her rejoin the men in white in their truck. She was in league with them all along.They are part of a religious fascist organization that wants to rule the world led by Herr Starr. The whole thing was a setup. Jesse doesn’t know it, but he is now hunted for what he has.

Something odd happens to Jesse right after she leaves. He’s looking at a poster for a local attraction called Angelville, and the poster seems to have a hypnotic effect on him. Tulip calls at hat moment and breaks the spell. It’s another instance that she needs something from Jesse she can never seem to put into words, perhaps it’s just a kind word, but I think it’s knowing he loves her.

Tulip goes out alone for cigarettes; she knows she will be spotted and probably caught by the people that are after her She has decided it’s easier to give in than to exhaust herself stressing over getting caught.

The episode ends with another visit to hell. Arseface has discovered the door to his room is not locked. He ventures out and finds an endless corridor filled with doorways just like his. He calls out is anyone there, and a voice responds soon followed by the person it came from – Adolf Hitler.