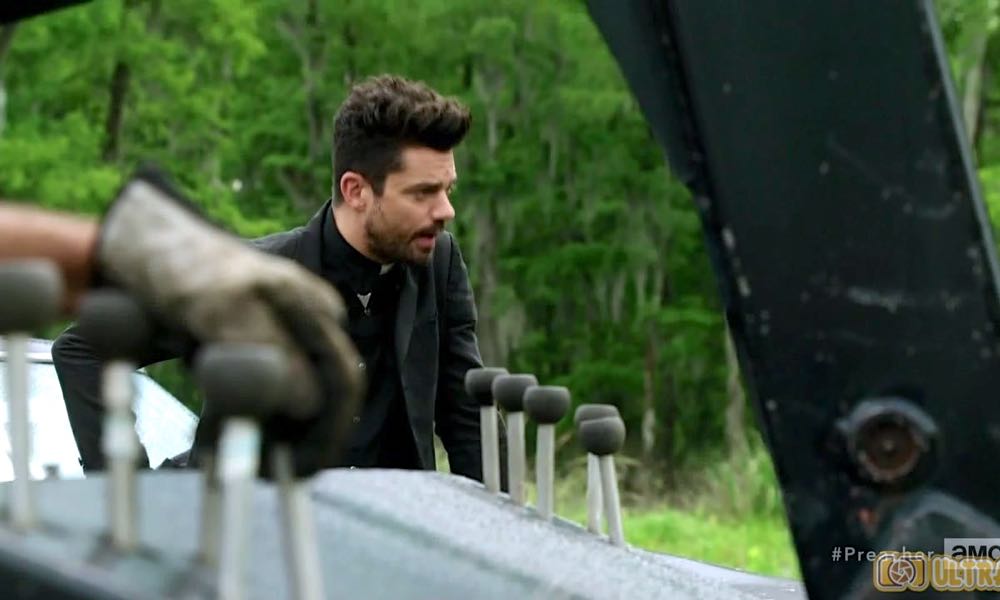 The devils in the details and that’s what this week’s episode was all about; details about Jesse’s past and on the hell side details about Hitler’s history too. Speaking of the hell, it’s surprising Herr Starr is not down there running things; it would suit him perfectly.

Once again the series is working the juxtaposition of events here on earth and what’s going on down below or wherever hell is kept. It was another low key episode which makes me suspect they have something more sensational in store for the season’s final episodes. With only two left, it won’t be long before we find out.

I would like to take a moment to express appreciation for the excellent writing done on this show, especially regarding the dialogue. It’s just so darn good, it makes me smile all the time.

The episode starts out with a flashback of experiences from Jesse’s youth. There’s a shot of a locker of some kind being hauled up from beneath the swamp. Men work to unseal and open it to reveal a young boy inside who they haul out and place on the dock. It’s young Jesse, and he looks miserable from the effects of his torment. An old woman approaches, and she asks him what his name is. He replies Jesse, and after a pause, he defiantly adds Custer. Apparently, that’s the wrong answer because the woman orders him returned to the box he was in and its sent back into the swamp with him inside.

That is treatment that no one should ever have to endure, let alone a child and it seems not only cruel but unnecessarily sadistic and plain old mean.

The process is repeated later in the show, and it seems his defiance is gone because he answers differently and the woman who turns out to be his grandmother, appears to like his answer better this time.

Next, we are shown a scene in the swamp again, and this time it’s the armored truck Jesse sent in being retrieved. Tulip is there too, and she’s giving Jesse a heaping serving of shit about lying in regards to the Saint of Killers. Jesse’s doing his best to reassure her, but when the truck is back on solid ground, he looks in the windows of the back doors and seeming perplexed he opens it up, and the Saint is gone. There’s no one inside; just swamp water and some debris.

It turns out the Grail is involved in the mystery of what happened to the Saint, Herr Starr is shown discussing it with one of his agents. It seems he’s going out of his way to spook Tulip even more about the Saint. He goes on to explain the ancestor of Jesus is an imbecile, and he plans to replace him with Jesse and use him to propel his agenda.

Next, we pay a visit to hell where the inmates are being subjected to a test to find out the one who doesn’t belong there. The test involves being shown a series of images while hooked up to a polygraph machine. There is more that one visit to hell this week and Hitler plays a key role in what occurs. Once again we are shown the same day in the cafe, but with e few added details this time. Hitler shows his artwork to the gallery owner and his work is rejected as not good enough for him.

Also, a pair of gunmen enter the cafe and begin terrorizing the place. When one of them drops his gun, Hitler retrieves it, and instead of taking command of the situation he meekly returns it to the man that lost it. The customers of the place are exasperated by Hitler’s cowardly behavior including the woman he is sharing his table with who confesses she is seeing someone else before she leaves in a  huff.  Arseface and the loudmouth bully inmate we have seen before witness all of this. There is also a matter of plum cake Hitler ordered that gets served to another man that arrived later than him. Hitler was having a shitty day, and it’s implied all these little things added up to make him into what he later became. He then admits to Arseface it was the last day he was nice.

Later when Arseface is taking the test, Hitler arranges an amusing distraction, and while the warden is away, he sneaks in tries to help Arseface escape.

Back at Denis’ place the group is discussing going on a vacation, and it becomes apparent that Cassidy and Tulip are sick of New Orleans and would rather be anywhere else in the world. Jesse suggests a tropical island as a good place to consider and then dashes cold water on their fantasies by insisting he has to keep looking for God before they leave which pisses them off.  Denis has a dog now, and it never stops barking which adds to the tension and while they are squabbling Jesse has a sudden epiphany about the place they first visited with the guy in the dog suit. Suddenly Jesse is convinced that was indeed God and goes to find him, but the couple is gone.

While this is going on Tulip visits a local metal worker accompanied by her neighbor, She is trying to get ammo for the Saint’s guns and tries unsuccessfully to fire one of them. Then they try to melt them down with no luck. They are dropped into molten metal and refuse to melt or even get hot. Tulip finally disposes of them in a random mailbox.

Jesse ends up back at Herr Starr’s, and Starr is working on Jesse trying to convince him they should join forces and how helpful his resources would be in Jesse’s quest. He says e understands Jesse and somehow comes up with recordings of every prayer Jesse ever uttered since he was a child. There is no explanation of how this could be possible, and Jesse never asks how these recordings could exist. When they are all done Starr is convinced he has sold his case, but instead, Jesse uses the Word on him and tells him to shove all the recordings up his ass. Later, Starr has his pants down pulling large amounts of recording tapes out his bottom.

There is one final scene inside a large empty warehouse, with the same Japanese armored truck inside it and a voice is saying that whoever he is speaking to should do what he does. Immediately after that, a man is shown fleeing the scene as fast as he can. It looks like the Saint is back. I suspected he would be.