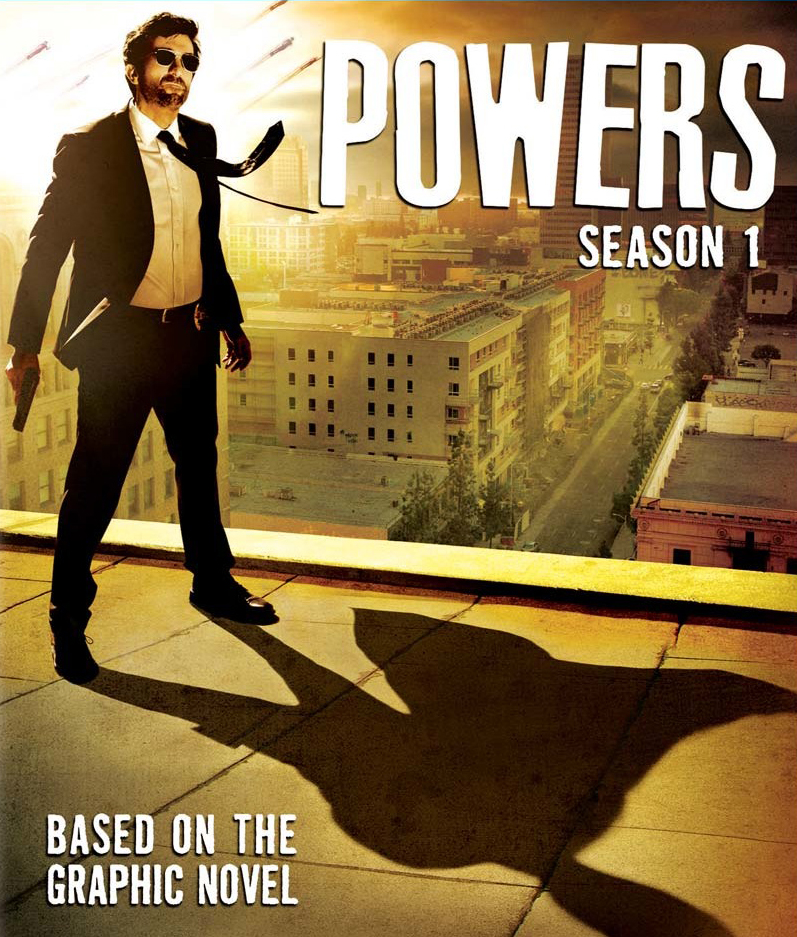 Brian Michael Bendis was the reason I got back into comics. His work on the Ultimate Spider-Man hooked me back into the medium for a good ten years. I read as much of his work as I could. Yes, this includes his stint on Daredevil, The Avengers and his work on Powers. Powers is different. First, it wasn’t one of his Marvel books, nor was it even published by Marvel. The hero of Powers is a detective who was once a superhero, but lost his abilities. Once known as Diamond, Christian Walker now investigates matters that involve the superhero community called Powers. The book itself was launched in 2000. It was quickly optioned for a TV series, but it took until 2011 to get green lighted. When the series was announced, I quickly dusted off the old graphic novels and re-read the adventures of Christian Walker.

One last thing before I get into my review. Several years ago, I attended a Comic Con with Brian Michael Bendis present. A fan asked why he wasn’t writing any TV shows. Knowing full well that dialogue and multiple character interactions are two of his strongest suits, I thought the same thing. I’ll paraphrase Bendis’ reply (this was back before Marvel’s Secret Invasion landed): I’ve written for TV and I don’t like it. Everyone changes my dialogue, from director to actor. In comics, 100% of what I write goes on the page.

Brian Michael Bendis does have a creator credit on the series (as he should), but only one writing credit on one episode. This makes sense as Powers the TV series is a pale shadow to the comic. Yes, I am one of those people who says the book is better. Well, it is. In the comic, we are introduced to this world through Deena Pilgrim. Deena is Christian Walker’s new partner. The story unfolds on who Walker is through an investigation of a Powers death. The hook to reading this comic was that you wanted to know all you could about how Walker fell as a Power and how he became a police officer. The book was dark, but not so much in the vein of Frank Miller’s The Dark Knight Returns. It had a realism to it. Powers were seen every once in awhile and as they pertained to the story. Think CSI: NY and Law & Order: Special Victims Unit (minus the court of law part). The TV series, sadly, fails at keeping the mystery and suspense at every turn.

We witness Walker (Sharlto Copley) lose his partner after a Powers arrest. His new partner, Deena Pilgrim (Susan Heyward), comes right from VICE to Powers Division. She knows of previous identity and quickly fills us in even further. As each episode unravels, we should be learning more about Walker, but we already know everything . We are spoon-fed all the answers in the first episode and it leaves little to wonder about. Heyward’s view was supposed to be my window into this world. This never happens. Instead we have a “wanna be”, someone who wants to be a Power, named Calista (Olesya Rulin). Calista walks us through our world of heroes, villains, cops, and wanna be’s. From watching this, one can tell that, clearly, Powers is her story. If only she could have made me care about her character.

The casting of fanboy favorite, Sharlto Copley, was brilliant. So why did it seem as if they were holding the South African star of District 9 and CHAPPiE back? Was it because he was using an American accent? He certainly didn’t look like the character, yet any time he got going someplace and opened up to the audience, we cut away. This is his story. Did we really need to see the “wanna be” and all the mystery that Walker was trying to unravel? Aren’t we supposed to be along for the ride? I mean, every time the series introduced a mysterious new character, we knew everything we wanted to know about them in five minutes.

There is such a divergence between what was on the written page and this live action series that I had to completely break away from all that I remembered. Yet as I did that, I was reminded of what Bendis said at a panel to a fanboy who wanted to know why he wasn’t writing television. The first graphic novel was called “Who Killed Retro Girl”. When Retro Girl (Michelle Forbes) and the events that lead to the iconic “Kaotic Chic” did surface, I was so disheartened that I was already checking to see how many more episodes remained. Do yourself a favor, run out and pick up the graphic novels if you have never read them. You’ll love them. If you need to binge watch a good super hero series, check out Marvel’s Daredevil on Netflix. It’s perfect.