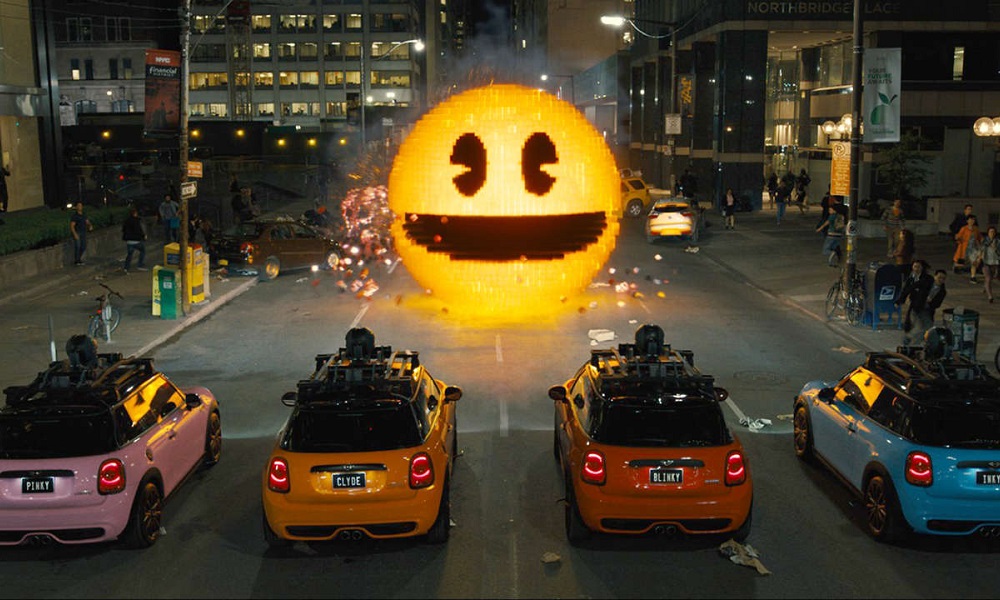 Like most Adam Sandler joints of late, Pixels is getting kicked around like a Donald Trump piñata by the critics, and I can’t say as I blame them. But covering its awful qualities in detail – while certainly accurate and no doubt fun – disguises the single-minded simplicity of its badness. The more people rant about the countless little things, the more they disguise the one big thing that drives them all forward… and  sends discerning filmgoers into fits of homicidal rage.

This is a lazy fucking movie.

It isn’t just that it’s built on a colossal gimmick wrapped around nostalgia no one associated with it understands and which was cynically deployed for the sole purpose of inducing enough mild curiosity out of us to shell out ten bucks. It’s not that everyone involved looks bored out of their minds, or that even a bland and resolute studio director like Chris Columbus is far too good for the material. It’s not that it wastes the talents of Josh Gad and Peter Dinklage, who look like they made the movie  in response to some insidious form of blackmail. It’s not even that it’s sexist, racist and morally repugnant in that uniquely Adam Sandler way that makes you want to forswear humanity and go live in a yurt.

It’s that it clearly does not give one single solitary fuck if we care.

It doesn’t have a script so much as a parcel of high concept notes, hastily scribbled on cue cards and stapled together about a week before they started shooting. Nobody bothered with anything more, despite the fact that they probably could have mined some decent material out of it with a little work. Nobody could be bothered. Nor did they care to double-check any of the details of the 80s arcade games that supposedly brought us all into the theaters. So fans in the know will find themselves saying things like “they never used ray-guns in Joust” and “did these people ever play a game of Donkey Kong?!” And every time we hit them with those questions, the filmmakers just look right back at us, sneers on their faces and ask what we’re gonna do about it. So yeah, a little rage may be in order for this one.

Once again Sandler plays a lovable loser on the path to redemption, a child video game champion whose life ended the minute he finished second in the World Championships. (It’s about as creepy as a Little League team committing ritual suicide after losing the championship.) And yet despite working in a dead-end tech support job, he manages to stay best friends with the President (Kevin James), who he grew up with. Then the aliens attack, borrowing the icons from our 80s video games that we shot into space for some reason and challenging us to defeat them in formal combat lest the planet be destroyed. That brings Sandler back into action, along with his former rival (Dinklage) now in jail for computer fraud and his basement-dwelling sidekick (Gad) who’s graduated to full-bore conspiracy theories.

Beyond that and their supposed video game skills, I can’t say much about them. Motivations are vague, as are the ground rules, which the aliens seem to change out of sheer pique and which render the stakes in the contest completely irrelevant.  Not that anyone onscreen worries. They take time out for limp flirtations and fancy soirees while the generals fret about being shown up by these aging nerds whose only skill is playing Pac-Man and hey wait a minute aren’t ALIENS THREATENING TO DESTROY THE EARTH?! You’d think the fate of humanity would inspire at least some mild concern with these people, but the whole cast sometimes looks like they’ve been doped with sleeping pills.

That would explain the presence of so many actors who are clearly better than this – including Sean Bean and Brian Cox –though at least one of them could have made themselves interesting. The law of averages states as much. But it’s too much to ask from a movie that doesn’t believe in a single thing it presents to us, and who views its purpose as complete the minute it suckers us out of our cash.

And that really is the worst part. Pixels is a miserable, boring experience, but nothing about it couldn’t have been saved without a little more care and planning. Give the aliens a better sense of why they’re here, and why they use video game characters as their chosen weapons. Find a more clever way to play with those old arcade games in the real world. Give us a laugh – just one lousy laugh – or ask us not to accept Sandler as God’s gift to offensively supine women for yet another jaw-dropping film. If it had done any of these things, Pixels might have justified its existence. But no. Not because it can’t, but because it won’t . Naturally it will make a mint… and frankly I suppose that’s fitting. As tragedy segues to farce again and again in this surreal summer of 2015, it’s only fitting that the season’s worst movie would follow suit.