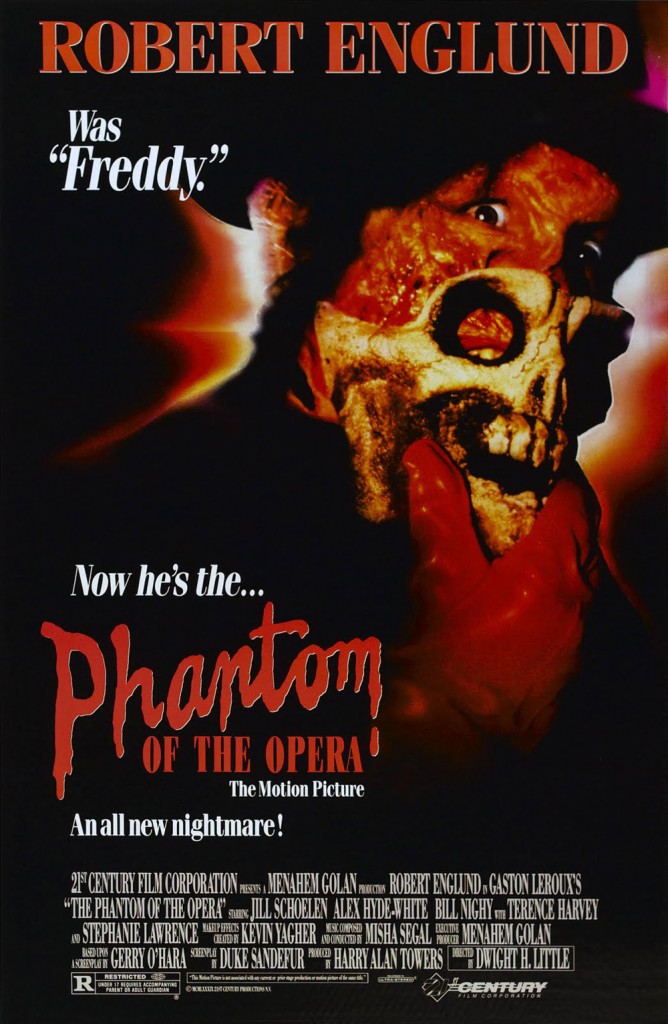 Each and every one of us has a guilty pleasure when it comes to movies. In 1988, I was really into Andrew Lloyd Webber’s “The Phantom of the Opera“. My parents took me to NYC (my first time there) and we saw the show. I loved everything about it. Naturally, I devoured anything I could get my hands about the Phantom. I had the expanded and regular soundtrack (there was a difference). I read the original novel by Gaston Leroux. I then started watching every version I could find at the local video stores. A year later, Robert Englund, yes the Freddy Kruger, was going to star in  a new film version of The Phantom of the Opera. Now, I hadn’t seen a whole Nightmare film all the way through at the point, but I did watch the TV series “Freddy’s Nightmares”. I was ready for this version. The film never played in my town and it wouldn’t be until it arrived on cable that I would see it.

This is so not Andrew Lloyd Webber’s The Phantom of the Opera. In fact, the film is a gothic horror tale laden with with gore and blood thirsty revenge. Christine (Jill Schoelen), finds an old mysterious opera aria to sing for her Broadway audition. When it is her turn, a sandbag falls from the scaffolding while she is singing. The combination of the shattering glass and the song transports Christine back to Victorian London where she is an American understudy to the opera’s diva, and falls naturally into this “former life” scenario.  While at the opera, she is being tutored by man she has never seen, an “angel of music.” This is, of course, the Phantom of the Opera (Robert Englund). Where this film takes a departure from all other versions of the story is that this Phantom cut a deal with the devil for his music. He sold his soul so that people would love his music. However, that is all they will love him for. Horribly scarred, the Phantom lives in hiding and skins, yes skins. He uses the flesh of people who do him wrong to create his mask. Incredibly gruesome, the film plays more like a Hammer film than a tragedy about a fallen musician. If truth be told, this Phantom of the Opera is more of a Hammer film than Hammer’s own 1962 version with Herbert Lom. It even has a dash of Jack the Ripper thrown in with Scotland Yard hunting him through the streets.

So why is this film a guilty pleasure? It is not great film, but nor is it an awful one. There is a real heart to this story, and it comes from two things. The first being Misha Segal’s incredible score. Each and every note delivers the somber love story that the Phantom has for both Christine and his music. Yet Segal can turn the score into a horrific nightmare when the devil burns a man’s face and the Phantom glides through the rat infested sewers. The other heart in this blood curdling tale is Englund’s performance, which he admitted to taking simply to have his name on the same page as Lon Chaney and Claude Rains. He makes you believe that this character is doomed to exist in the shadows and never part take in the world he loves so much. Yet he won’t fully abandon that world, hence the mask.

Scream Factory has released the The Phantom of the Opera on Blu-ray and it is not a bare-bones Blu-ray.  It is packed with tons of special features including commentary by Englund and director Dwight H. Little (Halloween 4). What you will really want to see his “Behind the Mask: The Making of The Phantom of the Opera”. It contains nearly 30 minutes of backstory and interviews from the cast and crew. Yes, there was a sequel written, that IS a young Bill Nighy (Shaun of the Dead), and you get to hear the details of just how they stayed away from Lloyd Webber’s version.

This is so not Andrew Lloyd Webber’s The Phantom of the Opera. In fact, the film is a gothic horror tale laden with with gore and blood thirsty revenge.

Each and every one of us has a guilty pleasure when it comes to movies.

Each and every one of us has a guilty pleasure when it comes to movies.

This is so not Andrew Lloyd Webber’s The Phantom of the Opera. In fact, the film is a gothic horror tale laden with with gore and blood thirsty revenge.