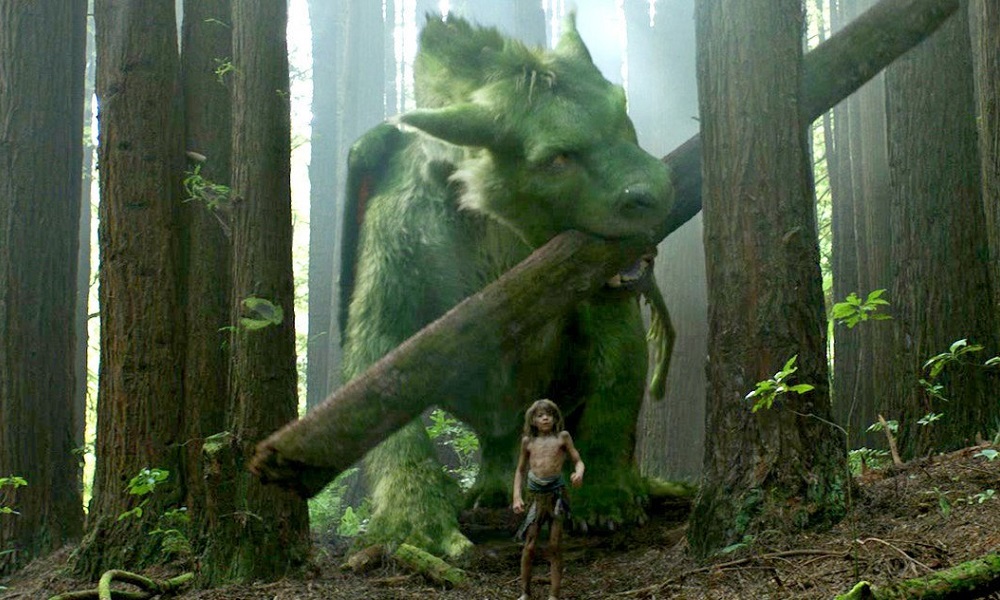 There’s something to be said for gentleness in an age such as ours, when the news cycle has reached nuclear levels of toxicity and everywhere you turn finds fights being picked over increasingly petty grievances. Even the movies seem awash in cynicism, and while that can make for potent commentary – or at least an appreciably iconoclastic escape – it wears on the soul after a time. We lose our capacity to look at the world with wonder, to find the things that unite us rather than divide us, and to remind us that there’s still magic to be found if you only look.

Pete’s Dragon arrives in the midst of one of the most singularly successful studio runs – both financially and creatively – I have memory of. Four of the top five grossing movies in 2016 come from the House of Mouse, and while the rest of Hollywood wrings their hands at the smoking debris left behind this summer, the Disney crew is busy focusing on whatever triumph comes next. Four movies, averaging close to $1 billion in worldwide revenue apiece, accompanied by a Rotten Tomatoes score of 90% or above for all of them. (With an 87% rating as of this writing, Pete’s Dragon would be the runt of the litter were it not for Alice. Poor unfortunate Alice.)

I submit that there’s good reason for that, beyond Disney’s track record for animation and their possession of the sweetest franchise plumb in Hollywood right now (i.e., the MCU). They remind us to look for the best in the world rather than the worst, and while they don’t ignore the threat imposed by acrimony, prejudice, hatred and blame, they resolutely remind us that we can rise above it all. This is the textbook example of tapping into the zeitgeist: looking at a national community exhausted, fearful, at times blind with fury, and desperate for any signs that we can make it to the other side. It meets that fear with the quiet smile of an old friend, hand outstretched. “Come on,” it whispers to us. “It’s gonna be okay. We got this.”

Disney cracked that code a long time ago. They’re succeeding simply because they know how to deploy it.

Pete’s Dragon aims for a younger audience than other Disney films this year, with the conflict reduced and the villains as non-threatening as you’re likely to find. But even here, it knows that darkness exists, when the woods grow deep and you’re not sure what lies behind that next tree. Its gentleness is no less of a comfort for the spookier side and its strengths no less welcome as a result.

It’s easy to dismiss it as another cynical regurgitation of an old classic, but this new Pete’s Dragon is far more reboot than remake. Indeed, if you squint at it right, it could almost be a sequel to the first film, which ended with its self-titled cartoon firebreather flying off to find a new child in distress. He hits upon a winner with a little boy lost in the Oregon woods: wandering from a car wreck that left his parents dead and utterly helpless as the wolves quite literally close in.

Enter Elliot, essentially a huge green shaggy dog who can’t speak but conveys everything we need to know about his kind heart – and mistrust of the world – with a single friendly galumph. He takes this new Pete (Oakes Fegley) under his wing, and together they find a secret world beyond the reach of men, where life is simple and holds no fears.

Director David Lowery understands the power of that scenario, distilling it down from the first film without staying beholden to the nuts and bolts of the plot. There’s no sinister family of swamp people trying to snatch Pete back: just a grown-up world that sometimes cares but never understands. Naturally, that world comes poking into Pete and Elliott’s makeshift Neverland, first in the form of a friendly forest ranger (Bryce Dallas Howard), then in the more menacing shape of men with guns and eyes full of greed.  The cast and crew take a less-is-more approach that keeps the melodrama at bay, with impressive results. There’s no cloying sentiment or saccharine declarations of love here. Everyone is quiet and calm, and with Robert Redford’s Wise Old Man as our narrator, it keeps a lid on the excess emotion. It trusts the story’s emotional core to take care of itself.

The dragon himself remains a big draw, of course, markedly different from the animated figure in the original, but easily invoking the same sense of a goofy mutt looking out for its best buddy. Elliott has the same basic features as his predecessor, including the ability to become invisible whenever any pesky grown-ups come poking around. He and Pete belong to each other, and the film’s various dangers – represented by Karl Urban’s misguided logging foreman – exist mainly to test the pair’s dedication to each other.

By focusing on that and letting the rest of the story take care of itself, Lowery finds the perfect means of updating the first film. It affirms our common humanity without rubbing our noses in schmaltz, and reminds us quietly yet firmly that the world is so much bigger than what we choose to see. The humble acceptance of that truth gives Pete’s Dragon a surprising power, and by refusing to gild the lily, the director and his team let us embrace it on our own terms. It’s a deeply affecting experience, and while the film remains just a boy-and-his-dragon story in the end, its depths hold wisdom and comfort.

Movies can distract us, engage us, make us think, make us hurt and sometimes even make us angry. But they also point the way through our woes and troubles… or at least give our flagging hearts a chance to rally and move forward. Whether by fortune or design, one studio seems to have stumbled on the right combination of elements to pull that trick off again and again. For young souls and older ones weary with the weight of our troubled times, here’s a movie that can make you believe in magic. It’s a simple enough trick, but as any magician will tell you, timing is everything. This one arrives just when we need it.