Pet Semetary is a remake of the 1989 film based upon the original, 1983 novel by Stephen King. Movies based upon the works of Stephen King have been a mixed bag over the years with a few hits, a few disasters, and a lot falling squarely into the category of ordinary. The 1989 film is definitely one that falls into ordinary. Not a bad film but not a classic. We’ve been on the second wave of King films now for some time as we’ve already had remakes of The Shining, Carrie, Children of the Corn, and Salem’s Lot. In fact…don’t look now but after two made-for-TV movies based on Salem’s Lot there is now a big screen version in the works. 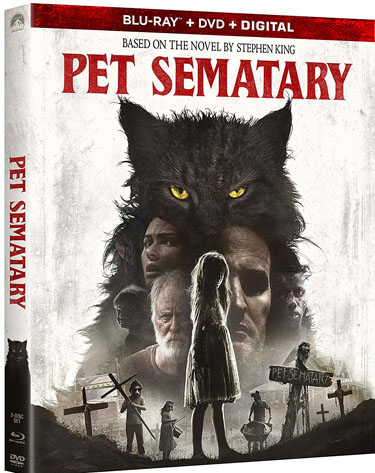 Jason Clarke and Amy Seimetz star as Louis and Rachel Creed, who relocate their family including daughter Ellie and son, Gage, from Boston to rural Maine. Louis is a doctor working at a local hospital and soon deals with a traumatic accident in which a young man named Victor Pascow is killed. Louis is terrified when he has visions of the gruesome Pascow warning him to stay away from a local pet cemetery located on his property.

They meet their neighbor, Jud (Lithgow) an old man who has lived in the town his entire life. Jud fills in Louis on the myths and legends of the nearby cemetery. When the family cat, Church, is killed, Jud leads Louis to a secret area beyond the cemetery and instructs him to bury the cat. Miraculously, Church returns alive but very different. He is meaner and more feral than before. Jud confesses that the same thing happened to his dog when he was a kid. When Ellie is killed by a truck, Jud warns Louis against doing anything rash and that “sometimes, dead is better.”

This version of the King story in some ways is more faithful to King’s story than the original film but also deviates quite sharply from the source material. The first most obvious change is that it is Ellie, and not younger son Gage, who is killed and brought back to life. This change seems to be for no good reason other than just for the sake of change. The toddler getting killed and reanimated is far more tragic and terrifying than that of the older child.

The subplot of Rachel’s terrifying childhood and flashbacks of her caring for her ailing sister get played out far more than needed. I honestly cannot remember this from the original film although it was in King’s story. It comes off as unnecessary padding of the film. Another deviation is in Jud’s relating to Louis what happened the last time a human was buried in the secret area beyond the pet cemetery (although this IS included in the extras). The ending is also needlessly changed and not for the better. It is short on scares and long on talking…lots and lots of talking.

The performances are fair. I like Jason Clarke but Amy Seimetz gave a forgettable and whiny performance as Rachel. As much as I like John Lithgow I much preferred Fred Gwynne’s folksier take on Jud in the original film.

This film does some things better and some things worse than the original but in the final analysis, it is still just ordinary.

Beyond the Deadfall (62:00): A set of four featurettes looking into various aspects of the production, such as adapting the original novel for contemporary audiences, the production design and shooting locations, the casting and characters.