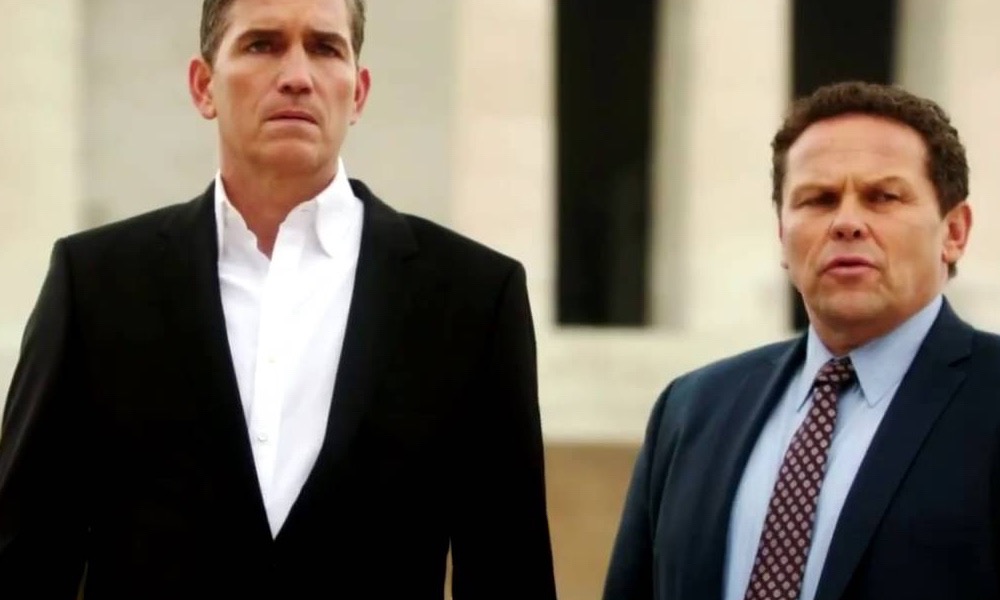 As the series climax nears, a story that divides its time between tense action, and the ideas this show is all about, as some old cases make a surprising return to the show.

Synecdoche: a figure of speech in which a part is made to represent the whole or vice versa., and that’s what this week’s chapter does, it more or less encapsulates the best features of the entire series in one episode.

The episode begins with a rainy day in a cemetery, Reese and Fusco are saying goodbye to Root, aka Samantha Groves. She is being buried under an alias, because of Samaritan. They are the only ones there. Finch is still missing, and Shaw is still struggling with what is real and what isn’t. Fusco sums the scene up when he utters the words ‘So long Coco Puffs’

Next, we find Finch on a roadside in Kentucky, where the car he has stolen after he made his escape from prison is having some sort of mechanical problem. he is having a conversation with the Machine, who now sounds like Root. This scene and others in the episode goes a long way in giving us insight into how his relationship with his creation has changed. There are no more brief messages on a digital chalkboard, their conversations now are more like a discourse between two people.

The machine explains why it chose to sound like Root because after doing so many bad things, she changed and her life and became a force for good in the world. The machine also tells Harold he taught it how to love. The AI is more human than Harold has ever understood it to be. Having Root’s voice has ben revealing as to the true nature of Finch’s creation. These final episodes are clearing up a lot of questions about the Machine, this show and providing some answers for them too, and doing it beautifully.

When a local sheriff pulls up and begins to question Finch, who due to his recent circumstances, has no ID, the Machine quickly creates information of the sheriff’s computer, clearing the way for Harold to leave with no further problems. It’s revealed he’s on the way to Texas, but we are not informed why, and indeed it’s not clear if he really knows beyond getting away from the forces of Samaritan and being in prison.

Back in NY Reeses is approaching Shaw about coming back into the fold and helping to find Finch. Shaw is hanging out in a park out of sight of Samaritan. Shaw is still unstable and begins to freak out a little, Sha has had enough, and wants to get down to the business of fighting Samaritan. She exposes herself to the nearest security camera in the park where they are, daring Samaritan to come and get her. She is done with pussyfooting around.

This episode shows us the dark side of Sameen. She is in mourning for Root and her anger is apparent. Shahi does a great job portraying this scary aspect of her character who so often throughout the series, despite her lethal abilities, has often been the source of some the show’s most amusing moments. It seems Shaw has finally lost her appetite and has not been portrayed lately constantly eating like a feral animal.

Just as she does this a nearby phone rings and it’s the Machine with a new number, but this number is different, it’s in a code Reese doesn’t recognize, but Shaw does, it refers to the President of the United Staes. At that moment a car pulls up, and Shaw, thinking its agents of the evil AI, defiantly invites them to come get her, but to her surprise it’s a man who simply hands her an envelope. Its ID and an invitation to an event where the president is speaking later that night. A message from the machine. The die is cast, team machine has a new case, it’s to save the life of the President.

Meanwhile, in a cafe somewhere on the way to where he’s going, Harold and the Machine are deep in discourse about what to do next. It’s more like he’s having a conversation with Root. This is the exchange of engaging, philosophical ideas this show has always been about, and this time it’s about the best approach to take next, and Harold finally has to admit to himself that maybe it’s time to change tactics, and as he leaves the quiet little roadside cafe, he seems determined to do just that.

Meanwhile, the rest of the team has traveled to DC as part of their plan to figure out, and help prevent, what’s going on to place the life of the president in danger. They find their way into the event where the president is speaking, and just as Reese is running into trouble getting in, an old acquaintance arrives in the person of Logan Pierce (Jimmi Simpson) the millionaire computer whiz who was an earlier person of interest, that was clever enough to figure out Reese and Finch’s secret. Reese uses his arrival to gain entry into the party.

Pierce cryptically tells Reese he has a new occupation in life and walks away just before the action begins, and Reese spots him afterward looking a bit suspicious with a smile on his face. I doubt I was the only viewer to suspect this might be a red herring, and that is what it was.

Scanning the surroundings of the event Reese finds a bomb hidden in a brick wall, and he and Shaw dispose of it before it goes off, just as the president is arriving. The president escapes. A message appears on a tv monitor at the event, and a lot of other places, saying this was just a warning, and the mass surveillance being conducted by the government on the country’s citizens must end by the next day or the president will die.

Shaw and Reese grab a waiter who looks suspicious and kidnaps him. He feigns innocence until Shaw starts to play rough, using electric shocks and threats to visit his family unless he comes clean, so he confesses he is involved, They allow him to escape so he will lead them back to his friends, which he obliges by doing just that. Shaw and Fusco arrive at his destination right behind him, and Shaw enters the place only to find she was expected, and its a trap.

She is surrounded by gun-toting members of this radical group who it turns out is another version of anti-surveillance fanatics similar to what we have seen in this series before. It’s Shaw though, and there’s little reason for concern, She’s ready when the lights suddenly go out and turns the tables on her captors. She and Fusco find out the plan to kill the president and where it will take place, but still, don’t know how it will be done.

Reese goes to where the president is supposed to make an appearance, and he can’t shake the feeling he’s being watched while all this is going on. He’s surprised by the appearance of a former person of interest, a soldier whose life he saved from an earlier case, Joey Durban (James Carpinello), who invites him to go have a drink, but Reese declines, saying he is too busy.

They figure out the plan is to use a drone to kill the Potus, and Shaw,  using a rifle she took from a police sniper on a rooftop, uses it to warn the president and the people with him they are in danger, she uses her skill to keep them pinned down until the drone arrives and destroys the cars they are attempting to escape to. I had suspicions this might actually be a plan by Samaritan to use Shaw to kill the president, and that may be what the show’s creator’s wanted us to think, but I was relieved to find that was not the case.

She and Reese are now trapped by gunfire on the rooftop where she was shooting from, mistakenly taken to be snipers who were attempting to kill the president, and when they try to leave the building they are caught, but escape, from some authorities on the way. They are caught a second time, and this time it seems they will not get away, until someone shoots their captors in the knees, Reese style, so they can escape. It’s Reese’s friend from the past, Joey, who just happens to have some disguises so they can blend in and get away.

Afterward, in a very surprising development, it’s revealed that Pierce, and Joey, along with another former person of interest Harper Rose (Annie Ilonzeh) the con-woman they had dealings with before, have joined forces and formed their own team Machine, and the Machine gave them Reese’s number. While Reese and the gang were dealing with their problem, Pierce’s team was devising an exit strategy for Reese’s team, and watching over them.

This is a huge development, and a pleasant surprise, that may have repercussions ahead. With more pieces on the chessboard, now we have to wonder who will survive from the two teams, and what effect will they have on the story going forward, and how many more teams like this are there anyway? The Machine has been busy behind the scenes. It also serves as a beacon of hope for the future, if the original team Machine doesn’t survive, will this one continue in its place? It’s a sign of hope for the future as this team carries the torch lit by Reese, Finch, and the others.

Meanwhile, we find Harold in a roomful of servers downloading some data. There are unconscious people scattered around. We are left to imagine what the Machine did to help Finch in this situation because it’s not likely he did all this himself. Finch and the machine are having a conversation, about what Finch is doing. Apparently, he has gotten his hands on a virus that will prove deadly to Samaritan, but the Machine/Root’s voice warns him it might have disastrous results and lots of people might die. Finch is determined and says he knows what he has to do as the episode ends. Cliffhanger much?

The episode also had the result of reinvigorating Shaw, who seemed back to her old self after their adventure. It’s good to see Shaw’s back on her game. With only two episodes left the sky’s the limit, and all bets are off for what the final episodes have in store for our friends in the final showdown with the forces of Samaritan, determining who will survive and who won’t. I know it won’t be boring. Great stuff from a series that’s been consistently great all along. [review]