Edgar Rice Burroughs is best known as the creator of Tarzan, Lord of the Jungle, and John Carter, Warlord of Mars. But another of Burroughs’ popular series is his tale of the Hollow Earth land of Pellucidar, created in the 1914 novel “At the Earth’s Core” and continuing over several more novels. This prehistoric land hidden deep within the bowels of the Earth was populated by primitive civilizations and prehistoric creatures, including dinosaurs and a species of intelligent flying reptiles resembling with vast psychic powers. The series even crossed over with Tarzan in “Tarzan at the Earth’s Core” (1929).

Over the years Pellucidar has been adapted in films, Television, animated series, and comic books. Today, the Pellucidar series is still going strong via an online comic strip on the Edgar Rice Burroughs website. 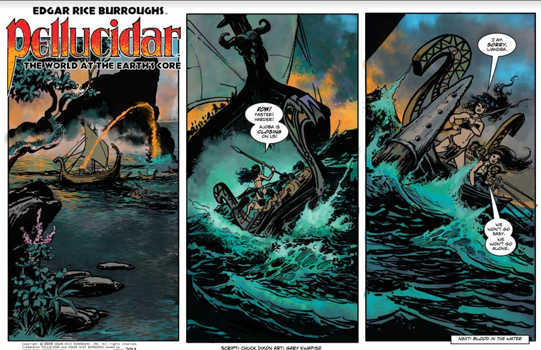 When David Innes and Abner Perry build a revolutionary mining machine, their plan is to uncover vast mineral deposits far beneath the surface of the earth. But, on the “Iron Mole’s” first trip, they find themselves hurtling toward the center of the earth where death from the Earth’s molten mass of white-hot magma seems certain.

Instead, what Innes and Perry discover is that the earth’s crust is only 500 miles thick with an inner surface — and its inhabited! In Pellucidar, dinosaurs roam through jungles and saber-toothed tigers hunt mastodon and mammoth. A tiny sun, the molten core of the Earth, hangs in the center of the heavens, shedding perpetual daylight upon Pellucidar. Because the sun never sets, it is always “now” and there is no such thing as time. Stranger still, because Pellucidar rests on the inner side of the Earth’s crust, there is no horizon. The land curves upwards, as if you were standing on the inside of a gigantic bowl.

Humans dwell in Pellucidar — stone-age men and women who must fight to survive in this savage world. Even worse these humans have been made slaves of the Mahars, a race of intelligent but sinister reptiles who look upon humans as nothing more than beasts of burden or tasty snacks in one of their ghoulish ceremonies. 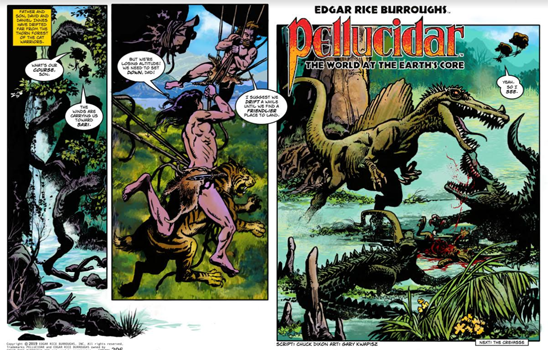 Pellucidar is written by Chuck Dixon. Dixon has been writing comics for over 35 years and his long list of credits include: Marvel’s various Punisher titles, Marc Spector: Moonknight, Airboy, Savage Sword of Conan, Detective Comics (where he co-created the villain known as Bane), Birds of Prey, The Simpson, Numerous Batman mini-series, Alien Legion, and Nightwing, to name just a few.

The art of the strip is handled by veteran Gary Kwapisz who has worked for both Marvel and DC on titles such as Savage Sword of Conan, Punisher War Journal, Hawkworld, and Marvel Comics Presents…

Check out the sample pages! 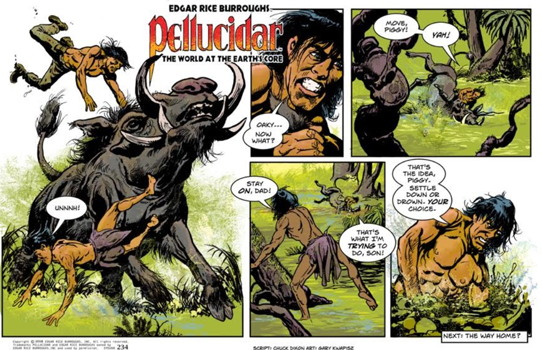 You can subscribe to Pellucidar as well as several other ongoing strips based upon Burroughs work by visiting the following link: https://www.edgarriceburroughs.com/comics/

Definitely well worth it!