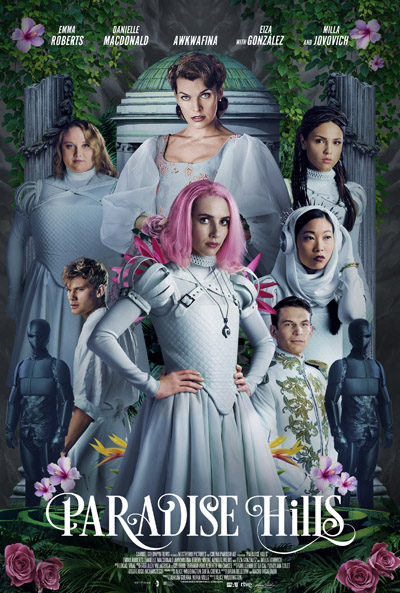 When you blend ideas together, even ideas from critical and commercial failures, you can sometimes come out the other end with something fresh and compelling. At best the old influences may be forgotten in the glorious light of the new gestalt creation.

Worst case scenario however, the specter of exemplars past can loom large and overshadow the fledgling before it can get many steps out the door.Paradise Hills is a million influences struggling to be something new and an ultimate premise so dusty and obvious none of it is able to be taken seriously, no matter how much it wants to be.
If you guessed a movie about an immaculate and cultish therapeutic retreat where everyone dresses up like fairytale royalty and a regime of daily improvements balanced with constant doses of mind control MIGHT have a big creepy twist and some kind of blatant social commentary screed congratulations…you’ve seen a movie or two, or at least read a young adult novel.

That’s what Paradise Hills feels like: a YA novella adapted into a film. The kind of second-tier high-concept production that would get green-lit after the success of a similar story trying to borrow the hype. This is Maze Runner or Divergent compared to The Hunger Games.

I mentioned that Paradise Hills is haunted by similarities to other concepts. Suckerpunch of all things is high on the list: a film basically remembered today for being a financial flop and not well reviewed. We’ve got the silly leather costumes, the seraphic brothel/asylum, Alice in Wonderland references galore, feminist overtones, a diverse cast of troubled young independent women, and unnecessary surgery. Hunger Games itself is brushed on with ridiculously dressed extreme upper class twits parading around elaborately dressed sacrificial children from lower class family’s sent to be used for the amusement of the masses and vaguely magical super technology that goes barely explained.

Someone must have been a huge fan of Suspiria too judging by the diaphanous curtains, sterile murals, harsh primary color lighting and juxtaposition of extreme discipline and manners with suppressed rage and secrets. The relatively recent box office bomb A Cure For Wellness could literally be a higher budget prequel to Paradise Hills given how close the two are aesthetically, and both squander an intriguing and marvelous locale on a really dumb and convoluted mystery plot.

By all means, mix your drinks, but you’ve got to bring something new to the bar. Paradise Hills isn’t saying anything new, it’s derivative in style and characterization and the messages of ‘don’t let people change you’ and ‘wealthy people are all evil’ aren’t exactly difficult to find in media.The place where the film does zag into insanity is almost worth the ride.

The ‘twist’ I was expecting from the get-go so it wasn’t a surprise when they had the big exposition scene to wrap-up the non-mystery, but what they came up with to explain everything was so utterly bafflingly boneheaded and had so little to do with the previous movie to the point that it created gaping plot-holes I will admit to being surprised and agog. Almost impressed. How someone could decide to have the big reveal retroactively tear down the premise intentionally I have no notion. But by the time I was reeling from that breaking of logic, Milla Jovoich did something so ludicrous I was floored all over again.

Would I recommend this film? In the same way I’d recommend SuckerPunch or A Cure For Wellness honestly. You don’t experience movies like these: you marvel at the wasted money and talent used to bring about something so collectively bonkers it’s nearly worth the price of admission all over again.
I imagine some people will champion the message, but even they might be extremely confused by some of the choices made here. It ceases to be a metaphor and mutates into a freak show.

Someone put a lot of ego into this as it plays out a lot like a power fantasy in many ways, but there’s no humility without humiliation and this will be a hard one to look back on with pride if someone stop looking at all the pretty sets and costumes and listens to the awful dialogue.

If you’re in for a gaudy pileup, this is one of the more interesting ones to come along in awhile.
Millia at least seems to be having a blast.