Overlord (2018) shows promise in its official trailer, the trailer set to the strident sounds of AC/DC’s “Hell’s Bells.”  And what it promises is “chaos,” “fear,” “insanity,” “havoc,” “horror,” “evil,” “madness,” “terror,” and “rage” in a video game/comic book movie not based on either a video game or a comic book.  It promises a good (but not great) genre mashup movie—a WW2 action/horror movie—built upon the pulpy premise of Nazi zombies and filled with glorious gore and over-the-top action.  And the movie delivers on that promise …

But in its first 11 minutes Overlord actually exceeds the expectations created by its official trailer.

The movie begins by effectively, economically, and entertainingly establishing its characters and their mission as they fly to their destination in the Normandy region of France.  Snippets of speeches by Winston Churchill, Adolf Hitler, and Dwight Eisenhower over snippets of WW2 newsreel footage segue smoothly into American planes and boats traversing the Atlantic Ocean—including a troop plane carrying a squad of American paratroopers—on the eve of D-Day.  The paratroopers, via their conversation, reveal themselves to be stock WW2 fictional characters and their mission to be the taking out of a radio-jamming tower on top of a church in the town of Ciel Blanc.  If it isn’t down by 06:00 on D-Day then air support for Operation Overlord won’t make it through Nazi defenses.

Unfortunately, their own plane doesn’t make it through Nazi defenses, and they must jump from it as it’s being shredded by anti-aircraft fire.  And even more unfortunately, the rest of the movie lacks the phantasmagorical delight of the opening, which climaxes with a paratrooper tumbling (along with other paratroopers) through a nighttime aerial hell of searchlights, tracer fire, and burning and exploding aircraft, then plunging into the ocean, and then desperately rising to its surface where he has to cut his way through his own parachute like an en caul birth baby emerging from the amniotic sac.  The climax of the superb opening section is the climax of the entire movie: Overlord loses its dramatic momentum soon afterward and never quite regains it. 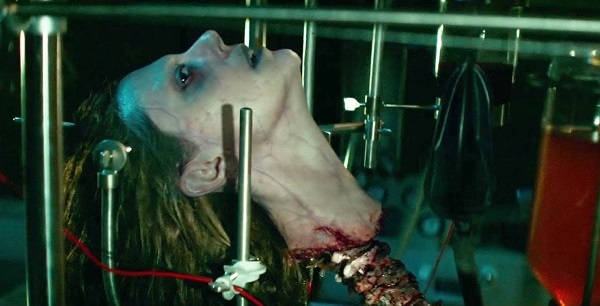 It never quite regains it despite the paratroopers’ mission being a race against the clock and gaining another objective with the discovery of Nazis’ medical experiments on town residents and fallen soldiers.  It turns out that there’s a reservoir of a mysterious tar beneath the centuries-old French church and that the Nazis turned the church’s basement into a lab in which they pump the tar out of a pit, distill it through living human bodies into a red serum that can reanimate and mutate the dead, and experiment with it on animals and humans.  “A thousand-year army needs thousand-year soldiers,” and the program is to provide them.  So the paratroopers have to destroy the church’s lab as well as its radio-jamming tower, but there’s no feeling of raised stakes to the former or sense of urgency to the latter.

When the surviving paratroopers regroup after landing outside Ciel Blanc they have only a few hours to take down the tower, but there’s no feeling of time running out.  The discovery of the Nazi supersoldier program doesn’t seem like much of a revelation, neither to the characters nor to the audience; and the zombie aspect of the story doesn’t really pay off.  And the final battle, the losing of which would’ve been catastrophic for the Allies, feels almost perfunctory.  In spite of its bold and dynamic directing, lusciously lurid visuals, goodly gore, and viciously visceral background score, Overlord—after its first 11 minutes—feels fairly restrained.  It has the “fear,” “havoc,” “horror,” “evil,” and “rage” but not the “chaos,” “insanity,” “madness,” and “terror” promised by its official trailer. 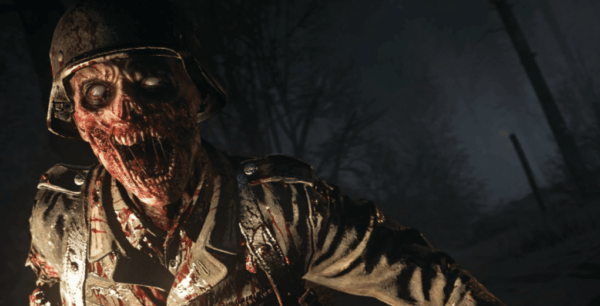 And something else the movie doesn’t have is fun.  It not only doesn’t go over the top but also takes itself, its near-farcical B-movie premise, and its amalgam of clichés and swipes far too seriously.  Its story has a simple, predictable idiot plot and almost no humor.  It treats the Nazis’ zombie/supersoldier program as if it were an actual instance of their medical experimentation upon human subjects instead of as the surreal pulp story concept it is.  And although the story seems to have been pieced together like Frankenstein’s monster from elements from other movies, it neither puts a new twist on them to make them fresh nor provides parody or ironic hipness to qualify them as homages rather than ripoffs.  So what Overlord needed more than anything else was to be “tarantinoed.”

In fact, the movie’s Nazis—even “the evil SS officer” Wafner (Pilou Asbæk) and “the mad scientist” Dr. Schmidt (Erich Redman)—are less movie characters than figures in a Castle Wolfenstein-esque video game.  So there’s little audience satisfaction in their demises, even though they’re shown as cold-blooded murderers, medical torturers, nonconsensual cunnilinguists, and baseball spitters.  This one-dimensional view of the Nazis is stated explicitly along with the movie’s theme in the beginning: “[T]he Nazis are rotten sons of bitches [who] will do anything they have to to destroy everything that is good in this world!  That is why we have to be just as rotten as they are!”  But the borderline good Overlord handles Nietzsche’s “Whoever fights monsters” maxim like all its other elements: superficially.