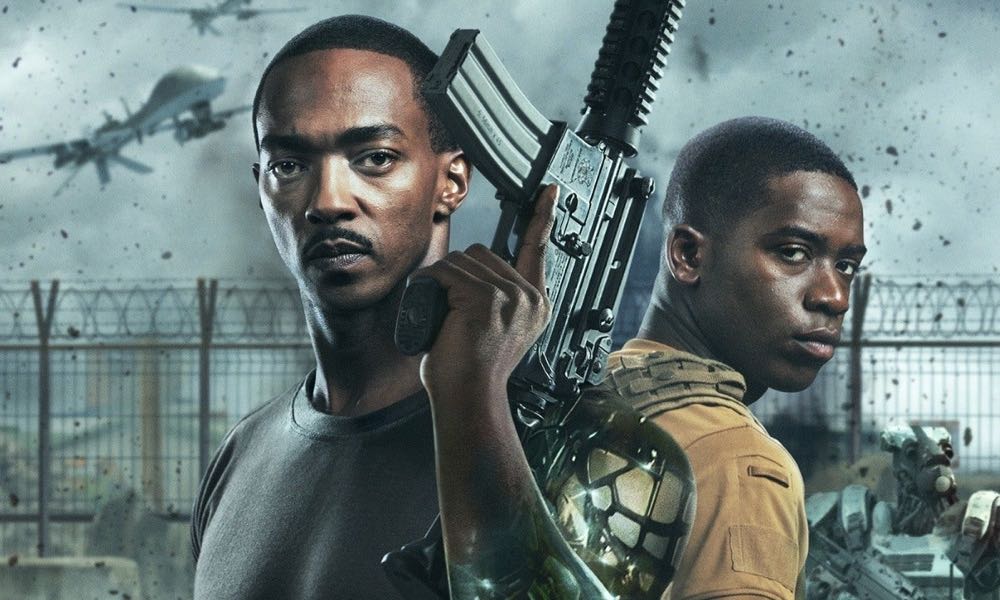 I spent part of my evening last night watching Outside The Wire without knowing at all what to expect, and what I got was an action-adventure with science fiction elements. In a world where half the movies made are action thrillers, in that regard, this film holds its own. The story this movie tells is not exactly a new one; It’s a variation on the missing Russian nukes story that has been spinning around for a few decades involving codes that might give nuclear access to terrorists. This film differs in its portrayal of the military’s technology in wide use. Outside The Wire portrays a vision of war in the near future; it’s a mish-mash of old school and high-tech. Armed forces that, beyond the drones and other tools of the trade, make liberal use of semi-autonomous robots that are basically walking humanoid weapons platforms that are pretty intimidating and scary.

Outside The Wire starts by introducing one of its main characters, a drone pilot known as Harp (Damson Idris) that disobeys a direct order and must learn his lesson the hard way by seeing his work up close in the war zone he previously bombed from afar. He meets the film’s other main character known as Leo (Anthony Mackie), who it turns out is a no-nonsense, hard-ass tutor setting up a training day rapport between the two, which quickly goes sideways because Leo is quickly revealed to be an Ai android prototype, in other words, he’s a super-soldier and a total bad-ass with n agenda of his own. The film’s message is a reminder that war is hell no matter your perspective.

In case you are not familiar with this title, Outside the Wire is a 2021 American science fiction film directed by Mikael Håfström. It stars Anthony Mackie (who also serves as a producer on the film) as an android officer who works with a drone pilot (Damson Idris) to stop a global catastrophe. Emily Beecham, Michael Kelly, and Pilou Asbæk also star. Netflix released the film on January 15, 2021. The supporting cast does its job well enough and includes Michael Kelly, one of my favorite character actors, as the requisite tough commander. The film keeps most of its focus on its two leads and how their relationship evolves. Both leads do well and carry the film on their backs for the most part.

The film sets up and maintains a fairly rapid pace, and as one might expect, there are chase scenes, lots of gunplay, and hand-to-hand combat. If you are looking for an action-packed adventure with some impressive fight choreography and gunplay, this is a movie you will enjoy. Mackie makes an impression as a super-soldier, he doesn’t always look like an action figure to me, but the guy stays in excellent shape and does well in physical roles. There is one gun battle involving both robots and humans that is truly impressive and memorable. However, there are points in the film where exposition in the form of dialogue makes the film sometimes briefly seem too talky. There is a lengthy debate between the two main characters about accepting a few losses to save the many and make sacrifices for the greater good. Outside The Wire seems determined to justify its existence beyond the action by telling a more complex story and then explaining itself.

This is not great movie-making, but it’s better than what you can see on commercial television, and overall, for the most part, I found this film pretty enjoyable for what it is, which is a pretty entertaining actioner that doesn’t really have too much to say beyond that.