The anthology film, specifically the horror theme anthology, film has seen a minor resurgence in popularity recently. Grindhouse comes to mind as well as the VHS and ABCs of Death Series, some writers which contributed to Nightmare Cinema itself. Before these there was The Twilight Zone (show and film), Creepshow, Tales from the Darkside, and of course most famously Tales from the Crypt, each united by a wraparound narrative about telling or witnessing stories. This sets up self-contained short episodic tales, sometimes of wildly divergent genres and tones. 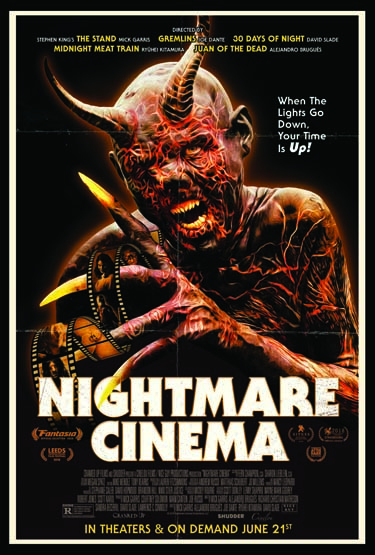 Given the emphasis on twists, practical effects, and classic actors, Nigthmare Cinema is a love letter to all things horror and anthology. We’ve got the slasher flick present and accounted for, the body horror story, the exorcism yarn, creatures from outer space, zombies, psychological horror, and a surprising amount of productions veering between straight up adaptations of past films and poking fun at conventions with self-referential humor. We’ve even got guitar riffs in the soundtrack, unrealistically harsh lighting, and a little too enthusiastic acting from the cast which would not seem out of place in earlier anthologies. To be fair how can you not be a goofball when you have to recite some of this corny or ridiculous dialogue. Writing is the real stumbling point in an otherwise polished show.

The gore looks great. The monsters are inventive. Everyone on screen films seized up in the spookiness but also having a great time doing the sort of wacky things other films just wouldn’t allow. Mickey Rourke especially is fun to see playing his role of The Projectionist to the hilt.

The problems arise only if you start wanting satisfaction in a narrative sense. The wraparound story featuring a theater basically peters out and feels more like an excuse than a fully formed plot. Each individual story has the same issue a lot of episodic stories do: they have to abruptly but concisely conclude to give way to the next in the parade. Some of the shorts are predictable, some clever, some conclude so suddenly they feel more like the screenplay printer ran out of ink.

Collectively, unfortunately, is the feel of a majority of the time and effort paid to make things look good and feel nostalgic rather than making much sense or having much of an arc.
I’m guessing a majority of choices made here were for the sake of being shocking and controversial, but we are WELL past the era when any of this kind of thing would raise any eyebrows, let alone garner outrage. These are the safest controversies you can have in this day and age: excessive blood, religious imagery in questionable situations, nudity, swearing children…

This is the kind of thing you can see on daytime television nowadays. It might be a lot to ask for every story to feel complete and maybe have more of a point than splattering blood and showing some cool visuals, but is it too much to ask for one story to do so?

Every little outing is delightful at an ironic distance as a nice showcase of special effects and cinematography. Everyone had an excellent time making this you get the impression. It feels wrong in a way to rain on the fun, but I for one wish that all this time, money, and effort had gone into doing more than making pale imitations of films that were not intentionally cheap looking for their time and if they were intentionally trashy tended to be forgotten.

In much the same way Nightmare Cinema is probably destined to be. For all the cast with clout, up and coming directors/writers involved, and some very enjoyable beats, there is nothing here fans of horror haven’t seen before done better and none of it hangs together thanks to very subpar writing. Individually, each episode is amusing but rote. Collectively it feels like something that congealed because they needed to have something to connect a bunch of unrelated short films rather than that there was a cohesive vision from the off.

It feels more like a top quality knock-off at best, an extravagant television episode at its worst. If only there’d be the spark to bring this collection of enthusiasm to more life than glorified fan fiction.