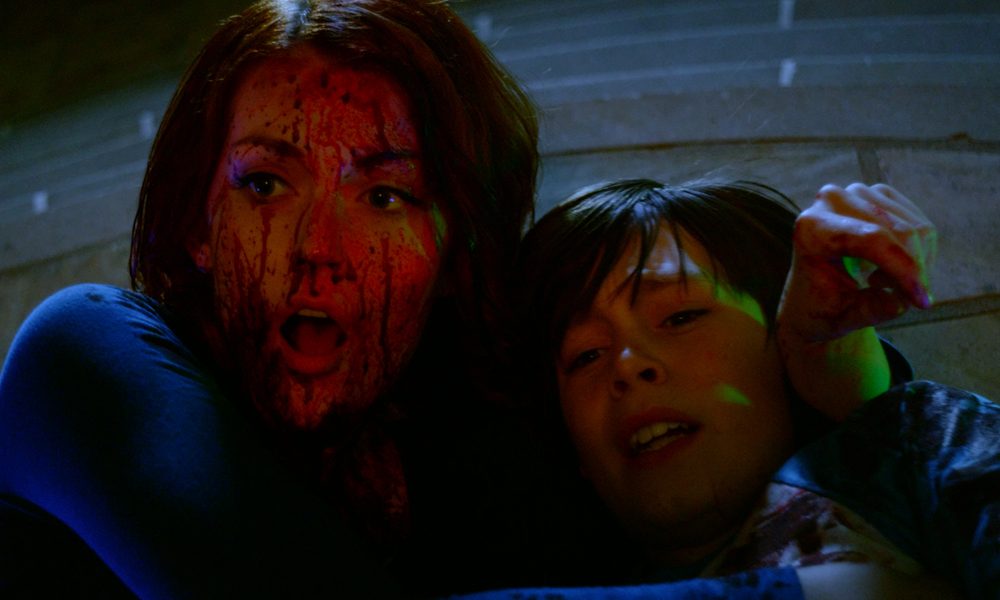 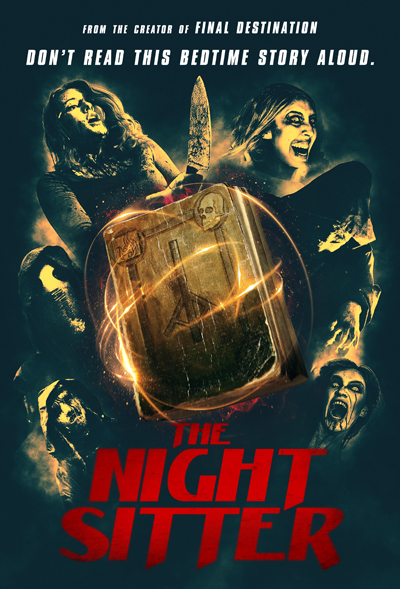 Eighties is the new hotness in terms of styles to replicate. The synth score, the unapologetic style, the saturated colors from a simpler time where the focus of cinema fell on mood and emotion over an uphill battle to be relevant to a fleeting zeitgeist or not stepping on the toes of censors. Night Sitter proudly bills itself as a throwback attempt to replicate the experience of a classic horror film in aesthetic, from the nostalgic throbbing score to the use of deep and stark colors and the type face. Everything down to the poster sells this production as a feature meant to tickle fond memories of a bygone era of midnight movies.

How far the dedication to recreating an era is up for debate. The technology of the film is pretty modern (flat screen TVs, remote control smart rooms…etc) but the acting seems a little overplayed. Is this perhaps on purpose to emulate what was seen as a more extravagant time…or is it just that the amateur cast trying a little too hard? What is intentional parody/homage here and what is just good old fashioned bad acting, cheap directing? Is the ghost show within a show supposed to look like a slapped together zero budget photoshop/after effects YouTube video…or is that really what it is? Someone later comments that the show was ‘professionally produced’. Was this another joke?
It feels too earnest for parody and has more of the clumsy charm of an unintentional learning experience.

There’s passion here obviously from some of the silly and heartfelt dialogue to the obvious care that went into the clashing lighting especially. The craft unfortunately is harder to detect. One of the things that defined the 80s wasn’t just garish colors and foul language for kids, it was creative camera use, making up for a small budget with flair and artistry. Here the cinematography is ‘point the camera at what is the subject of the scene’. Nothing fancier. It looks like a television film, which isn’t terrible quality-wise but it’s not so evocative of 80s horror cinema as much as it looks like an episode of a situation comedy spoofing 80s horror movies.

Despite the frequent profanities and a bit of nudity and gore, there’s a strange naivety to Night Sitter. The younger actors are fully committed to the most awkward dialogue, and sometimes the odd blending of modern slang and older slang so verges on goofy it makes sense their performances would be a little exaggerated. The music is so intentionally riffing on other earlier horror scores its like a tribute album. Even the central concept of ‘Three Mothers’ is a direct reference to Dario Argento’s most famous horror films (probably also explains the use of Giallo lighting in the movie too) and the use of stop motion and a creepy book in one scene could not be closer to Evil Dead without Sam Raimi being involved.

Imitation is the sincerest form of flattery, but something that wears it’s heart on its sleeve so blatantly is either asking for unfavorable comparisons or simply cannot expect to be taken entirely seriously, especially when so much of the cast seems less horrified and more excited to be in a movie.

This is where the virtue of likability comes in. None of the cast are particularly ‘good’ actors in a traditional sense of conveying genuine emotions, but they’re all extremely fun to watch at work. Everyone is pouring themselves into the tiniest scenes and you get the impression everyone involved likes everyone else and are having a blast with this gig. Even during sequences where the characters should really look pained or frightened or sad they keep grinning so broadly and seem about to break out laughing. It’s not effective dramatically, but it’s quite adorable: like watching high schoolers putting on a larger than usual fan film production.

If this was an intentional play on how disproportionate acting can be in earlier or lower budget films, it’s still a little too broad to be effective. But as something genuinely entertaining to watch it’s by no means a drag.
The effects work is…fine. There’s a real attempt to minimize the digital look to some of the computer effects and a lot of work is done practically which is a pleasant change from a lot of contemporary B-movies. It’s one of those films that somehow contains copious blood and guts but keeps you smiling because of how blissfully unaware of its own ridiculousness the picture seems. You could almost recommend this to children with a bit of editing given the surprisingly upbeat and mischievous moments and even genuine life lessons thrown in.

Night Sitter is so charged with wholehearted devotion and sincerity it leaves you feeling good. Is it a success as a horror film? Not really: it’s hardly scary or original or even that effective an 80s homage.
Is it an affectionate effort by a group of friends to recreate nothing more or less than a diverting modern-day drive-in flick with chills and laughs? Most definitely.
Taken seriously it’s hardly a solid experience, but as an experiment and labor of love it’s a gem.