Breach of Containment (A Central Corps Novel)
By Elizabeth Bonesteel

A reluctant hero must prevent war in space and on Earth in this fast-paced military science fiction thriller from the author of The Cold Between and Remnants of Trust—a page-turning hybrid combining the gritty, high-octane thrills of James S. A. Corey and the sociopolitical drama of Ann Leckie 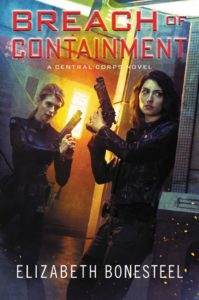 Space is full of the unknown . . . most of it ready to kill you.

When hostilities between factions threaten to explode into a shooting war on the moon of Yakutsk, the two major galactic military powers, Central Corps and PSI, send ships to defuse the situation. But when a strange artifact is discovered, events are set in motion that threaten the entire colonized galaxy—including former Central Corps Commander Elena Shaw.

Now an engineer on a commercial shipping vessel, Elena finds herself drawn into the conflict when she picks up the artifact on Yakutsk—and investigation of it uncovers ties to the massive, corrupt corporation Ellis Systems, whom she’s opposed before. Her safety is further compromised by her former ties to Central Corps—Elena can’t separate herself from her past life and her old ship, the CCSS Galileo.

Before Elena can pursue the artifact’s purpose further, disaster strikes: all communication with the First Sector—including Earth—is lost..The reason becomes apparent when news reaches Elena of a battle fleet, intent on destruction, rapidly approaching Earth. And with communications at sublight levels, there is no way to warn the planet in time.

Armed with crucial intel from a shadowy source and the strange artifact, Elena may be the only one who can stop the fleet, and Ellis, and save Earth. But for this mission there will be no second chances—and no return.

To save her love and unlock the mystery of who she is, a brave young woman must travel between alternate realities in this exciting second book in The Rift Uprising Trilogy. 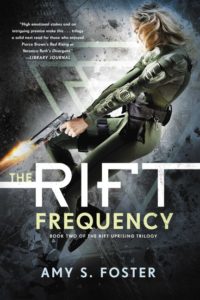 She didn’t mean to, but teenage super-solider Ryn Whittaker started an uprising.

For three years Ryn was stationed at The Battle Ground Rift site—one of the fourteen mysterious and unpredictable tears in the fabric of the universe that serve as doorways to alternate Earths—and then she met Ezra Massad.

Falling in love and becoming a rebel Citadel wasn’t part of Ryn’s life plan, but with Ezra there asking all the right questions, they began to decode what’s really going on, and what they discovered was enough to start a civil war.

When the base explodes with infighting and Ezra gets caught in the fray, he is accidentally pushed through the Rift, taking a stolen laptop—and the answers it could give Ryn—with him.

Now all Ryn wants is to locate Ezra and get back to her Earth. But that’s not easy when she’s traveling the multiverse with Levi, the painfully guarded Citadel who shoved Ezra through in the first place. And Ryn is quickly learning that inside the multiverse there is no normal—it’s adapt, or die—and the one weapon she really needs to win the war back home is the truth.

City of Brass
S. A. Chakraborty

Step into The City of Brass, the spellbinding debut from S. A. Chakraborty—an imaginative alchemy of The Golem and the Jinni, The Grace of Kings, and One Thousand and One Nights, in which the future of a magical Middle Eastern kingdom rests in the hands of a clever and defiant young con artist with miraculous healing gifts. 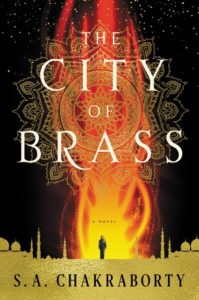 Nahri has never believed in magic. Certainly, she has power; on the streets of 18th century Cairo, she’s a con woman of unsurpassed talent. But she knows better than anyone that the trade she uses to get by—palm readings, zars, healings—are all tricks, sleights of hand, learned skills; a means to the delightful end of swindling Ottoman nobles. But when Nahri accidentally summons an equally sly, darkly mysterious djinn warrior to her side during one of her cons, she’s forced to accept that the magical world she thought only existed in childhood stories is real. For the warrior tells her a new tale: across hot, windswept sands teeming with creatures of fire, and rivers where the mythical marid sleep; past ruins of once-magnificent human metropolises, and mountains where the circling hawks are not what they seem, lies Daevabad, the legendary city of brass?a city to which Nahri is irrevocably bound. In that city, behind gilded brass walls laced with enchantments, behind the six gates of the six djinn tribes, old resentments are simmering. And when Nahri decides to enter this world, she learns that true power is fierce and brutal. That magic cannot shield her from the dangerous web of court politics. That even the cleverest of schemes can have deadly consequences. After all, there is a reason they say be careful what you wish for . . .