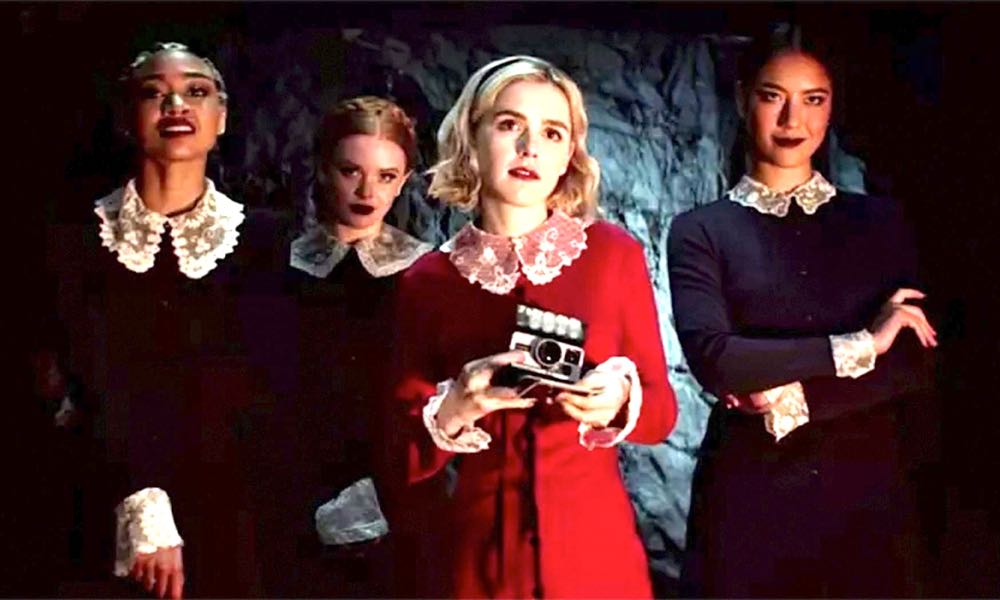 On a whim, a month or two ago I decided to binge-watch the first two seasons Netflix Chilling Adventures Of Sabrina, and to my surprise, it turned out to be far more engaging and enjoyable than I ever expected. All The YA tropes are here, the mean girls at school, etc., but they are depicted in a way that is nicely woven into the show’s narrative without making it seem too much like worn-out cliches, even though that’s exactly what they are, we don’t mind so much. We meet the family friends and classmates of the eponymous character in the idyllic small town with a difference – warlocks and witches are everywhere and magic is commonplace stuff that almost everyone we meet practices on a regular basis.

Like a lot of recent series here is some pandering to the gay and female demographics, but for the most part, the show is a seasonably enjoyable and amusing way to pass some time while we wait for The Mandolorian and other genres stuff coming our way soon. The series also employs lots of humor in its content.

Sabrina the Teenage Witch is a comic book character created a long time ago. her first appearance was published by Archie Comics about the adventures of a fictional American teenager named Sabrina Spellman. Sabrina was created by writer George Gladir and artist Dan DeCarlo and first appeared in Archie’s Madhouse #22 (cover-dated Oct. 1962). Storylines of the character at elementary-school-age also appear under the title “Sabrina — That Cute Little Witch” in almost all of the Little Archie comics.

The series’ premise is that Sabrina, a “half-witch” – her mother is an ordinary human or “mortal” as witches refer to them, while her father is a warlock – lives with her two aunts, Hilda and Zelda Spellman, both witches themselves, in the fictional town of Greendale. The idea for the character was spawned by the popular TV series Bewitched which aired from 1964-1972

Fast forward through several decades and into a new century, and things have changed since the original launch of the enduring YA character through several incarnations including a made for TV movie titled Sabrina The Teenage Witch (1996) immediately followed by a series that aired on ABC and the WB (1996-2003). The most recent edition, Chilling Aventures Of Sabrina on Netflix has more modern sensibilities created to appeal to a modern audience although it stays on the safe side of being a more adult type of entertainment like the material we see more of these days.

The ensemble cast consistent excellent and memorable efforts make this show work well, along with some good writing that mostly strikes a balance between an engaging set of mysteries and YA tropes and a script that even manages to be witty on occasion, an essential requirement for any production.

Kiernan Shipke is terrific as the eternal Doris Day type virgin (even though technically she is not one) who is perkier than should be allowed by law and just as cute, maybe too cute for some, and indeed some may find the approach used in this show too cute as well. The main thrust of the show’s narrative is a  mystery, in fact, mysteries abound and Sabrina is just the detective to solve them by using her intelligence along with her unique ability to think outside the box. The show’s story works to confirm her role as a liberated modern woman who just also happens to be a powerful witch, by her character shaking things up to the point that the way lots of things get done get changed as a result of her meddling, and like the liberated woman she is, Sabrina even rebels against Satan and manages to bring down an entire conspiracy precipitate by one vain man’s ego.

The first ten episodes were released on October 26, 2018. The series has received positive reviews, with critics praising Shipka’s performance, as well as the premise, visuals, and directing. A Christmas special episode was released on December 14, 2018, and the second part of the first season was released on April 5, 2019. In December 2018, Netflix renewed the series for a second season of 16 episodes, which will also be split into two parts.