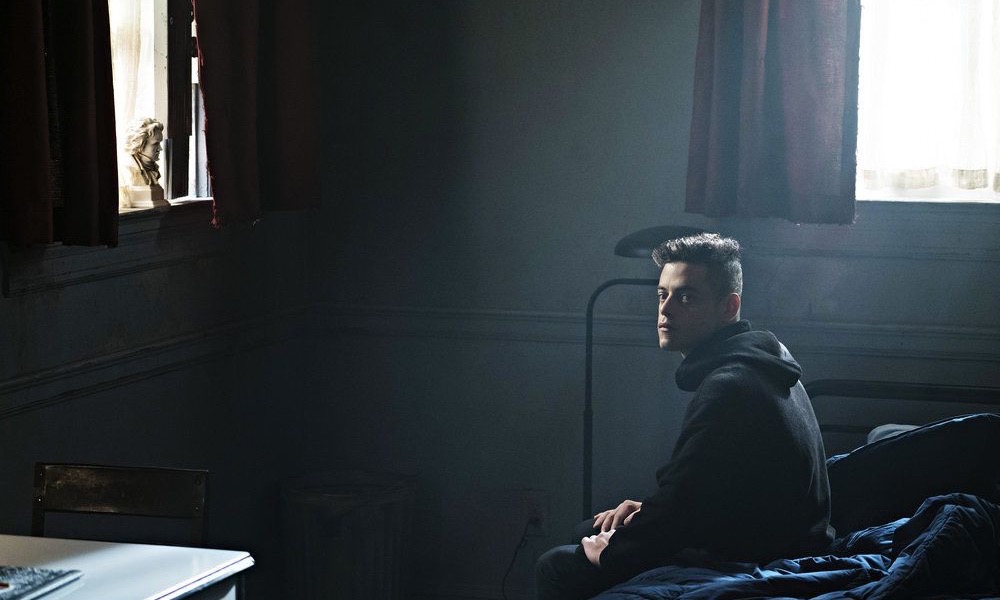 Glimpses of the world show us life after the 5/9 attacks as Elliot’s standoff with Mr Robot comes to a close.

Its uncanny how this series gets me so engaged in what transpires on the screen so completely. My mind is focused on the screen like a laser as soon as it begins, its mesmerizing effects on my brain are unequaled by any other show on tv. I don’t want to blink, in case I miss something, and the real world around me fades into the background while its on. I almost always watch it twice anyway, just in case.

This weekly journey down the rabbit hole is unequaled in its surreal, and fascinating nature, the music the show uses, the sets, the camera work, the characters, what they say and do, and what happens to them each week acts like drug to temporarily assuage the fever in my brain for what’s next for Elliot and the other denizens of his world.

In this episode, the show has begun to segue its focus from Elliot to the outside world, seen through glimpses, allowing it to emerge slowly and more fully after the 5/9 cyberattack. The effect it has had on the lives of people in general, and the the lives of those that are the satellites that orbit the bat-shit crazy hacker’s mind, and the events he was at the center of, and was instrumental in making occur.

The episode begins with a flashback to a Halloween night in the recent past, when Elliot is in his apartment and  there’s knock at the door. Its Darlene, and apparently she has been away for awhile. She wants to hang out because Halloween used to be their thing as she puts it.

What follows is more of the depiction of what occurred before the forming of F-Society. helping to fill in the blanks of what went on before. She shows up wearing the now iconic F-society mask, which it turns out is from a fictitious B horror movie titled ‘Careful Massacre of the Bourgeoise’  worn by the killer in the film. The film looks like a real stinker as bits and pieces of the movie are shown while they watch it, and smoke weed.

During the course of their conversation, their dead dad comes up, and Elliot shows Darlene their father’s old company jacket complete with Mr Robot patch on the chest, that he has stashed in his closet. She asks him to put on the mask, and it seems to transform him. He half jokingly lays out the whole plan of the cyberattack as it occurs to him. This is the moment F-Society and its goals are born.

Also during the course of the conversation, Elliot tells Darlene he just got fired from a job, and he explains why. He  tells her a story about being left in a room full of servers, falling asleep, and when he woke up, this servers were all destroyed. Sounds like the story  of Eliot’s first blackout. He goes to court, for destroying the company’s property, and has to start seeing a shrink, for anger management as a result of this event. he also mentions Angela setting up a possible job at Allsafe, which as we now know, is where he worked next.

The episode transitions to the present with a dramatic flourish of music that reminded me of  the soundtrack from one of Hitchcock’s films. Shots of Darlene on the subway wearing her signature sunglasses, Dr Martins and a short skirt like a poster child for the 90’s. She exits her train, and there’s man at the station that obviously begins following her.

She passes a group of people, one of which turns out to be her ex fiancé, in a  F-Societ mask, who relives her of her phone and throws it away. They are shown soon after in a bar, and after that, having sex in the bar’s restroom, he warns about the FBi having a new surveillance program, something called Bernstein, which comes up again later in the show. The world is now a different place for Darlene and her friends. a world full of paranoia.

Agent DiPierro, and the FBI are all over the location F-Society’s former headquarters which she found at the end of last week’s episode, looking for clues they hope will lead them to perpetrators of the cyberattack.

Meanwhile Wellick’s wife Joanna, makes an appearance in the show a couple of times, first dealing with her boy-toy Derek (Chris Conroy), the bartender, and secondly confronting Scott Knowles, the man whose wife Tyrell killed, and executive at E-corp, who apparently has held up payment of Tyrell’s severance package, which is causing her hardship of the sort she sort she is not used to or enjoys.  This is a decision  I suspect he soon may regret.

BD Wong also appears this time around, as White Rose, his transvestite persona. He is made aware of the FBi’s new program and orders it looked into more thoroughly. This may be the one guy in the show who is as crazy as Elliot.

This tranny hacker bears watching as an important part of the story the series is telling. He is a part of both worlds, he is apparently very wealthy, and also part of the dark web and partially responsible for the hack that nearly brought E-corp down

Angela is still attempting to play both sides of the fence in her job at E-corp, and informant, and is trying to see just how far she can push Price in  terms of payback for her mother’s death at the hands of the company. Her inside info has led to the arrest of a couple more of E-corp employees, but Price seems bullet proof, and when she demands a new office and a promotion, he gently rebuffs her efforts to bully him, signaling her leverage has played itself out.

Elliot visits Ray, and plays chess with him, and Ray who is emerging as a sort of guru for Elliot at this point suggests he take the chessboard and  use it to practice, perhaps learn about himself in the process, and maybe resolve his issues.

Elliot, still in his struggle with his alter ego, is confronted by him in a challenge to play a game for all the marbles, if he wins Mr Robot will go away, and never bother him again,, but losing means Mr Robot takes over, and Elliot’s life basically becomes one long blackout with his later ego at the wheel and Elliot a sleeping passenger.

The chess game for all the marbles trope, is of course, a reference to  the iconic Ingmar Bergman film, The Seventh Seal (1957) in which Max von Sydow plays a game of chess with Death, for his life.

Elliot tells his therapist, Krista, about the challenge for the game, who warns him against it because it would be  agreeing to destroy part of himself. Elliot responds with another great, and passionate soliloquy about his existence, his mental state, and requesting they move on to the part where she helps him. He’s desperate for this mental constipation to end.

There’s also a nice, amusing surreal scene of a fancy diner party taking place in an alley as part of a depiction of Elliot’s perfect world with a lot of the characters we have met along the way, An E-corp building in the background collapses and they all applaud.

Elliot, as a modern day Hamlet, plays several games with his father’s ghost, each time to a stalemate, he finally concedes he can’t win, and that fighting against his alter ego is futile, its as much a part of him as the part he recognizes as his true self.

He returns to Ray’s, and offers to help Ray with his computer problem. The standoff has ended, Elliot is back at a keyboard, and  begins to type, he learns about Romero’s death, the FBi finding his former headquarters, and the surveillance program Bernstein they have, and  the episode ends with him deciding to hack the FBI.

Well it looks like the story is finally going move past the the war with Elliot’s alter ego, which has pretty much been the focus of the the first four episodes of season 2,

It was never boring, but i admit i am relived  the show is finally moving past  the stalemate of Elliot’s struggle with his father’s ghost, and finally, hopefully moving on to what comes next in the story. Can’t wait for the events of next week’s show. One thing’s for sure, it will be interesting and hold some surprises.