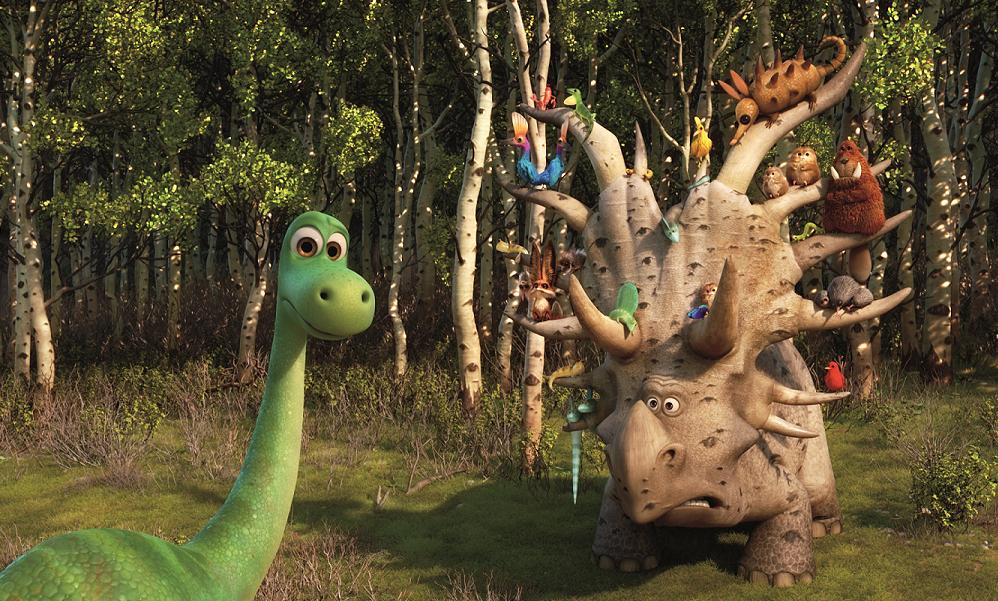 Pixar has seen it share of stumbles over the past five years, and the troubled production history of The Good Dinosaur suggested that this would be the biggest yet. Sandwiched in between the studio’s triumphant return to form with Inside Out and Disney’s upcoming Zootopia, which look very promising indeed, one gets the impression that they wanted to quietly push it into theaters and then pretend it never existed.

That’s why its resounding success comes as such a marvelous surprise. You can see why it would run into so much development trouble, with multiple pieces that don’t necessarily make for a perfect fit. But once you get the basic concept down, it turns into something quite special: the kind of wise and funny look at human nature that the studio has been justly celebrated for.

Admittedly, that concept takes its time to settle in, and you need to exercise a little patience in the early scenes to get to the meat of it all. Imagined as a prehistoric western, it starts with the ideal that the asteroid didn’t kill the dinosaurs 65 million years ago and that the evolved into sentient beings who now seek to tame the savage lands around them, So it is for a family of brontosaurs trying to run ad farm, with their own members as combination farmers and heavy equipment to do the job. Their youngest son Arlo (voiced by Raymond Ochoa) is far too timid to handle life out on his own, but when he finds himself far from home after a disaster, he needs to call upon his untold strength to find his way back.

It’s definitely a Hero’s Journey boilerplate, but with the world itself finally clicking in our heads, it soon finds the sweet spot that we expect in Pixar’s best work. That helps to make the movie an odd sort of buddy picture. Humans have evolved alongside dinosaurs, and while we’re basically a pack of feral mutts — complete with howls and the occasional savaging of the ankles — Arlo soon finds one to act as his post-Cretaceous terrier to guide him on his way. He blames the young boy for getting his father killed too, providing some nice prejudices to overcome as well as some priceless physical comedy to punctuate the adventure.

But the world here is the real name of the game and while the story itself is kind of stock, the canvas it plays out on is something to behold. The animation is stunning, of course, providing vistas of the American Southwest in ways that only Pixar can accomplish. The world design itself is a thing of beauty, positing the dinos as prehistoric frontiersmen without having to pop them in silly hats or six-gun rigs. A big part of The Good Dinosaur’s success comes from the fact that we can’t wait to see what it’s going to show us next, and with the basic thematic content sent in comforting directions, it can show us what’s different about itself without tripping over its own tail.

To it, it adds the same mixture of marvelous characters and quiet insight that mark the studio at its best. We laugh a lot in The Good Dinosaur, but it respects the world enough to play it straight, and just when we think it’s shown us everything it can, it turns around and tugs on our heartstrings in just the right way. The notion of accepting one’s fear, for example, shows a remarkable amount of maturity, as does the concepts of loyalty and family that never feel corny or half-baked in this movie’s hands. (It’s also preceded by a short call Sanjay’s Super Team that ranks as one of the best things that the studio has ever produced.)

That reliance on the things that made the studio great pays big dividends here, guiding us through the lugubrious exposition and into the quietly wonderful space that Pixar used to show us year in and year out. That record had become a little tarnished of late, but the one-two punch of this one and Inside Out marks a triumphant return to form, and considering what this film had to go through to get to the screen, it constitutes a minor miracle. Dinosaurs will always be popular, but this one shows them to us in a strangely fitting way that no one has ever conceived of before. We used to expect that every time and thanks to director Peter Sohn, The Good Dinosaur resolutely fails to disappoint even though it had every justification to.  In that sense, it resembles its wobbly kneed hero in all the right ways, and brings a little ray of joy to the fall movie season that’s all the more welcome for arriving so unexpectedly.