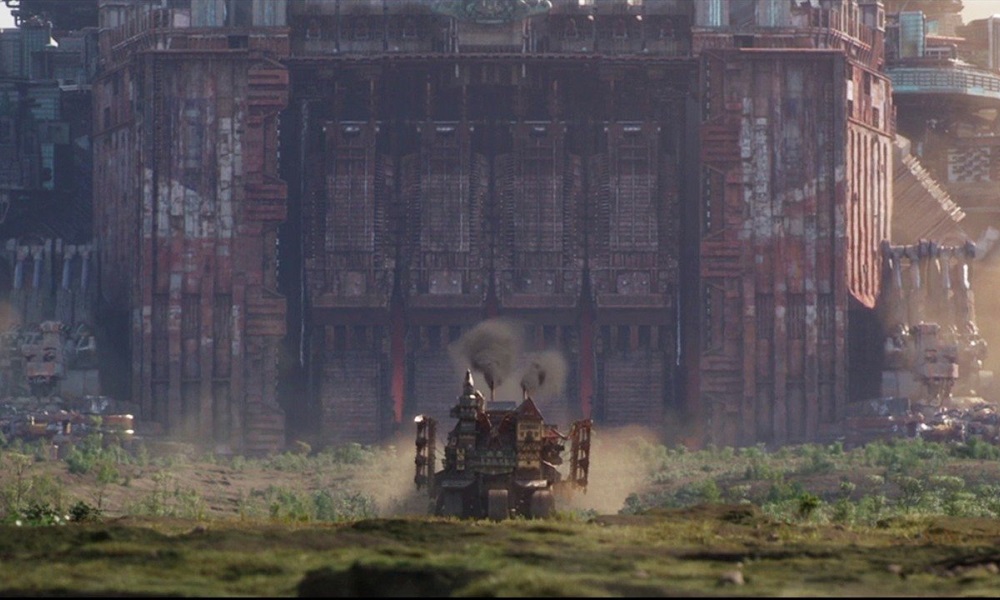 Exposition. To quote Diana Rigg, “it has to go somewhere.” And when you’re dealing with a world as complex as the one on display in Mortal Engines, that’s no small concern. The universe rumbling through the heart of this movie holds a great deal of power, both as an abstract concept and a cinematic landscape brought to impressive life onscreen. But there’s a lot of it, and without a better way of filling us in on the details, all that power goes to an undue amount of waste.

We find ourselves sometime in the future, a thousand years after an upgraded nuclear apocalypse cracked the earth open like an egg. Cities survived by becoming mobile: impossibly huge tanks that roll across a transformed landscape on tracks and give the concept of medieval siege warfare a retro-sci-fi refit. The film opens with a crackerjack scene depicting London – the surviving big gorilla on the block – ruthlessly tracking down a ramshackle village before pulling it into is maw, assimilating its citizens and breaking its resources down for fuel.

And the world design clearly exhibits the planning and details required to make such visions sing. Like all great shared universes, the conceptual follow-through elicits fascination and excitement rather than the empty flash of concept for concept’s sake.  There are past wars that shaped the present, technologies found and lost, and a Frankenstein-like automaton (Stephen Lang) in relentless pursuit of our heroine (Hera Hilmar). He is, quite frankly, awesome, and the movie invests him with the same richness and depth as the world around him. It’s an endlessly fascinating effort, and the results can clearly support the type of grand pulp epic the filmmakers wish to create.

Unfortunately, they don’t have the first clue how to properly convey that to us. It’s quite shocking, really, considering that the producers and screenwriters – Peter Jackson, Philippa Boyens, and Fran Walsh – all won justified Oscars for The Lord of the Rings. That epic cut the Gordian knot of plot exposition right up front, with a 15-minute Introduction to Middle-Earth that got everyone up to speed quite nicely (as well as demonstrating why you pay Cate Blanchett the big bucks). The Star Wars movies pulled a similar trick with their famous opening crawls: not especially elegant, but attaining pop-culture immortality regardless.

Mortal Engines tries to get clever with that task: dealing world info out to us in bits and pieces scattered throughout the piece. It miscalculates the particulars quite badly. The climactic battle, for instance, relies on political details that it simply can’t get around to sharing with us. We get only the barest hints of the conflict before the sturm-und-drang of final do-or-die conflict. The weight of the drama is there, but it sits idle, undone by a screenplay that can’t decide when to tell us what we need to know. The experience proves frustrating when it should be engrossing and leaves us wanting more far too often for comfort. (The comparatively brief 128-minute running time may be a culprit here as well.)

The same thing happens with the human story in the middle of it. In an effort the be mysterious, the movie guts the juiciest bits, and again reveals the wrong twists and turns at the wrong places and times. Characters clash with no real sense of the stakes involved, and the skullduggery of the plot – something suitably Shakespearean about nice kids stopping a coup + conquest double punch – buries the lead over and over again. It works in the roughest sense: lurching around like one of its ramshackle city-tanks. But that prevents us from any kind of emotional investment in the characters, despite yeoman work from a bevvy of young actors to keep an eye on and another fine villainous turn from Hugo Weaving. It amounts to a lot of rushing about in a vaguely interesting manner, and while the effects are truly incredible – this one has a shot at a visual effects Oscar – they can only go so far without more of the film’s enormous potential coming to bear.

“Potential,” unfortunately becomes a two-edged sword, as we sense the film repeatedly missing its chances to connect with us. It becomes a supremely frustrating experience, though to its credit it does make one interested in reading the source novels. (Existing fans may find this a much more pleasant experience, since they come in have a better grasp of the particulars.) There’s something supremely cool going on here, and at times you can catch sight of it. But not often enough to make up for what it squanders and not coherent enough to share the magic it works so hard to create.