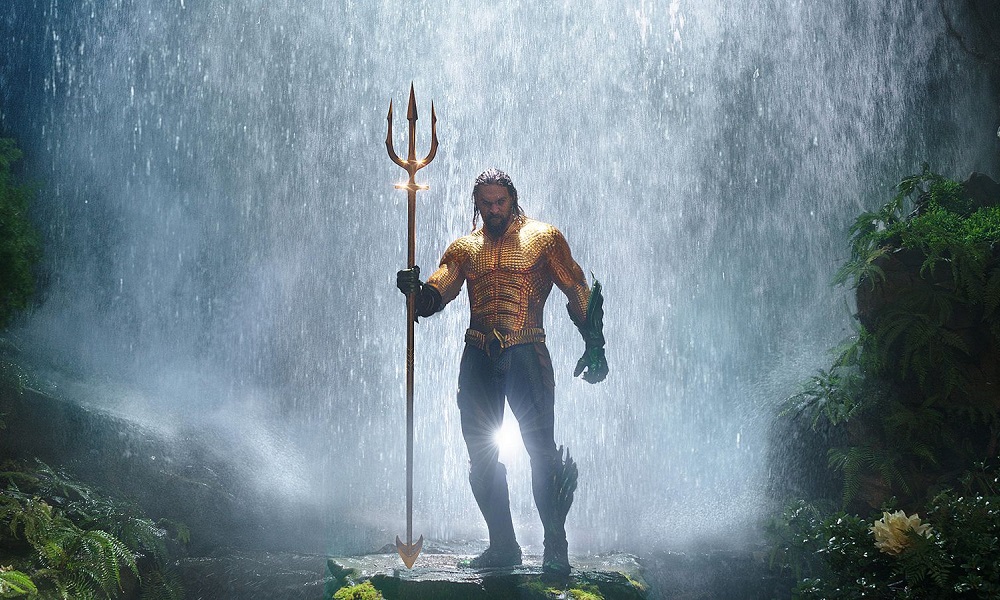 The problem with Aquaman – the central issue that his first solo big-screen adventure must contend with – is that he is, traditionally, a massive dork. His king-of-the-sea shtick carries a certain novelty value, and there’s something enjoyable about the old cartoons where he and his buddies cruised around on giant sea horses fighting pirates and polluters, but the minute you place him alongside his land-based companions, his raison d’etre becomes quite embarrassing. Earlier incarnations such as SuperFriends wedged him awkwardly into the proceedings by finding reasons to hinge the fate of the world on the ability to summon a school of carp, and his day-glo nice guy routine came across as simply a blonder version of Superman. His best appearance before now arrived at the hands of John DiMaggio in The Brave and the Bold, which posited him as a kind of water-borne Ren Fair escapee that fit in perfectly with the show’s marvelous satirical tone.

That’s of one the many challenges faced by the DCEU, which didn’t do itself any favors by tripping over its own grimdark out of the starting gate. How do you fit a guy who talks to fish into a world where the Man of Steel breaks his enemies’ necks and Batman uses a branding iron? Yet that challenge also contains possibilities, since definitive portraits of the character remained elusive until. There’s no Lynda Carter or Christopher Reeve out there to measure up to. If it plays its cards right, Aquaman might be able to turn an oyster of a superhero into quite a tasty stew.

The hard part of that equation was solved with the casting, and as with Gal Gadot, the DCEU got it just right with Jason Momoa. It marks a wise retreat from the awful pretension of Zack Snyder’s gloom while still keeping a little edge to make Aquaman credibly tough. The formula is tricky, but reasonably well defined. Tone down the barroom thug notion without losing the conviviality of an ever-so-slightly bad boy out carousing at the pub. Give him a gleam in his eye that reminds you not to take it all so seriously and a zest for the material that evokes the right sense of fun. And keep him a resolute do-gooder with just enough of a chip on his shoulder to enjoy punishing the wicked as well as saving the innocent.

In other words, cast Jason Momoa.

His coming-out party arrived in Justice League, with two glorious minutes that stand as one of that film’s high points. (And seriously everyone, call off the hounds on JL; it deserves better than it gets.)

The smartest thing the new movie does is focus on that energy and then attempt to build a story around it. It might not always work (and Aquaman is a LONG way from perfect) but if you crack the code on the character – if you can, against all odds, somehow make him cool – then everything else more or less falls into place. Sure, it often dips into sheer CG goofiness, and surface impressions matter far more to it than meaty storytelling, but as spectacle, the phosphorescent underwater cities and Lovecraftian monsters of the deep do the job nicely. That, and the pitch-perfect leading man, are enough to get the job done.

It’s a good thing too, because the plot – while not quite a mess – is so overstuffed that you need a scorecard to keep track of it. Director James Wan and editor Kirk M. Morri do a quietly amazing job of keeping it all together, but WOW there’s a lot going on here.  The villains help, topped by Aquaman’s usurping younger brother Ocean Master (Patrick Wilson in full-bore Julian Sands mode) with a very angry side order of Black Manta (Yahya Abdul-Mateen II). Aristocratic skullduggery is the order of the day, as Momoa’s Arthur Curry – the son of Atlantean royalty (Nicole Kidman) and a New England lighthouse keeper (Temuera Morrison) – must reluctantly take the throne of the underwater kingdom. Ocean Master considers him a bastard stepbrother, unworthy of his mantle, and part of Arthur agrees with him. It’s up to plucky Princess Mera (Amber Heard) to get his ass in the game and keep the seven seas safe from ambition and tyranny.

The path to the crown takes a staggering number of twists and turns, from treasure hunting in the Sahara to a dynamite rooftop chase in a Sicilian seaside town. It shifts gears with dizzying swiftness, and while we never lose track of where we are and what we’re doing, its ADD attention span can grow bewildering. The action scenes, too, get by on flash and sizzle more than substance: lacking the crackerjack inventiveness of more polished superhero films. There’s a certain grandeur to the sights onscreen, but I doubt their fizz will hold up to more than a viewing or two.

On the other hand, all of that ambition remains surprisingly self-contained, which does Aquaman a lot of credit. Beyond a quick reference to Justice League, it endeavors to do its own thing on its own terms, and while there’s a very predictable post-credits cookie setting up the sequel, you never get the sense that it bites off more than it can chew. This is a reliable stand-alone movie, not some also-ran set-up in Warners’ herky-jerky superhero franchise. Its ability to focus on the task at hand keeps its packed-to-the-rafters structure from going off the rails.

The results are cheesy and ridiculous, but also a surprising amount of fun. I don’t imagine it’s going to make many people’s all-time favorites list, but considering the task at hand, such ambition would have surely destroyed it. Momoa is in fine form, the action goes pop, and if we spot a few clichés or chortle sometimes at the elephantine daffiness of it all, it never smothers that infectious grin on its hero’s face. Aquaman is an integral part of DC Comics, but there’s a reason we haven’t seen him on the big screen before now. He gets his due here and that’s enough. In fact, it’s kind of cool. And making this character cool merits some quiet celebration.