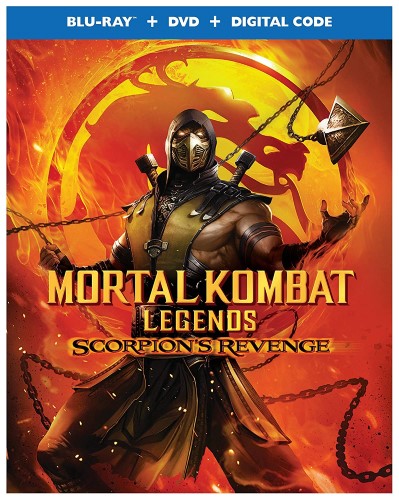 Mortal Kombat is a franchise that was always wanted to branch out. The game series began as a niche title spun off of a failed promotional tie in with John Claude Van Damme that really shouldn’t have been as astoundingly successful as it was, and once it blew up the creators felt the only way it could survive was multimedia saturation. To date MK has had two films, an animated and live action series, and plenty of games in nearly every genre. The lore has grown thick with each new installment, even if most MK properties seem to spend a majority of their time reiterating the basic bullet points of the plot.

So this is clearly an attempt at a resurrection of the brand. It’s a smaller scale attempt than before: a standalone animated feature probably not intended for theatrical release even before The Coronavirus. A new generation needs to be seized by Kombat fever to keep up the momentum for another push of the series. The last game did tolerably well. The new rumored film is in limbo.

No animation is cheap, but it can look that way all too easily. The production suffers from the Marvel and DC probably of largely stiff and limited frames of animation despite the simplicity of the designs. It looks like a cartoon you’d see on TV, not an animated production you’d see in theaters.

And the equally simple, melodramatic writing and bare bones storytelling does no favors to the feeling this is Mortal Kombat aimed at very little children. Yes, it has blood and swearing (very tame swearing), but if you cut those out this wouldn’t feel out of place in an episode of Avatar the Last Airbender or Teen Titans. It’s almost like the more mature elements (like the obsession with lingering over torture scenes) were added last minute because hey, it’s Mortal Kombat. There should probably be some blood and language in there somewhere. It feels like overcompensation.

At some point even the blood becomes so pervasive that people and creatures in the production seem to be made out of red jello. Like the games when the violence is dialed up to ludicrous is loses any meaning or impact. Maybe children might be impressed by how gutsy (cough) the blood and swearing is, but are you really marketing exclusively to kids so young they don’t realize that these elements are not longer controversial and so much a part of every form of media it doesn’t impress anyone anymore?

Emotions are dialed up to the nth degree like the actors were voicing for a commercial.
I don’t mean to sound like a purist here but to me a lot of the reason I used to like Mortal Kombat was the mystique of the stories it DIDN’T tell. The ninjas literally hid their identities and histories behind masks. Some creatures just showed up who presumably had backstories but they weren’t told compared to the larger story of the Mortal Kombat tournament itself (hence the title).

But this film seems to think not only do fans want to see the SAME origin stories told AGAIN just this time in cheaper animation and a breakneck simplistic pace, but that newcomers will immediately care about an entire cast of characters if they spend all their screen time talking about themselves (not to each other) and spend the rest of the time fighting almost useless enemies. There’s no time to breathe or for atmosphere. Nothing profound in the script. MK was never Shakespeare but this is ridiculous. It’s not even impressive as a martial arts showcase like the film was because all of the action is animated.

I actually think children might enjoy this fantasy adventure with dialogue written to explain who everyone is and what they want to do constantly and there’s even some rudimentary moral lessons and pratfalls…but children can’t watch this movie because of the blood and swearing!

Who is this made for? Fans will laugh at the dumbed down story and characters. Newcomers might still be confused because there is a bit cast and a lot of wacky ideas flying thick and fast. Fans of violence and swearing will find both so milquetoast here it’s like Disney tried to make an animated PG13 version of The Texas Chainsaw Massacre.

Scorpion’s Revenge fails to transcend its own limitations and fails even to make a truce with it’s demographics.
Samurai Jack this ain’t.

From Epic Game to Extreme Animation – Mortal Kombat co-creator Ed Boon and the filmmakers reveal the creative process behind adapting the best-selling game to an all-new animated film.

The Savage Sound Design of Mortal Kombat Legends – This hard-hitting audio exploration reveals the art of designing the sonic language of the fight scenes.

Mortal Kombatants – Dive deep inside the cast of characters to reveal their unique abilities, signature moves and backstories.

Filmmaker Commentary – Producer Rick Morales and screenwriter Jeremy Adams sit down for an insightful audio commentary that reveals the process of creating a compelling animated film based on one of today’s most popular fighting games.