Well that was certainly…weird. Produced by Dread Central, Monsterland is a horror anthology that features several short film segments and a wraparound story. The project not only utilizes film but also animation, stop-motion “Claymation”, and even, dare I say it…puppets. And by puppets I mean the type that look like they were made during a children’s TV show like Sesame Street. Monsterland embraces the bizarre! 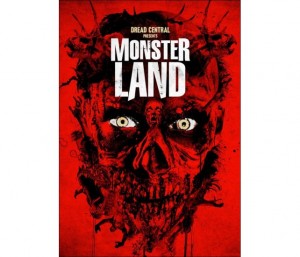 The wraparound story which kicks off the movie finds a survivor of some sort of monster attack taking refuge in his neighborhood theater, surrounded by dead bodies and carnage, grabbing some popcorn and sitting down to watch the movie. Roll a series of short films that all feature a monster theme but are otherwise not connected.

In “Grey Matter” an office worker has a huge hole in the back of his head but is otherwise normal. Normal except for the fact that his brain is missing and he has a worm-like parasite that talks and gives him dating advice about how to attract the hot girl in the office.

“Curiosity Kills” is essentially a live action cartoon. There’s no dialog other than some screams and shrieks. A little boy gets into his scientist father’s briefcase and concocts a potion which turns his rat into a super, carnivorous rat. It is beyond silly and filled with cartoon-style sound effects and sight gags.

“Hag” finds a man who begins to experience terrible nightmares and sees a withered woman in his bedroom. But what does his wife have to do with it? Easily the most terrifying of the shorts.

“House Call” features a prominent dentist who has an unwanted visitor show up on his doorstep. Armed with a gun, the man claims he is turning into a vampire and demands the dentist remove his incisors. Without his regular tools or anesthetic, he is forced to use a monkey wrench to remove the teeth. Not for the squeamish!

“Happy Memories” is the aforementioned homemade puppet sequence and honestly it’s like arts and crafts day if someone was on hallucinogenic drugs.

In “Stay at Home Dad” we find a father who stays home to take care of his baby daughter while his wife works. To earn extra money he takes part in an experimental testing program that develops breasts in men so he can breastfeed his baby.  Some Lovecraftian undertones are the highlight of this one.

Finally “Hellyfish”, my favorite short in the batch, is about giant jellyfish that attack beachgoers. These range from beach ball-sized to monstrous Kaiju-sized terrors. It’s good, cheesy sort of 1960s monster movie fun.

The wraparound sequence concludes with our lone theater patron having to flee from an attacking monster. Monsterland is uneven as most anthologies usually are. “Hellyfish” and “Hag” and the gems; “Curiosity Kills” and “House Call” are ok. The rest is forgettable. The film would have worked better had there been something to tie the various shorts together but as it is they are completely random.  I can honestly say, however, that you have probably never seen anything quite like Monsterland.