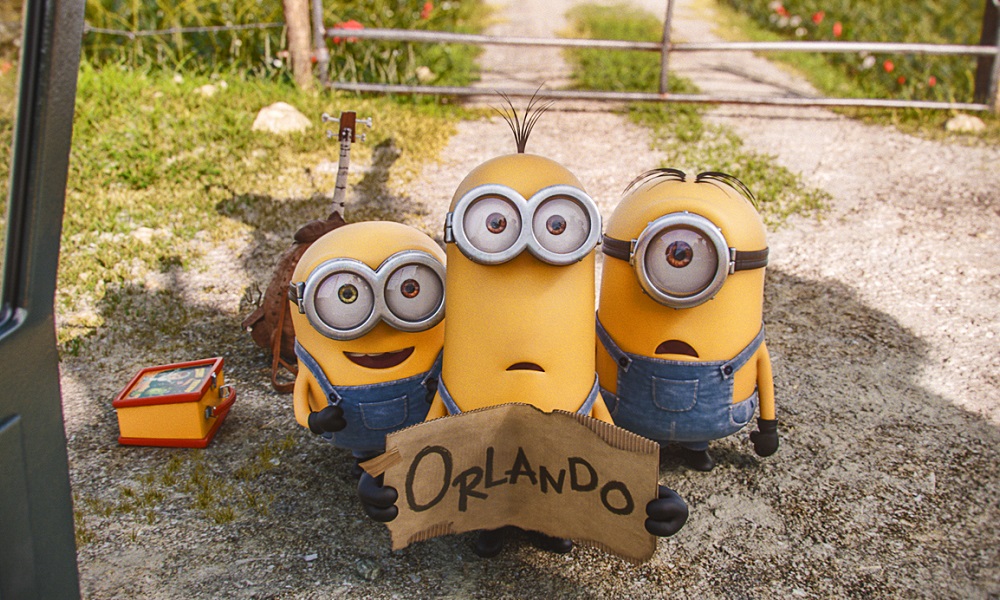 As babysitter movies go, I suppose Minions will suffice. You’d have to accept the fact that the story is a mess, but if you were looking for that we could legitimately ask what the hell was wrong with you. This is an extended Three Stooges sketch: pratfalls and silliness surrounding those cute living Tic-Tacs that helped Steve Carrell do his dirty work in the two Despicable Me films. They’re a friendly presence and we never really get tired of them, though their brand of slightly anarchic humor seems better designed for seven-minute shorts than feature length running time. Nevertheless, here they are, and while this won’t go down as the best family film of the summer, at least you won’t loathe yourself for sitting through it.

In this daffy alternate universe, the Minions have been around for billions of years: starting out as microscopic organisms in the primordial soup and quickly evolving into the weird little tribe of misfits we know today. They’re immortal and apparently indestructible, which might be scary were they not also prone to fits of well-intentioned idiocy. Their only goal is to serve a boss, but finding one isn’t as easy as it looks. After a brief recap of various employer/employee disasters throughout history, we find them holed up in a Siberian cave: bereft of hope and desperate for someone, anyone to follow. Then one of their number, Kevin, decides to venture into the outside world, joined by aspiring musician Stuart and glad-to-be-a-part-of-this Bob. They make their way to New York and then London in the swinging 60s, hoping to find a villain in need of their services.

That last part proves to be one of the film’s serious Achilles’ heels. They eventually find someone in the delightfully named Scarlet Overkill (voiced by Sandra Bullock), a smiling sociopath with an appropriately ridiculous plan to seize the throne of England from its rightful queen. Her plot hits the right notes, but the actress feels utterly out of place for the part. We loves us the Sandy, but she’s not exactly villain material and her earnest effort to fit in with the series’ tone just can’t find the right footing.

Add to that the generally threadbare nature of the scenario – a fiendish plot that hasn’t quite been thought through and a one-note goal for our heroes that can’t support 90 minutes of material – and the soup can get dangerously thin at times. The previous Despicable Me movies suffered from similar problems, but they started on firmer ground and had more resources at their disposal to see us through. Minions lacks that sense of “oomph” and while young kids likely won’t care, their parents will feel the narrative shortcomings acutely.

Luckily, that’s not quite the purpose of the exercise. These guys have their own movie for a reason, and while it isn’t anyone’s idea of high art, their antics remain amusing enough to hold our attention for the film’s running time. That may sound like faint praise, but considering how easily their shtick could get annoying, and how tough it can be to thread the needle between funny and tiresome, it’s worth noting that Minions never really tries our patience. These characters owe a lot to silent movie comics, with their amusing gibberish language and dedication to physical jokes. And while they have a long, long long way to go before being mentioned in the same sentence as their illustrious forefathers, it does lend them a certain timelessness that will hold up well to multiple Blu-ray screenings.

The 1960s setting works well too: that Austin Powers vibe that acknowledges the ridiculous excesses of the era while gloriously celebrating them. The visual style is fun and the Minions themselves fit in well with those Andy Warhol sensibilities. That gives the movie a sense of itself separate from the first two Despicable Me movies and gets it away from the slipshod sequel notion that has claimed too many similar efforts to count.

Is that enough to make it a good movie? Probably not. But it’s enough to make it a decent one, and that’s all it really needs to be. It keeps most of its modest promises and if its shortcomings stand out, you can’t say you didn’t see them coming. As family entertainment, it’s harmless and even amusing. You can’t ask for more than that, and while it doesn’t deliver anything more, its modest charms are enough to let it skate by. Faint praise, perhaps, but still legitimate. You could do a lot worse than “you could do worse,” a fact which Minions understands quite well.