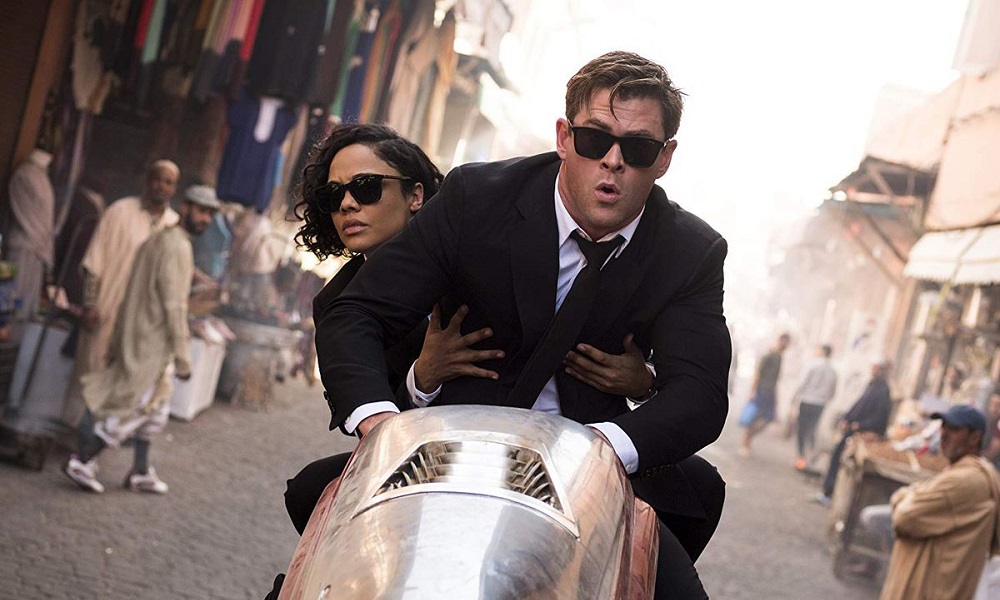 Men in Black: International is notable mainly because it applies an older model to summer blockbusters: one that was all the rage when the original movie snuck up on audiences in July of 1997. I mention that because it helps illuminate about what the film does right… and too often, where it goes wrong. MIBI is strictly filler, a charming pair of stars soft-shoeing their way through wafer-thin material held up by vaguely interesting special effects. You know: the way it used to be done.

Before Harry Potter and the MCU made multi-chapter sagas the go-to franchise blueprint, big movies hinged on star power. Call in some A-list names to put above the marquee, and you could pass any half-assed plot off as strictly optional. It wasn’t a noble trend, but it did produce its share of winners… in particular the first Men in Black, which soared on a brilliant pair of stars tailor-made for the material.

How times have changed. Back then, the first movie scored points for being good. This one goes a surprisingly long way simply by being different. There’s no larger set-up here, no three-picture arc requiring five more years’ of emotional investment. Just another threat to the universe as we know it, ably tackled by Agents H (Chris Hemsworth) and M (Tess Thompson) of the MIB. H is a former hotshot gone to seed; M is the newbie who bought in by figuring out the Men in Black’s conspiracy on her own. They team up and chase alien ne’er-do-wells around picturesque spots like Paris and Marrakesh in search of some new danger from beyond the stars.

You don’t see that formula applied very often these days, with old-fashioned movie-star charisma serving as the primary selling point. Hemsworth and Thompson have some big shoes to fill – Will Smith and Tommy Lee Jones are the stuff of buddy-picture legend – yet as with Thor: Ragnarok, they prove very ably up to the task: egging each other on in just the right ways and gamely swapping straight-man duties based on who can get the biggest laugh out of it. MIBI may be an utterly forgettable movie, but they keep your eyes fixed on the screen most of them time.

That’s a good thing because the characters themselves prove surprisingly thin as written. The Men in Black movies never went too deeply into their heroes’ personality, but here they feel like barely supportable cardboard props. It speaks volumes that the stars bring so much energy and personality with them: all the more so because they have comparatively little to work with.

And once you get past them (and the magnificent Emma Thompson owning her all-too-brief scenes as O), the film offers nothing but slightly blander variations of gags from earlier movies. The MIB’s snazzy gadgets, the aliens hiding in plain sight, the whole world-beneath-a-world that’s made this series reasonably reliable fun… it’s all on display here, but none of it feels very distinctive or different. Not strictly bad, just the sort of material you’re apt to forget by the time you finish the drive home.

The villain too, fails to pass muster, especially with the likes of Vincent D’Onofrio and Jermaine Clement in the series’ past. Here, it’s an amorphous blob with the ability to imitate others: not especially interesting in and of itself, and further undone by multiple plot twists that advertise themselves far too often and far too soon.

The change in setting doesn’t help much either. Earlier films benefitted from the running gag that no matter how much the alien weirdness piled up, jaded New Yorkers treated it like just another Tuesday. That doesn’t fit nearly as well into the new spots on display here, and while the movie has a bit of fun with some very English oddballs, too much of the sparkle goes out of it. For better or worse, this universe just fits the Big Apple.

And again, none of it’s strictly awful. The story moves along well enough, the effects work, and the leads are tons of fun to get into trouble with. And yet so much of MIBI remains remarkably unsatisfying. It does the bare minimum to justify the exercise and declines to rise any higher than it needs to. Times were, a movie didn’t need much more. But times have changed, and despite some enjoyable elements, MIBI hasn’t changed nearly enough.