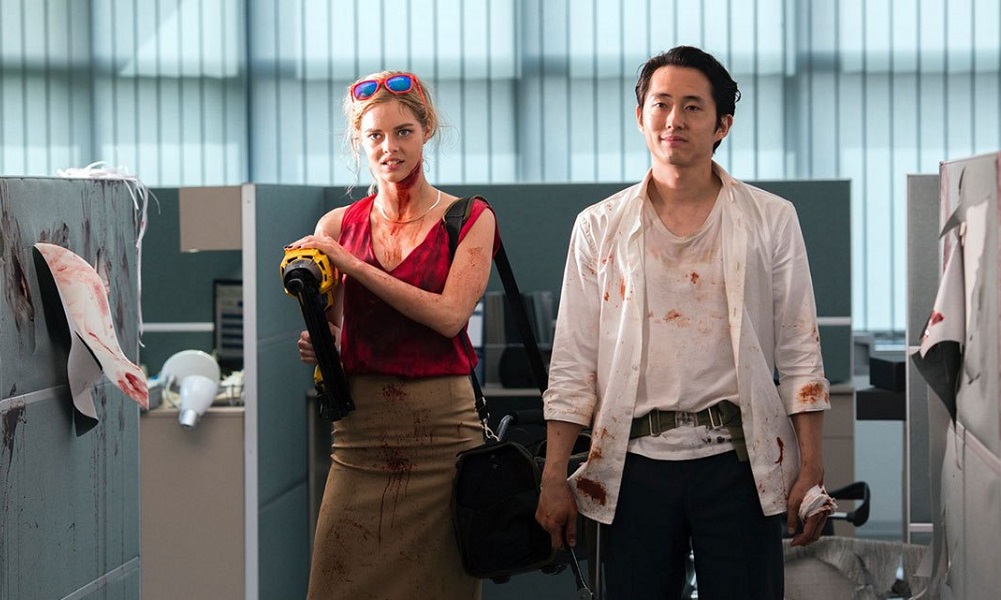 B-movies like Mayhem thrive on simplicity of premise and superiority of execution, which is another way of saying it focuses on one thing, and then tries to do it as well as possible. The magic lies in what it does with the concept, rather than the concept itself. It entails another zombie-survival-style horror comedy, with the requisite bit of social bite that may perhaps feel a bit more pertinent this holiday season. Were that all it had going for it, it wouldn’t merit much attention. But it does so with a strong script, a good sense of timing, and the kind of anarchic glee than more prestige projects can’t manage.

It also benefits from Stephen Yeun, no stranger to blood-and-guts projects, whose departure from The Walking Dead left lingering scars. (The show has yet to recover, ratings-wise; I dropped the show when his character died.) His presence in the lead here reminds us why we liked watching him so much, as well as taking a much different approach to what could have been a slightly-more-cheerful reboot of the same basic kill-the-walkers formula that put him on the map.

This time, he plays a formerly idealistic young lawyer who has spent too long in the trenches doing the dirty work for his thoroughly unscrupulous firm. Among their other accomplishments, they – and he — successfully argued that victims of a troubling new “rage virus” are not responsible for their actions. The virus doesn’t permanently affect people, but while under its influence, their id gets a free pass. No inhibitions, nothing preventing you from, say, taking a staple gun to your boss’s face… just a mind delightfully pure of impulse control. Legally protected impulse control, thanks to the firm it’s about to hit like a wrecking ball.

As a wrinkle on the basics, it holds a lot of potential. Establish a horrible office culture, set a conveniently ironic virus loose in their building, lock the doors with the SWAT team outside, and let the pressure-cooker do what desperately needs to be done. Yeun’s Derek Cho makes a good guide for the bit of the old ultraviolence that follows: framed by his bosses for a rotten deal that went bad, and on his way out the door when the virus hits. He’s joined by another of the firm’s victims (Samara Weaving), initially there to plead against the foreclosure of her home, but happy enough to join in the bloodletting once the madness descends.

Subtle, it isn’t, but the dialogue holds a lot of kick, and our two protagonists make sympathetic fill-ins to let us quite literally stick it to the Man. That, along with the creative gore, makes good on every one of Mayhem’s promises and delivers a solid horror-comedy in what could have been a bland also-ran. It knows how to give the violence a subversive kick without simply drowning us in gross-out moments, and the manic energy on display becomes very cathartic to anyone who’s even been in a stressful work environment.

That forms the crux of the movie’s social satire too, and though it’s low-hanging fruit, it doesn’t feel any less timely or pertinent. Those standing above Cho are the usually gang of corporate weasels, but they’re delivered with flair, and their barbs hit home more readily now than they might have a short time ago. Corporate greed never goes out of style, but the casual inhumanity Mayhem wants to skewer feels right at home in our current political climate. “We have it coming,” the movie tells us like a number of zombie movies before it. But it finds a way to remind us in a unique – and extremely entertaining – fashion, as well as reminding us that while Glenn may be gone, Yeun has no intention of going anywhere.