I was watching Mary and thinking ‘boy, this one actor is really channeling Gary Oldman’…Then I realized…that IS 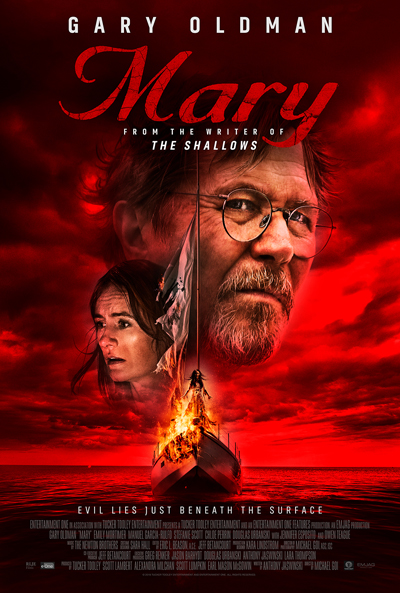 Gary Oldman. Somehow the guy who’s been part of practically every major film franchise of the last couple of years is slumming it in this polished but somewhat predictable drama/horror on the sea romp. Gary has so much passion and experience he acts every other performer off the screen. You wonder what he saw this this production. A chance to play a different kind of character (more of a troubled family man than his usual gruff leader or eccentric role?)
Maybe it was for the paycheck? Maybe he just likes to work so he took the gig to keep in practice?

I’ll say one thing certainly: Gary seems like a fun and giving guy to work with, despite his celebrity.
Mary is not terrible by many metrics. The plot is not directly comparable to anything yet harkens back continually to other movies. A quixotic dreamer in search of reconnecting to his wife and daughter purchases a mysterious boat which carries his daughter’s name: Mary. We’ve already seen early from the cold opening not all goes well ultimately so this is one of those inevitable downfall mystery type features.

It’s similar thematically to something like The Shining. A conflicted but surface-level-ideal family driven to distraction and tragedy by cabin fever, and possibly some other more sinister influences. And by ‘possibly’ I mean definitely. This would probably benefit from a psychological possibility. Even in The Shining although the supernatural is practically confirmed, there’s enough doubt to suggest a degrading mental state or secret guilt in destroying the good people the audience is introduced. But very shortly into Mary we get full on confirmation that the ultimate answer is ‘ghosts’.

Fine and dandy for a genre film, but the quality of the camerawork, the caliber of the guest star, and the surprising subtlety of the music and slow pace of the film seem to be a tier above the constant cheap jump scares and goofy ancient lore. A compliment for Mary could be the pieces are much greater than the sum of its whole. This kind of quality craftsmanship feels strained set up against the tropes (creepy children’s prophetic pictures, abruptly awakening from nightmares, on-the-nose dialogue…etc).

The genre feels like it’s trying to evolve. But someone, likely someone in marketing who thinks all people want is the same things over and over again, won’t let it. Gary gives his all, the others do their best, and the cast and crew are on point but Mary can’t cast aside the curse of the B-movie. You want to see another spooky midnight flick with higher than normal component parts you might take a brisk little trip on the floating haunted house ride.
But it will all feel very familiar, and it doesn’t quite justify itself as a franchise.