Haunted house films are a dime-a-dozen but you don’t see many haunted sailboat films. Gary Oldman stars in the 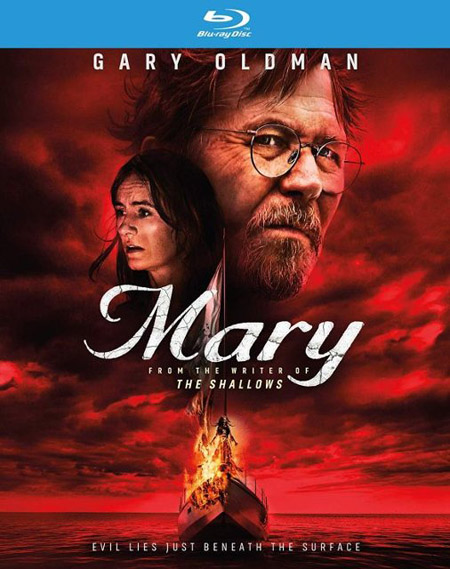 film about a struggling sailing captain named David who works for a charter company but longs to buy his own boat and start his own business. His opportunity arrives in the form of an old, abandoned boat named “Mary” that is recovered off the coast of Florida. Without consulting his wife Sarah (Mortimer) he buys the boat at auction, leveraging his home in the process.

With the help of his friend Mike, David and Sarah get the vessel ship-shape and and take it out on their maiden voyage along with daughters Mary, Lindsey, and Lindsey’s boyfriend, Tommy. Not long into the voyage to Bermuda the family begins experiencing strange phenomena. Tommy is found on the deck injured and in a daze and attacks David. Seemingly driven to madness, Tommy is dropped off with the authorities at a Caribbean Island as the family continues its voyage.

Things go from bad to worse as they continue on as an unearthly presence takes hold of the family. Sarah finds old documents hidden in the ship and discovers the tragic and horrifying past of the ship and its previous voyages that have resulted in doom for all aboard.

The first problem we have with Mary is that it is one of those films that are told in flashbacks. At the opening Sarah is being interrogated by a police detective about what happened to the boat and her family. It gives a way the film’s ending, or at least what happens to her family, and the rest is simply relating the journey about how she arrived where she is now. I’ll admit I’ve never quite understood this style of storytelling. As Sarah relates her story to the police they become more and more convinced that she is a murderer and killed her own family.

Mary uses all the usual haunted house tricks…there are plenty of jump scares, the young daughter who has an imaginary friend and who starts drawing creepy pictures with her crayons; the obstinate husband who passes the events off as nonsense. There’s not much new or original to be found in the film other than its setting and that novelty wears off quickly.

Despite the bulk of the film taking place in flashbacks, we learn precious little about who or what is haunting the vessel or why. It seems like this was an afterthought in favor of cheap thrills and played out tropes.

But not all is bad…The film features fine performances from the always reliable Oldman who is a consummate pro even in a lackluster production. Emily Mortimer is also quite good as the mother who will do whatever she can to protect her family.

The cheap and inexplicable ending that was both a surprise and yet not surprising puts a capper on a dull production that had a good idea but failed to capitalize on it.

The Making of Mary featurette
Family at Sea: The Cast of Mary