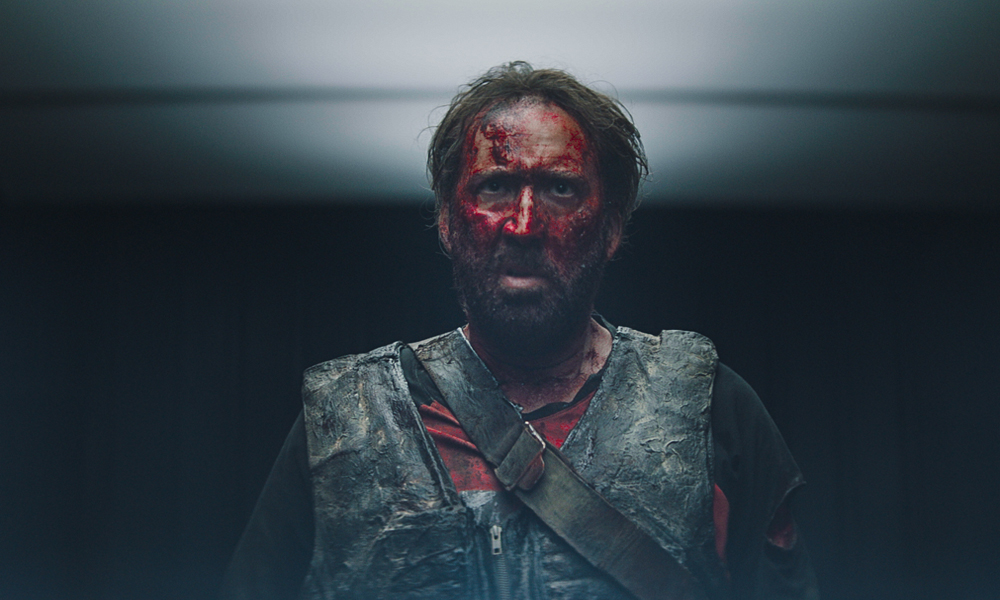 It’s not often I say that “I’ve never seen a film like this before,” but Mandy is one of those times. It’s a movie that doesn’t lend itself to an easy description and must be seen to be appreciated. At its core it is a standard revenge film but that is only a small part of the story.

Set in 1983, Nicolas Cage plays Red Miller, a Lumberjack who lives with his girlfriend, Mandy, in a remote, small cabin in Washington state. Mandy, a bit of a hippie type, works as a cashier in a convenience store and loves to read fantasy novels. While walking home, Mandy is passed by a van of cultists known as The Children of the New Dawn. The cult’s leader, Jeremiah (Roache) is instantly smitten by Mandy.

Jeremiah and his group of followers summon a group of demon-like bikers, driven mad and homicidal by a powerful liquid form of LSD. The group converges on Red and Mandy’s home, tying up Red with barbed wire. Jeremiah seeks to seduce by playing some of his terrible music but Mandy laughs at him, enraging the cult leader into an unspeakable act of violence. His life in tatters, Red goes on a bloody crusade of revenge against the cultists and their biker allies.

In many ways, Mandy pays homage to the grindhouse revenge films of the 1970s. It never holds back or lets up in its wanton, blood-drenched violence. To the contrary, it turns up the volume and keeps amplifying it to the very end. 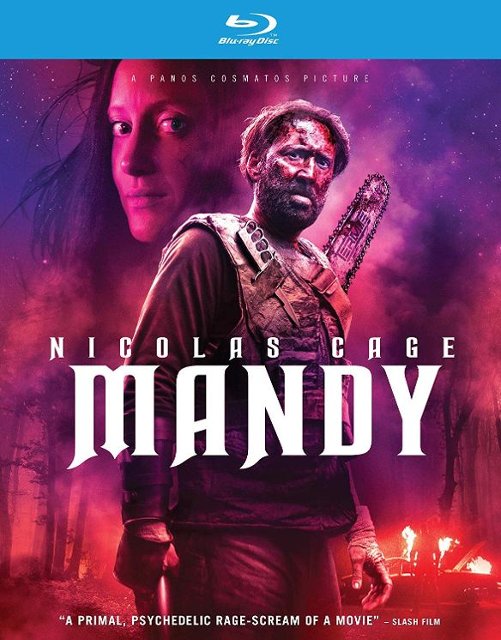 But what sets Mandy apart from films of a similar ilk is its creative direction by Panos Cosmatos. Cosmatos employs everything in a Director’s bag of tricks and a few things that aren’t. The use of monochrome color schemes, psychedelic imaginings in the form of natural settings like ripples on a lake or flames; slow-motion filming; animated sequences, and hallucinogenic horrors all lead to a unique viewing experience. Admittedly, it can at times lead to sensory overload but ultimately Cosmatos brings it all together in the end.

Nicolas Cage’s personal issues with money have been well documented. The once “A” list actor now finds himself taking any role he can to pay off his tax debts and as a result has found himself in a lot of bad, direct-to-video releases in recent years but Mandy is not one of them. In fact his performance here shows that Cage can still be a top star. He doesn’t overplay his role as he has in the past and instead rides the tide of Cosmatos’ vision. It’s an over-the-top character but not an over-the-top performance.

Linus Roache is equally brilliant as the ego-centric cult leader, heavily influenced by Charles Manson, even down to being a failed folk singer. He seamlessly shifts from being vulnerable and fragile to megalomaniacal and sadistic at the drop of a hat.

In a small but fun role, Bill Duke plays Caruthers, a mysterious friend of Red’s who assists him on his quest for vengeance. You may remember Duke from the 70s and 80s playing various “tough guy” roles in films such as Car Wash, Commando, Predator, and Action Jackson.

Visually striking and unique, Mandy is a movie that is certain to become a cult classic, no pun intended, and hopefully a film that will put Nicolas Cage back on the map as an “A” list actor.