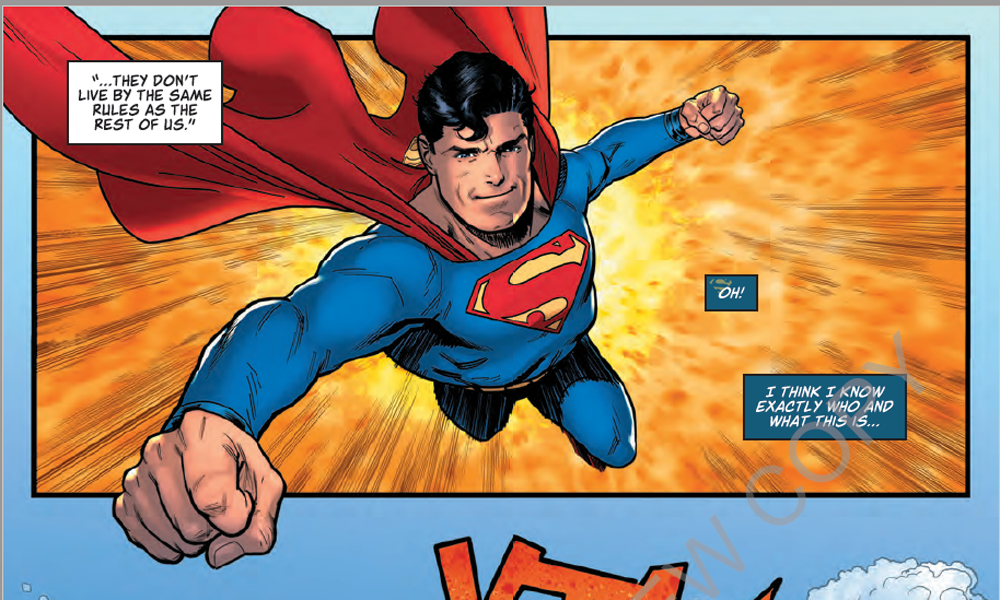 Unsubtly suggesting during its cataclysmic prologue that Krypton’s destruction was the genocidal work of an enraged Rogol Zaar rather than an unassuming intergalactic tragedy, Brian Michael Bendis’ script for the rest of Issue Two of “Man Of Steel” sadly struggles to maintain any semblance of direction once Appa Ali Apsa has finished chiding Lord Gandelo for falsely accusing the Green Lantern Guardian of wilfully permitting Jor-El’s homeworld to be disintegrated. Indeed, considering that this twenty-four page periodical requires the pencilling power of three different artists, including Evan “Doc” Shaner and Jay Fabok, it is arguably difficult for any reader to become immersed within an adventure whose choppy sub-plots prove to be as inconsistently crowbarred together as its contrastingly-styled illustration work grates upon the senses.

Admittedly, the five-time Eisner Award-winner’s inclusion of the Toyman as the comic’s ‘central’ villain makes for a straightforwardly fun bout of fisticuffs between the titular character and the portly genius’ transformer-tall giant robot; especially when the criminal’s all-too easy incarceration by “the Metropolis Marvel” leads to a brief cameo appearance by Hal Jordan. Yet such an absurdly amusing sequence, which includes the defiant bespectacled eccentric being surrounded by a power ring’s “sound-proof bubble” hard-light construct so as to stop Superman from having to listen to the rogue’s relentlessly unjust tirade against him, badly jars when following on from this book’s highly theatrical opening, and then disconcertingly leads into a similarly intense sense-shattering sequence depicting Clark Kent’s frightened family suddenly facing a fearsome-looking mechanical menace; “Dad, what is that? Dad, what is that? Dad? Dad, what is that?”

Similarly as stupefying is this publication’s bizarre inclusion of a cantina scene seemingly lifted straight from a discarded Seventies screenplay drafted by George Lucas for a certain “American epic space opera media franchise.” Fizzing with all manner of extra-terrestrial heavy-drinkers and bizarre-looking beverages, as well as the utterly mystifying presence of a Rubik’s cube, the celebratory exchange between a barmaid and (presumably) Zaar is supposedly meant to portray the “alien who claimed to have been responsible for destroying Krypton” dramatically discovering that one of his hated foes, “zuppermen”, fortuitously escaped his murderous plan “as a baby.” Instead however, partially due to Steve Rude’s cartoonesque storyboards and Alex Sinclair’s gaudy colour choices, this pivotal plot point disappointingly somewhat smacks of simply being a silly, tongue-in-cheek inclusion, which rather than heighten any tension caused by the appearance of this mini-series’ main adversary, utterly dilutes the comic’s already ever-evaporating atmosphere.