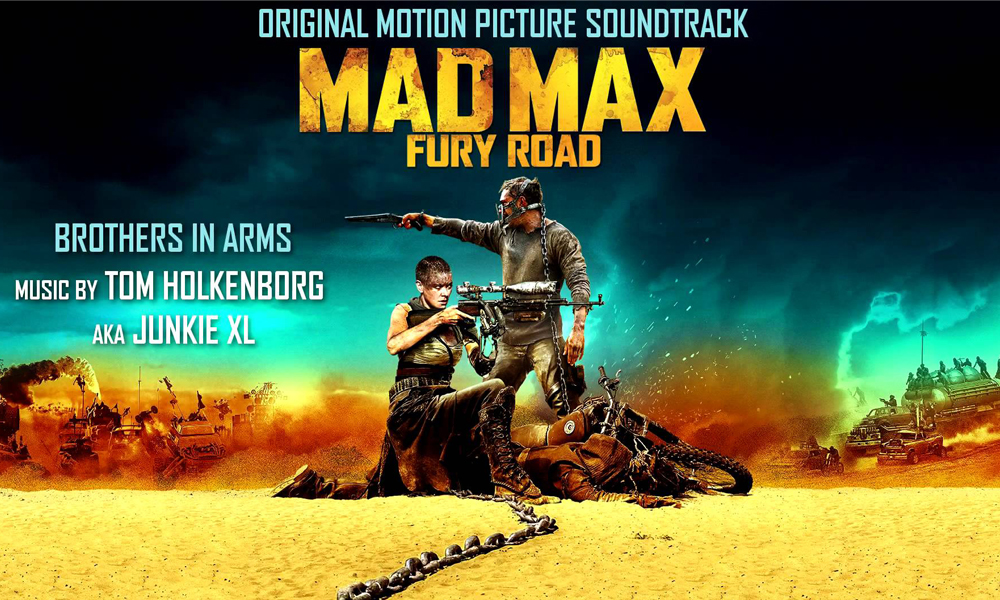 Mad Max: Fury Road is a strange sequel/ prequel/ 2.5/ fourth installment, as soundtracks go. The first two films were done by Brian May (Mad Max and The Road Warrior). The immortal Maurice Jarre did the third. The three films combined do not have a coherent musical theme. For example, despite John Williams not continuing on with the Harry Potter saga, his theme is still present and adapted to the new composer’s work. That theme (Potter’s) is synonymous with the films. To add even more confusion to the mix, director George Miller had to find another composer as both Jarre and May are no longer with his. Who should step into their shoes as the composer for Miller’s latest post-apocalypse thriller? The answer is a musician who goes by the moniker, Junkie XL.

The Dutch born Junkie XL is better known as Tom Holkenborg. Perhaps you heard his work on 300: Rise of an Empire or Divergent. If not, he is currently working on Batman v Superman: Dawn of Justice. It is in that film that he will join the legendary Hans Zimmer in composing the score. Oddly enough, Junkie XL’s score for Fury Road sounds like one Hans Zimmer would have composed. Well, if Hans Zimmer was on steroids.

Since the Mad Max films do not have a running theme, I’ve decided to split up my review for before and after seeing the film. Can the score stand on its own? Does it need the visuals to supply the complete story? I intend to find out.

I’ve had the soundtrack for a while now and it immediately reminds me of Hans Zimmer’s The Dark Knight and The Dark Knight Rises. The music is balls-to-the-wall insane with pounding drums and a chaotic fever that is worthy of Mad Max. Early on in Junkie XL’s score, he introduces a theme to the film, a heavy set of strings that sound like a musical engine getting started. Yet by the second track, “Escape”, the insanity that roams freely in this world slaps you across the face with its indifference. Those strings return to spin you down the drain faster than you could ever hope to keep afloat.

“Brothers in Arms” is another track that I gravitated towards quite often. By “gravitate towards”, I mean play over and over again. It supplies enough action, musically, to make any Michael Bay film look like the Care Bears having high tea. Yet at the 3:00 minute mark, the piece becomes heroic and hopeful. Is this the moment Max puts his foot down? Does our hero of the wasteland get into the fight? It’s an incredible piece and completely worth the replay.

“The Bog” is by far the longest track on this soundtrack (12:32). Here you will find car engines and explosions turning on and over lying underneath the sound of the drums. This is a great device for a film’s score and fit perfectly in Daft Punk’s Tron: Legacy. I cannot wait to hear this piece in the film.

As I had mentioned before, this score sounds very much like it’s in the vein of Hans Zimmer. “Many Mother’s” surprised me, as it is not one of the many pulse-pounding tracks in score. In fact, it is a sorrowful piece that leads me to believe that this film may have a heart to it, as well. Much like the insanity of Hans Zimmer’s Gladiator score, which blended combat and spirituality, I found Mad Max: Fury Road to have these qualities, too.

This is the must have score of the summer. The strings only intensify the action on screen. The visuals in Mad Max: Fury Road are insane and this score only pushes things further over the edge. Junkie XL has pushed himself to the forefront of new musical talent for the action movie music genre, though he might have been there all along just hiding in the shadows. Upon further investigation, I learned he did additional work on both Zimmer’s Man of Steel and The Dark Knight Rises. If you loved Miller’s latest foray into the Mad Max universe, this score is simply a must-have for your soundtrack library.

For more details on Mad Max: Fury Road soundtrack check it out on WaterTower Music here.